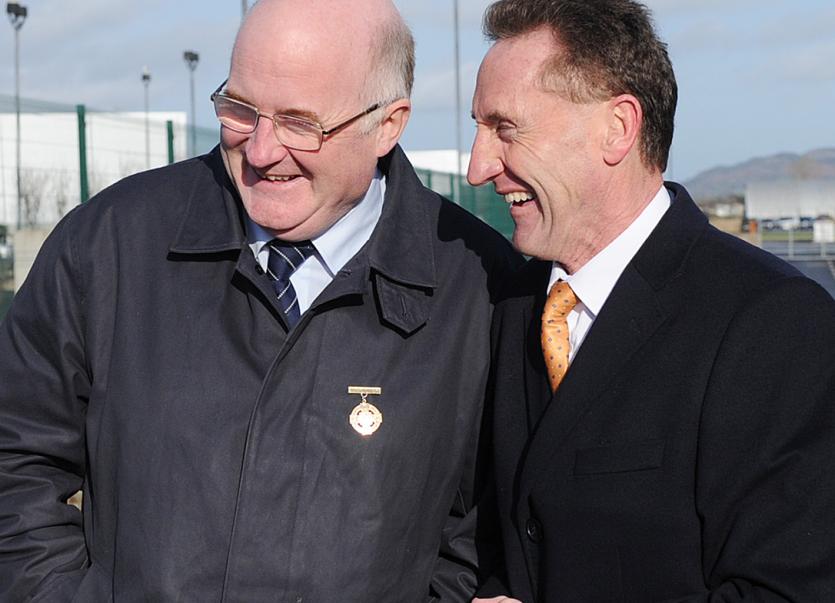 John Horan has formally pledged his support to Louth’s new stadium development in Dundalk having turned the sod on the Inner Relief Road site on Monday afternoon.

The GAA President insists the project is “one of our priorities going forward” and questioned the government’s decision to recently reject Louth’s application for a sports grant to help with the ground’s preliminary works.

“I’ll certainly be looking to this as one of our priorities going forward,” Horan told the significant congregation present.

“There’s been a lot of false dawns. My first meeting as chairman of Leinster Council was with Pádraig O’Connor to try and resolve the issues with Drogheda and here we are six years on with another chairman (Pat Teehan) taking up office in Leinster.

“I’m delighted to see such a crowd here this morning - it gives me heart - and if the people of Louth put their shoulder to the wheel, we, with Leinster, will help you to drive this on.

“I think the government have to step up and provide support for Louth. I’m hugely disappointed that you didn’t get funding in the last few weeks and I think it’s remiss on the part of the sports department that they didn’t support you.

“In a way I think this is a special case because there isn’t a proper county ground here in the county.

“When you look at the work that the GAA do within the community - all the 41 clubs we have here in Louth and what they’re doing for their communities - if the government were to try and compensate for that if the GAA wasn’t there in the morning, the funding would be huge.

“I think they need to realise what we, as an organisation, do for the communities within every area and that they owe it to Louth to come up with the funding to drive this on.

“I think it’s a very obvious need in this county to have a proper facility for the county, but we’ll be doing all we can. I’m not standing here with a cheque or an amount, but by God we’ll give it every bit of support we can.”

It’s understood that the GAA are willing to fund as much as two-thirds of the projected €12 million build price, though, despite committing to the development, Horan insists a portion of the revenue will have to be self-generated. Thus, he gratefully acknowledged the two house draw which is currently ongoing.

“We will do our best,” he said in regard to finance. “We don’t have a bottomless pit of funding and we’ve a lot of other areas looking for funding from us, but most definitely, the fact that Louth just don’t have a stadium makes it an important case that we should do our best to drive this forward.

“Between ourselves, Leinster Council, the team here in Louth and hopefully the government we’ll get the funding in place to drive this project on.

“If people are seen to be working on the ground it’s very easy to come in and support them. If it’s the other way around, that people just feel it’s going to be a handout, that won’t work for anyone and the funding won’t arrive.

“But I don’t think that’s going to be a problem here. You can see the enthusiasm and from what I’ve seen of this project in its initial stages, I think the right people are driving this on and we will actually get there.”