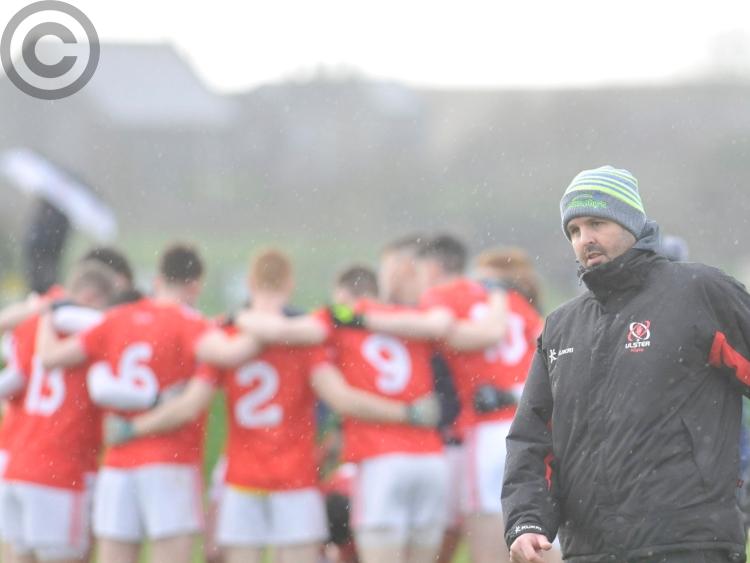 Louth sensationally booked a place in the Leo Murphy Cup final on Saturday, their victory over Antrim in Dunsilly, coupled with the drawn clash of Tyrone and Down, earning The Reds a shot at Mayo next weekend.

The qualifying win was hugely impressive on a number of levels, not least given Aidan Shevlin’s side found themselves trailing by two points entering the dying embers, having led by a half-dozen at the interval.

Antrim were, ultimately, much improved in the second half and when their goal eventually came, The Saffrons were totally on top as Louth struggled for relief. Not that the match referee was aidful of the visitors, with a string of hugely questionable decisions going in favour of the Ulster side.

The whistler’s most contentious spell gifted Rory Brolly, son of former Derry star Joe, the chance to give Antrim the lead for the first time amid the closing quarter. As Louth pleaded for a decision in the aftermath of a midfield incident, a delivery into Brolly saw him call for a mark, standing still with his arm raised.

But with the pass having come from within Louth’s 45-metre line, and thus not worthy of the benefit of the new rule, the Antrim forward raced from his static position, overcarried and yet somehow was still the recipient of a free. He missed his kick, but the man in the middle gave him another opportunity after deeming Nathan Sutherland to have been too close.

Such bizarre episodes were commonplace and Louth continually on the brunt end.

Minutes later, the match appeared to be gone from The Wee County, trailing 1-10 to 1-8, but after Antrim lost players to red (for a strike) and black cards, Louth upped the ante, with Conall McCaul and Ciarán Keenan, the winners’ outstanding forward duo, contributing significantly to the turnaround.

A victory which was deserved on the balance of a titanic hour’s football, Tom Jackson was another of the Louth heroes and it was the Ardee player’s powerful, 21-yard drive which delivered his team’s goal, on the eve of the interval.

It must also be said that the triumph was in spite of captain Ciarán McMahon’s injury-enforced absence. Should he recover in time for the encounter with Mayo, The Reds will have a good cut at garnering welcome silverware.