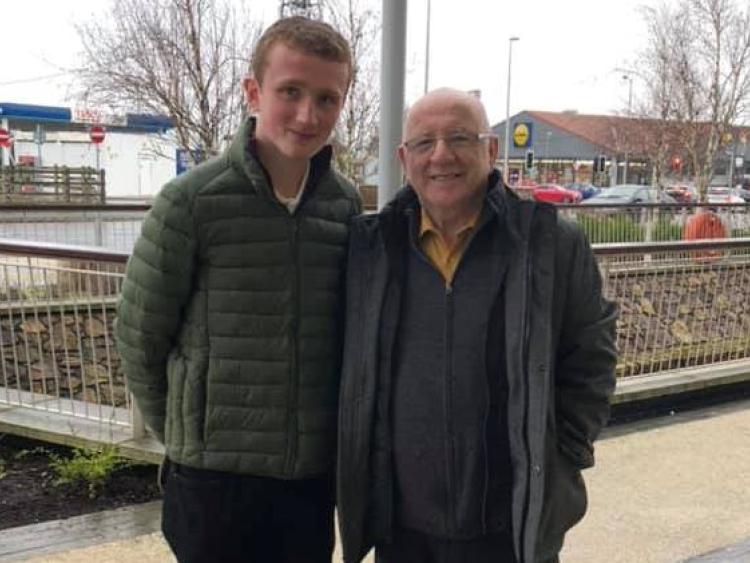 Tommy Smyth is an extraordinary character and Knockbridge’s most famous export. At 74, he’s still working as hard as ever, analysing everything from the Super Bowl to a snail’s race. Maybe it’s because, he jokes, he leaves the Galway Races annually with empty pockets.

A get-together which has been in the making since a phonecall conversation lasting long enough to keep a Vodafone call centre operator in a job, contact was made just before Christmas and a date subsequently set.

Home with his wife, Treasa, they spent Christmas in her native Cork, having landed on December 19, the day of his birthday, which is unfortunate, really. “I only ever got the one present…”

Having travelled back on Sunday, Tommy was across the US’ airwaves yesterday, his Grumpy Pundits programme, which is broadcast on Sirius Radio, reaching all corners of the land of opportunity. Former England international Marsh is his co-anchor and the man who gives callers the boot if they’re talking via their behind on anything sports related. “It’s a badge of honour”, which earns them their fair share of rubbish-talkers.

Their show has a huge followership and Tommy remains as forthright as ever. He shook his head when recalling how he “recently blew a gasket” over VAR. “The Brits don’t want to be told what to do,” he says, “why doesn’t the referee just go to a screen and make his decision?”.

It’s not bad for a fella who fled the Emerald Isle in 1963, when “there were just nine houses in Knockbridge”. And he’s as proud as punch. He started an Irish radio programme in 1969 and it remains on air, after 50 years. Tommy went so far as to keep it running when he temporarily returned to Ireland in the early 70s. His wife now presents it, and has done for the best part of two decades.

That was after ESPN ramped up the demand for the commentator’s services. And he remains a man high on people’s agenda. BBC often command his services for some insight around international time, while he’s Amazon’s front and centre when it comes to Thursday night NFL games.

Retirement isn’t really an option with all the clamour, and that in itself is a source of comfort. Meetings with David Beckham and his old friend Stevie Nicol, who he starred with for years on Press Pass, come to the fore, prior to the disclosure of events surrounding his first calling of the Champions League final, in 1997.

Puttering around Munich’s Olympic Stadium the night before holders Juventus took on Borussia Dortmund, he got an approach from the Old Lady’s boss, Lippi, who asked him to retrieve footballs for his team from the gullies kissing the outside of the running track.

And so Tommy obliged, reliving his Bride’s playing days, catching and kicking back to Del Piero, Vieri and the lads. “Not bad for a man from Knockbridge”.

The next night he was joined on the mic by Fergie, as the second half unfolded. The Man United boss had favoured Juve, but Lars Ricken’s late third sealed victory for Dortmund and, Smyth says, led to the emergence of Ottmar Hitzfeld at a top-class manager. Paul Lambert, the Scot who is now the head coach of Ipswich Town, gave a masterclass that night, he recalls.

And for almost 20 years to follow, Tommy presided over ESPN’s coverage of every Champions League decider. Name the stadiums, the nights, the games, and he was there.

Not that it’s been all plain sailing. He once looked after a Louth championship game involving Stabannon Parnells in which he described a player as kicking the ball “in to touch”, as opposed to over the sideline. Attending another match later in the day, an infuriated listener lay in wait as Tommy landed at the entrance gate. “Are you Smyth?”, “I am”, “you’re a disgrace”. Nice.

On another occasion, at the height of the season, he told listeners to a game in Navan that there was snow falling. It’s likely there wasn’t, but several people other the years have randomly put it to him: “Was it really snowing?”.

Donald Trump, he reckons, will get another term as US President and while reluctant to predict his Democratic rival, given he “got it all wrong the last time”, Michael Bloomberg, he feels, will be his opponent.

Next on the list, Frank Lynch. How’s the former All-Ireland winner doing, Tommy wants to know? Well, on the evidence of the passion he spoke with at the Louth GAA house draw launch, great, I suggest.

At that point a woman wearing a top sporting the name of a horse racing stable walks by. “I wonder has she got any tips for Dundalk tomorrow night?”. Which leads us to a tale about his yearly pilgrimage to Ballybrit for the races out west. He used to go with a man called McArdle from Knockbridge, and has been there on roughly 50 occasions since his emigration.

His fortunes with the bookmakers are almost on a par with Louth GAA at the moment. “It must be difficult for you trying to cover the games?”. A labour of love, ultimately. I warn, though, that the new regime will improve things. We nod in hope.

Retirement is again mentioned, as is the book he’s been meaning to write, before we land into The Democrat’s office for a chat with the others. And then a story to top it all off. He heard the shot that killed John Lennon, a former Beatle, and was within listening distance of Mark David Chapman making his admission of guilt.

“Not bad for a man from Knockbridge.”