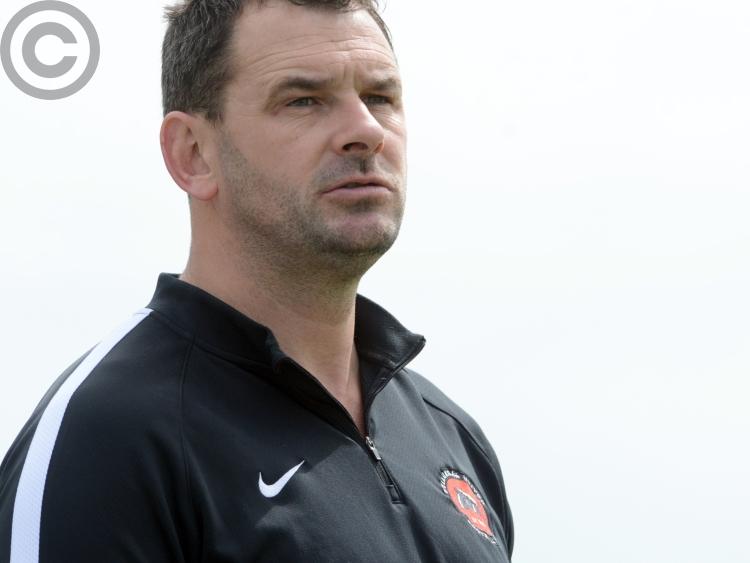 Pádraig Gollogley has defied the saying and gone back, having been re-appointed Bellurgan United manager ahead of the new NEFL season. (Pic: Ciarán Culligan)

Pádraig Gollogley has defied the saying and gone back, having been re-appointed Bellurgan United manager ahead of the new NEFL season.

The former Dundalk FC defender jokes his decision to return has two-fold benefits: he’s back involved in the game he loves, after a break since leaving Rock Celtic, and his wife will have more “peace”.

Though it says much for Gollogley’s previous stint at the helm that the peninsula club’s committee head-hunted him for a comeback. Manager during the 2016/’17 season, United finished third in the Premier Division, going ever so close to the league crown, while losing in both the Tully Cup and Kilmessan Shield deciders.

“We hit the post three times,“ he describes his prior campaign at the helm.

“Fatigue sort of set in that year, with a small but great squad.

“Bellurgan is somewhere where there is a really good group of young players and that’s where I love to get involved. When I got the call I was really interested and decided to go back and give it a crack and see can we do something.”

Gollogley took “his little break” over the past 12 months, since steering Rock Celtic to top-flight safety in the second of his seasons at the helm, having taken Division One glory in the spring of 2018.

He describes both Rock and Bellurgan as “good clubs” that have a tendency towards graduating their own into the first-team. Achieving that and building a solid group is what he hopes to achieve over the year ahead, and potentially into the future.

“The age dynamic is far different to my first time at the club,” Gollogley adds.

“In the last few years there’s been a lot of younger players coming through and with the Summer League starting up and helping to get younger lads back playing, it’s great.

“The immediate expectation is to play a good brand of football, be competitive and stay in the Premier Division, while maybe getting a run in a cup, the Kilmessan or the Tully.

“But it’s really about taking young players now and putting them on the pathway to us having a really good club five or six years down the line; developing a good culture and having a winning mentality.

“We are very lucky that (experienced) lads like Fowler (Ciarán Sheelan), Ray (Finnegan) and one or two others will stay around. And then Stephen Finnegan, who’s in his early 20s, but has played football since I went there first and has a lot of experience.

“The younger lads have done well so far, coming third in the league under Jason (McConville), and now it’s about trying to add one or two bits to the base and pushing it on.”

Reflecting on what was perceived as a poor Premier Division performance by local clubs last season, Gollogley said: “There’s not many really good players knocking about, but there’s quite a few really good clubs.

“In Dundalk we’ve seven or eight really good clubs, whereas Trim (the champions) has one good club. There’s a massive dynamic there where Alan Murphy (their manager) has the choice of the surrounding area; Navan Cosmos had gone, and to be fair to him, he did his job to create a winning side, but is that good for Trim?

“For us, and for other local sides, we’re trying to accommodate young players coming through the ranks. Your choice of mentality is, do you want to win, become a Bank Rovers and take all the best players from town out to Bellurgan or to Muirhevna Mor, or do you want to actually develop your community?

“My job is to help the young players become better. If I - and we, as a club - can become a success through that, that’s fantastic. We’ll be there or thereabouts.”

Gollogley added: “Bellurgan have lights coming now in April and the club is making big strides forward. It’s good to be involved and great to be back, because if you can’t play the best thing to do is manage or coach.”