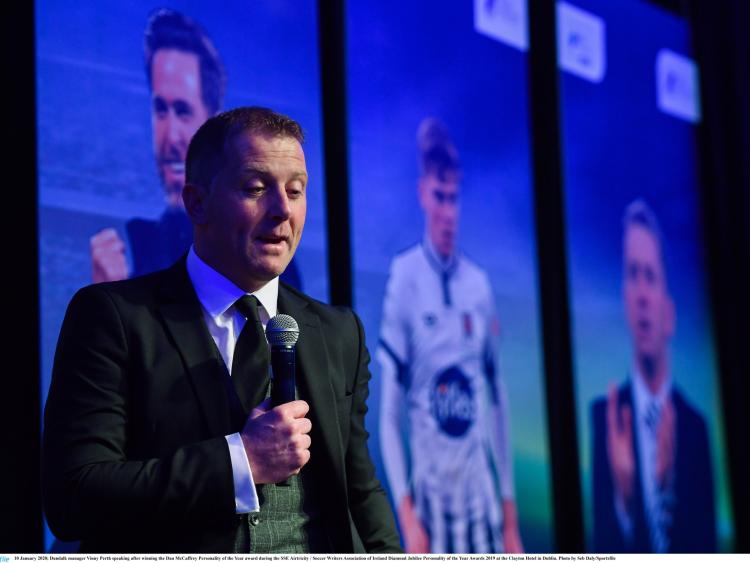 Vinny Perth has talked up the prospect of Dundalk FC fielding a second string in the League of Ireland.

Vinny Perth has talked up the prospect of Dundalk FC fielding a second string in the League of Ireland.

The Lilywhites manager has backed the inclusion of Shamrock Rovers II in the upcoming season’s First Division, despite the nine other members of the division forming an alliance to oppose their involvement.

On the possibility of the Premier Division champions entering a side in the lower grade, Perth views it as a way of accommodating more local players within the club set-up.

“One of the biggest criticisms of Dundalk is that we don’t develop young players,” Perth told RTÉ 2FM’s Game On.

“We’re a small town, with about 40,000 people living in Dundalk, so we struggle to bring local players through and it’s something that disappoints me.

“I would love nothing better than somebody from, for example, Blackrock starting up front for us and scoring a big goal.

“That would help us develop as a club. It will help that community base come in. But we’re so far off being able to bring players through because the gap is so big (between underage and first team).”

Perth also hit out at the clubs who continue to bicker over such changes.

“Clubs in the League of Ireland need to stop giving out about each other,” the Dubliner added.

“They need to get on with it and we need to understand each other more.

“We have an opportunity now. I think the window is open to improve our league and we need to understand why Rovers want to do it and what the benefits are.”