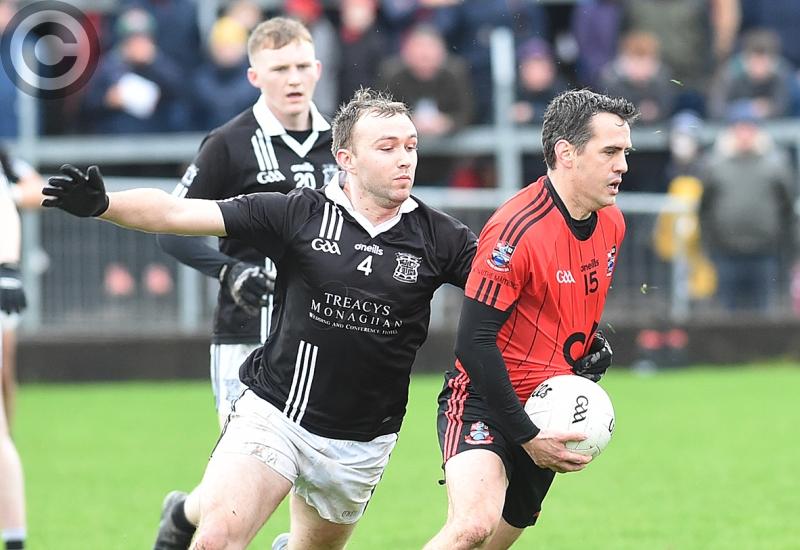 The record still stands: No Louth club has appeared in an All-Ireland club final, despite five provincial wins at intermediate and junior level since 2003.

Three minutes into the second half of Saturday’s Crossmaglen semi-final, Mattock Rangers were three points in front and feeling pleasured on the back of Niall McKeown’s fortunate goal.

But 17 of the game’s closing 18 points were scored by Magheracloone, including a devastating final quarter burst which saw the Monaghan outfit strike 15 unanswered, as the men in black prevailed overwhelmingly.

Was it a collapse, or were the Farney men simply too good? Probably a measure of both, while the strengthening gust, blowing towards the clubrooms end of Oliver Plunkett Park, favoured Mitchell’s in the second half, allowing them to land points from various ranges, angles and sources.

The scoreline is, ultimately, harsh, yet Rangers will acknowledge they failed to find their best consistently and bar a surging finish to the first half, played second fiddle. Defence has been their strongest element through both the county and provincial title-winning campaigns, but only McKeown emerged with the level of credit he had when entering and given Magheracloone’s offensive prowess, the variables didn’t bode well.

Strange as it may seem, the teams were well-matched for more than half of the affair, having gone to the interval level at 0-7 apiece. The veterans, Mattock’s David Reid and Tommy Freeman of Magheracloone, shared eight points and Niall Callan would have been pleased with the competitiveness of his outfit in a fast-paced encounter.

Especially on foot of a sluggish start, where they were thankful for Mike Englishby’s prevention of a certain goal. The reprieve allowed the Collon men to settle and when they did, get level at four points each before pushing ahead, with Aaron O’Brien and the Reids, Adrian and David, combining effectively.

The general consensus was, taking the breeze into account, that Mattock would remain in contention if they kept their ‘clean sheet’ intact. As it were, though, their odds of victory were slashed when the outstanding McKeown drove forward and saw his point attempt loop over David Kirk, nestling in the back of the net. At 1-7 to seven, the Wee County charges had a platform to push for Croke Park.

But Magheracloone’s response was emphathic and almost no sooner had they fallen three behind when the gap was reduced to two, after Gavin Doogan and Barry Kieran points.

David Reid pushed the lead out to a brace from a free a minute later, but that would be the end of Rangers breaching the halfway line, never mind registering.

Amid a shooting blitz, Doogan and Freeman were among eight to contribute to Magheracloone’s 15-point burst. With every notch, Mattock heads buried deeper, only the ground was unwilling to swallow them up. Instead, it was a case of enduring the agony right to the death.

So near, yet so far.