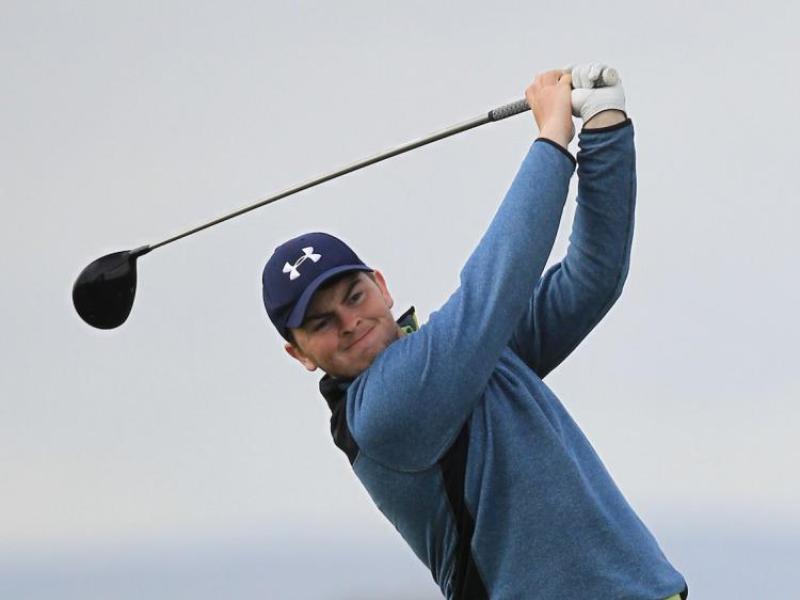 Caolan Rafferty is still focussed on amateur achievements as heads into 2020 and towards a major decision on his future direction.

Caolan Rafferty is still focussed on amateur achievements as heads into 2020 and towards a major decision on his future direction.

The 27-year-old Dundalk golfer is in the final year of his Business degree at Maynooth University and has always insisted that any thoughts of turning professional won’t be entertained until after he graduates.

But he admits that, even a few months out from his arrival at that significant crossroads, he is far from making his mind up on his future.

“I am genuinely still in limbo,” admitted Rafferty. “I don’t know whether to make the jump or go out into the big bad world and get a job.

“It’s something that I will sit down and have a chat about with my coach Dougie (Bell) and with Neil (Manchip). Neil will be a big help because he has been through situations like that with Shane (Lowry) and the boys and then obviously I’ll sit down with my family and see what they all make of it, too.”

At present, Rafferty’s golfing focus is very much on the amateur game where he still has a lot of unfinished business despite having won the South of Ireland and West of Ireland Championships over the past two years and appeared in the Walker Cup at Royal Liverpool last September.

“2020 is going to be another busy year. There are a couple of extra teams involved in this year so hopefully I will make a few of them and the end goal this year is the Eisenhower Trophy. I just missed out last time when it was on in Carton House.

“Looking back, 2019 is as good a year as I probably could have hoped for. I think if someone had said to me, at the start of the year, this is what you are going to achieve in 2019, I would have took everything off them and ran for the hills.

“From the start of the year in South Africa right through to playing Walker Cup there is very little that I would change.”

Having reached the semi-finals of the South African Amateur Championship, where he was beaten by one hole, Rafferty came home and captured the West of Ireland at Rosses Point.

“The win in the West was another big thing in the year. To win anything is big, but to win one of the big championships here in Ireland is obviously that little bit sweeter. I think to win it the way I did win it as well, by a few shots, was nice.”

Rafferty’s other big highlight of 2019 was his appearance at the Walker Cup where he picked up one win from two outings in the singles having been overlooked for the foursomes on both days along with fellow Irishman James Sugrue.

“The Walker Cup was unbelievable from the minute you get there to the end of it. Obviously, I would have liked to play another game, maybe play foursomes on one of the days, but that’s just the way things go. But, other than that, it was just a fantastic week and I got to meet a great bunch of lads.”

However, 2019 wasn’t without its disappointments with Ireland losing the Home Internationals in Lahinch and Dundalk again coming up short at the All-Ireland Barton Shield finals, while the loss of a five-shot lead in the final round of the R&A Scholars Tournament at St. Andrews in April is still a raw memory months later.

“St. Andrews was a disappointment, but I learnt an awful lot about myself and learnt a lot about how to deal with a disappointment like that there and how to cope a little bit better when you are five shots ahead. It seems like an awful lot, but it’s only one hole at the end of the day in golf.”

Members of the Irish squad recently met up with Open Champion Shane Lowry and Rafferty admitted that many of the insights that the Offaly man shared with them that day struck a chord with him.

“Meeting Shane was class. He is such a genuine lad. He kind of just put it all into perspective. He was open and very honest. He gets nervous, everyone gets nervous and he said there are days that he has learned an awful lot about himself. The things that I could draw out of it, I went through myself.

“He knows what he wants, and he does what he wants, when he wants. That’s an attitude that gets you a good bit in golf. It’s important to please yourself and forget about what everyone else is saying about you. There are always going to be the people saying you should be doing this or should be doing that. Shane mentioned that about people saying he should have done this, or he should have done that, or he should still be something else, but at the end of the day he's the one standing with a major and a lot of wins under his belt. You have to respect someone when they are so honest about it.”
Rafferty will be part of a group of Irish players who will once again start their season in South Africa and he admits that it has been of great benefit to him in each of the last two years.

“I always find that South Africa is really important to kick-start your season. You are going down there and playing some of the best courses in the world and because it is so early it gets you going earlier in the year. It shortens the winter and sharpens your tools and allows you to hit the ground running because you don’t want to be behind the mark at the start.

“You take a lot of confidence when you go down there and you compete against some of the best golfers in the world. You are playing golf courses that we don’t normally play and, if you do finish well, it just goes to prove that you have more in the bag than you would find if you were just at home playing links all the time.”

Rafferty will start 2020 as number one in the European Golf Association rankings and 15th in the World Amateur Golf Rankings, just one slot below his all-time high of 14th. Making the WAGR Top 10 is a major goal for the coming year, but his belief hasn’t wavered that if he can continue to play good golf, everything else will look after itself.