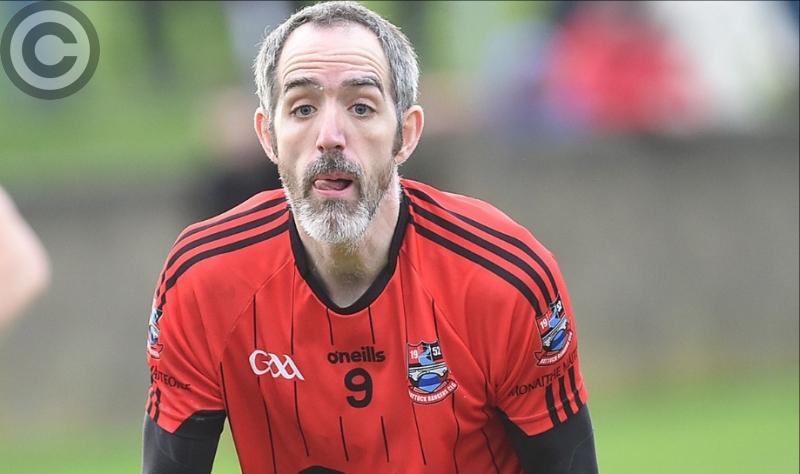 When he’s not dressed in the red-and-black Dan Bannon puts words together for different publications, including this one. (Pic: Arthur Kinahan)

They should be going handy on the turkey – and pints, and all else that might hamper fitness levels – over in Collon this Christmas. Coming up for the village’s football representatives, Mattock Rangers, early in the New Year is an All-Ireland semi-final, and if that’s not enough to encourage a hold being put on the grub and the drink, then ambition wouldn’t be burning too brightly.

No Louth team has ever appeared in an All-Ireland club final. Dundalk Gaels, Geraldines and Sean O’Mahony’s, in that order, made the semi-finals of the intermediate grade in which Mattock are competing, and last year Young Irelands, after winning out in the Leinster junior, came up against Kerry opposition, and were narrowly beaten.

Mattock were good in Louth, especially in the final, and since then have taken care of what the province had to offer. Monaghan opposition put paid to Geraldines’ All-Ireland ambitions six years ago – in early January, Farney opposition in the shape of Magheracloone Mitchel’s, who have obviously overcome that sinking feeling, will again try to spike Wee County hopes.

This county could do with a bit of a lift, and could there be anything better right now than to have its flag-carriers taking an All-Ireland title? Mattock could be the tide that lifts some, if not all, boats.

We in what’s called the Fourth Estate, which is a rather fancy, if enigmatic, way of describing the profession to which hacks – ie, writers – belong, will be looking out for Dan Bannon. When he’s not dressed in the red-and-black Dan puts words together for different publications, including this one; but, surely, there’s no-one going to ask him to cover what is arguably the biggest game Mattock have faced since coming into force in 1952.

More about the semi-final later.