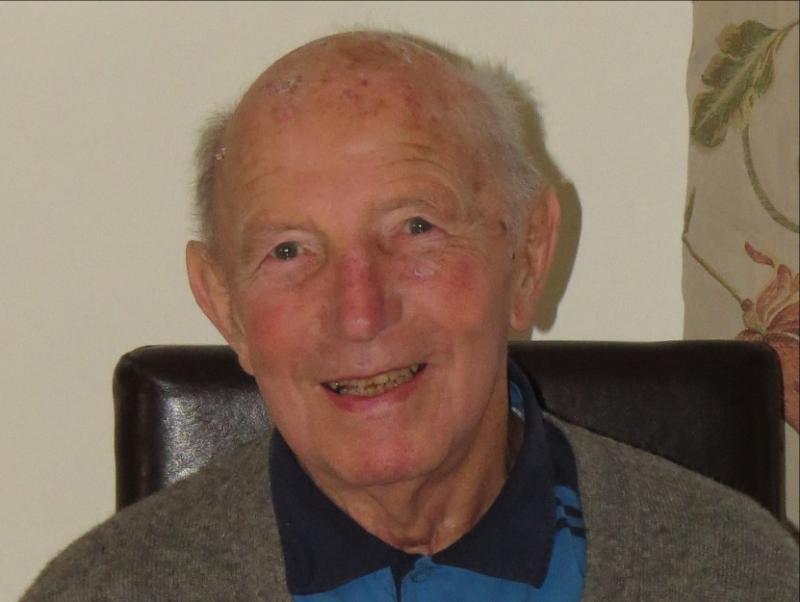 Pat Markey won his fourth county medal in 1955 and was captain when Mary’s retained the title.

It’s almost certain that had Pat Markey not taken a break from inter-county football at the beginning of 1957, giving precedence to his upcoming nuptials, he’d have been part of Louth’s All-Ireland-winning team.

But if he had any regrets about missing out on the big prize, Pat would have had none with his marriage to the former Miss Angela Donnelly, from Cadamstown, in County Offaly. It was blessed with four children and lasted for 56 years up until Angela’s death six years ago.

Pat’s career in the red jersey, which had taken off when he was just 17, in 1945, was honour-laden. It ran parallel with an equally successful stint with Ardee St. Mary’s, and to have crowned it with the greatest prize of all would have been no more than his talent deserved. He had previously gone desperately close to achieving this goal, playing on the team beaten by Mayo in the 1950 final.

Pat (91), whose death took place in Dublin last week, returned to county team duty in 1958, playing in his customary centre-half berth in the championship semi-final, 4-3 to 1-5 defeat of Offaly. Two of Louth’s goals that day at Croke Park fell to his long-time colleague, Kevin Beahan, with Alfie Monk claiming the others. This win, however, was not to prelude to the No.6’s fourth provincial medal.

The auld enemy, Dublin, were in opposition for the final, and in a game played at Navan, the sky-blues avenged the previous year’s defeat at the same stage, their 1-11 to 1-6 victory setting them up for All-Ireland success.

This was Pat Markey’s last match in an inter-county career that had begun 12 years earlier. He was still in his teenage years when he won the first of his five Louth senior championship medals, playing alongside Ray ‘Gua’ Mooney, in the 1946 decider. By the time he had lined out against Young Irelands he had already got his first taste of Leinster Championship football, playing at right-half-back against Meath and at wing-full in the defeat by Laois.

He took over at centre-half the following year, and then in 1948 played a pivotal role in Louth’s provincial championship success and St. Mary’s regaining the county title.

Louth beat Wexford in the Leinster final before going down to Cavan in the All-Ireland series.

That Breffni defeat, however, would be reversed a few months later in the quarter-final of the National League. This was a game for which St. Mary’s provided all six outfield defenders. Jack Bell, Johnny Malone and Nicky Roe were in the full-back line, and in front of them had a half-back unit, often spoken about as the finest ever fielded by Louth. Seán Boyle and Paddy McArdle were on the wings, flanking who else but Markey.

St. Mary’s influence didn’t end at that. On the Cavan team was Paddy Smith, Kevin Beahan’s brother-in-law, who had won All-Ireland medals in 1947 and again the following year. Working as a bankman in Ardee, Paddy had thrown in his lot with Mary’s, and given all he had achieved could have been expected to ‘walk’ into his favoured centre-half position. But this was P Markey’s jersey, which meant Paddy had to be accommodated elsewhere. (He was on the forty for the 1948 Louth final.)

Louth were beaten by Mayo in the 1949 league final, and again 17 months later, this time on an even bigger stage. The 1950 All-Ireland final is one that looms large in the Louth story. With his Mary’s colleague, Nicky Roe, having played himself to a standstill, scoring all but one point of his side’s 1-6 total, Louth succumbed to a late Mick Flanagan goal, losing by two points.

Pat Markey’s third provincial medal came three years later, Louth beating Westmeath, Wicklow and Meath on the way to a meeting with Wexford in the final. To illustrate the rivalry there was between Louth and Meath at the time, over 38,000 were there for the semi-final, while the final attracted 10,000 fewer.

Kerry were All-Ireland semi-final opponents, and here’s another game that’s often recalled. It was the day Fr Kevin Connolly, playing under the assumed name of Kevin McArdle, came in as a sub just before half-time, at which stage Kerry led by 3-1 to 0-3. The transformation in the game’s trend was significant in the second half, Louth getting back to within a couple of points. But Kerry regrouped and in the end were 3-6 to 0-10 in front.

Pat Markey won his fourth county medal in 1955 and was captain when Mary’s retained the title. His bid for the hat-trick was foiled, however. With the county in the grip of All-Ireland fever, little fancied Oliver Plunkett’s proved too good for the favourites, the final taking place just a week after the county’s semi-final defeat of Tyrone.

An All-Ireland win would have crowned Pat Markey’s career, but it was nevertheless one laced with quality and no little success. He was one of the county’s finest centre-half backs, a stylist to his fingertips.

In addition to county and provincial championship wins, he figured on many league-winning Mary’s sides, and was honoured by the Combined University team’s selectors during his time studying at UCD.