A parish as one: Louth's Mattock Rangers are Leinster intermediate champions 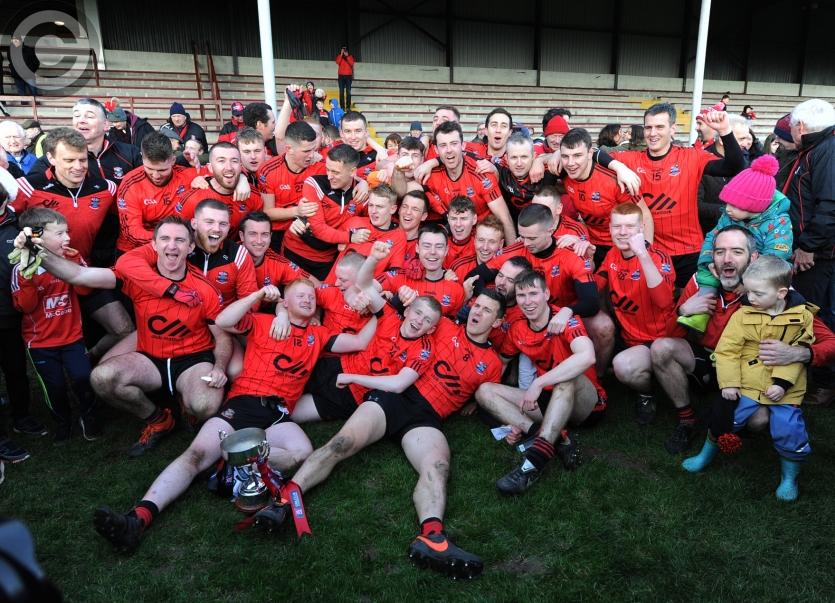 Niall Callan laughed when it was suggested that Mattock Rangers’ Leinster IFC win has earned him another season as manager. Aside from the formality of his re-appointment, this year is now set to run into the next, with an All-Ireland semi-final against Monaghan’s Magheracloone in early January drowning the foundations of his reign in freshly-cast concrete.

Tongue-in-cheek, really, when you factor in the seriousness of Rangers’ first provincial success, 17 years since they fell short in Navan as Dunshaughlin deprived the Collon charges of a Leinster senior crown.

“Maybe it’s a bit of redemption for 2002,” said Ryan Leneghan, a then-teenager, who watched that occasion from the stand. In the period since the flame-haired pulse of Mattock’s half-forward line has been involved on the many good days, particularly the Joe Ward triumphs of 2009 and 12 months later, while having to stomach relegation and the associated near misses. 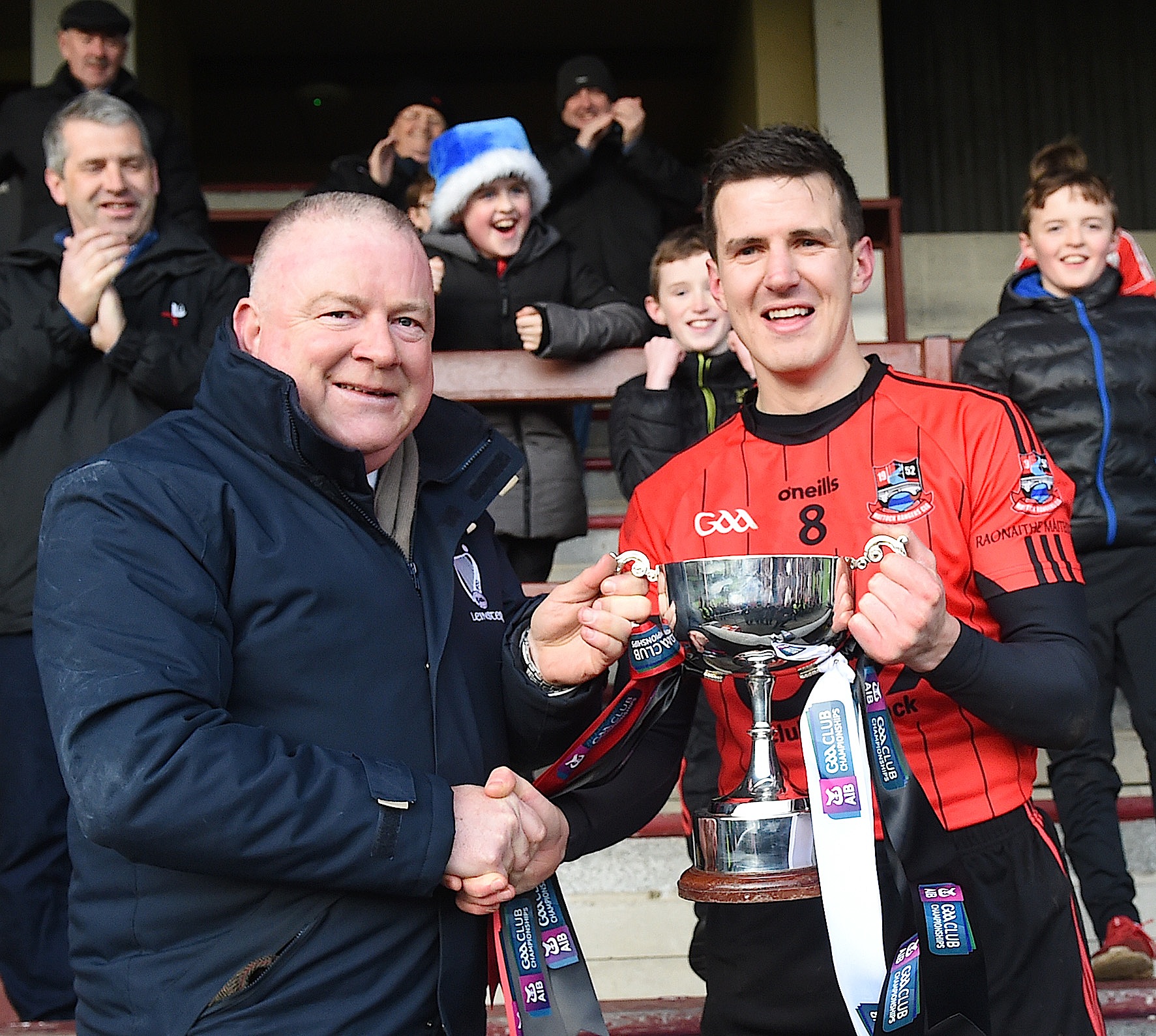 All the past pain and anguish dissipated into the realm of the forgotten, however, upon confirmation of Saturday’s victory.

“Words can’t describe it. It’s brilliant for the club, for the community of Collon, for the county. It’s fantastic, we’re over the moon,” Leneghan added.

His captain, Adrian Reid, typified leadership during a first half in which Mullinavat hinted at producing a shock, before building on Leneghan’s touching assertion during his acceptance speech, referring to how there is little else for people to do in their native village, along the Meath border, bar pursue membership of Mattock.

Scanning momentarily towards the inward tide of those sporting red and black, substance to Reid’s claim was in abundance. There mustn’t have been a soul left in Collon. 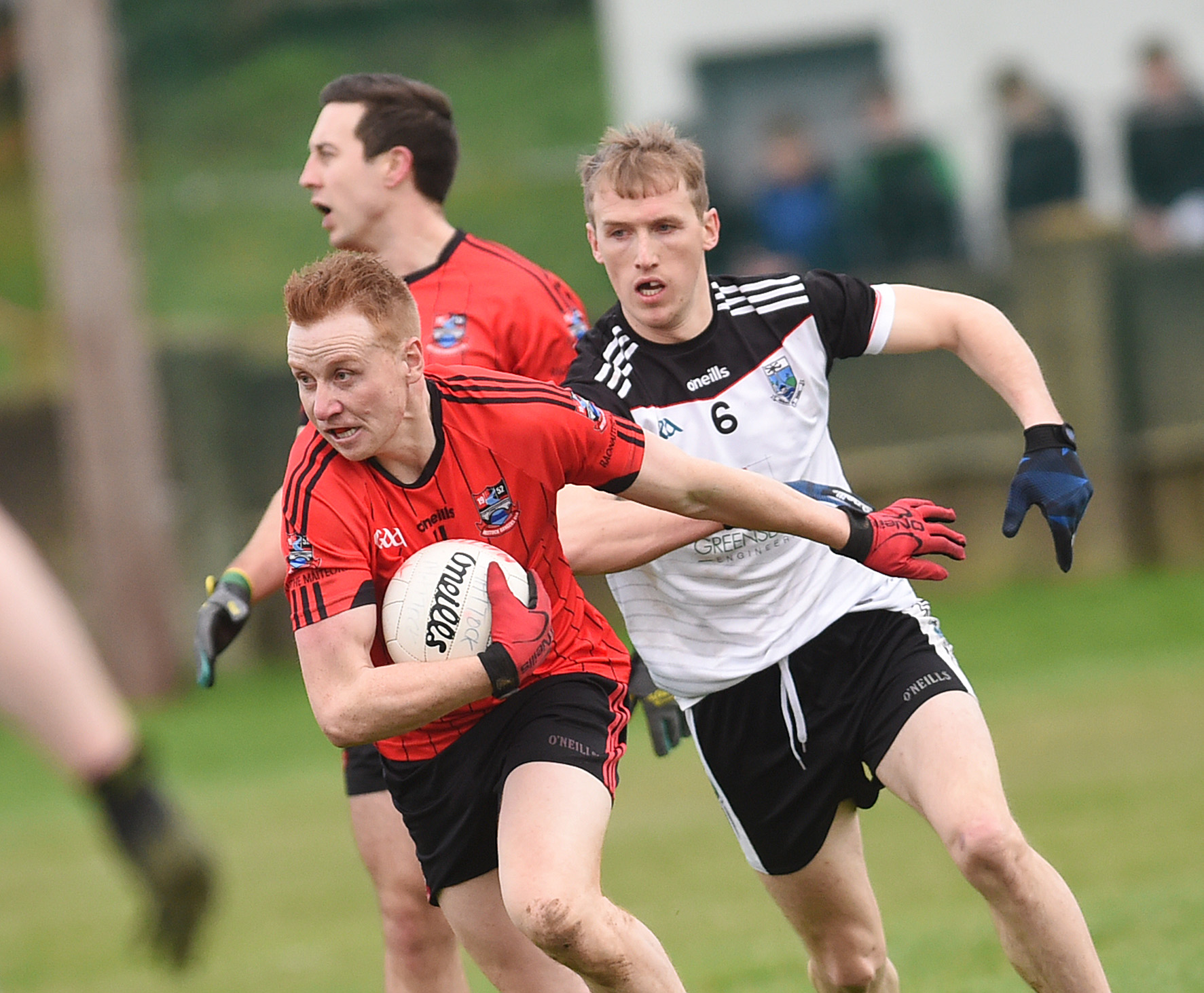 FAR FROM RED AND BLACK

Callan’s assuming of the reins followed respective spells in charge of St. Fechin’s and Roche Emmets, in which time Mattock were wallowing in the pits of intermediate football, unable to escape its clutches despite repeated favouritism.

Ultimately, winning four senior titles as a player counts for little when you’re attempting to make a go of pacing the other side of the white line. Hence, there had to be doubts when it came to deciding whether to take over a team containing several former team-mates.

As they say, though, what’s for you won’t pass you, even if there have been tough moments in an otherwise extraordinarily successful season.

“I’d to make a couple of big calls with lads I’ve played with and that’s hard when you’ve soldiered with them for years… but you can’t beat winning with your own club. 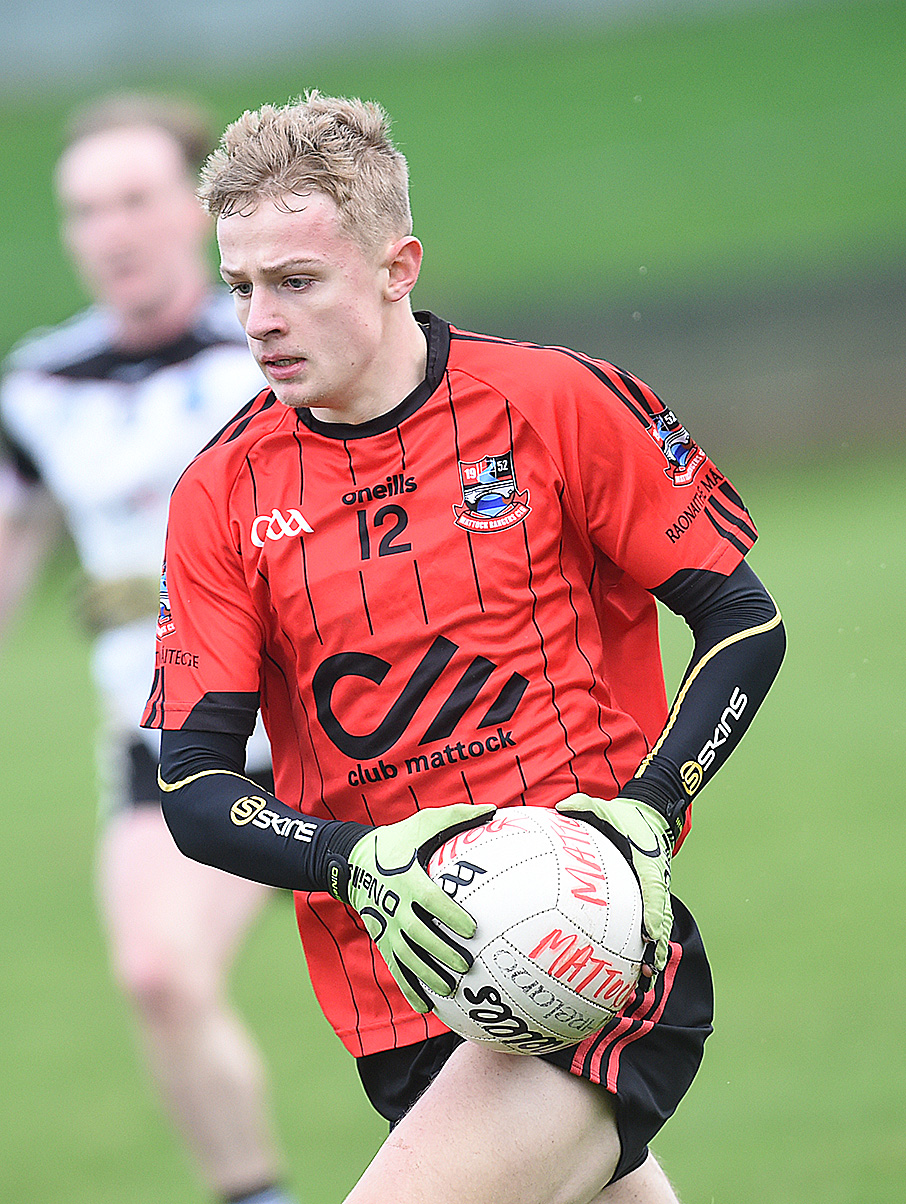 “There was great work done with the group in the last number of years, but they were just lacking something or not playing as Mattock should play, I felt, and I said that I’d try to bring that to the table: to give them that little bit of freedom to express themselves, because they’re intelligent footballers, intelligent lads.”

Thus, Mattock’s early performance must have had Callan boiling in frustration, even if he retained his typically unflustered demeanour as others flirted with losing the plot. Mullinavat dominated the opening 20 minutes or so to lead 0-7 to a brace.

And as they drove forward they became increasingly more incisive, albeit failing to get a goal attempt on Mike Englishby. It says much for the Kilkenny outfit’s dominance that corner-backs Shane Maguire and Alan Caraher were Rangers’ outstanding pair amid the barrage.

Something had to change. And it did. But what?

“We started to get under the breaking ball and put a lot of pressure on their kick-outs,” Leneghan said, “and we started using the ball better and taking our scores.”

His manager took a different stance, though, pointing towards the skipper’s influence.

“The last 10 minutes in the first half, Adrian got two points from play,” Callan reflected. “He took control and the game by the scruff, and it settled us down.

“We knew that if we were within one or two points, with that little bit of breeze, we’d be there or thereabouts. A breeze never wins a game, but it worked to our advantage and once we kept the goal out I think we’d a huge chance.” 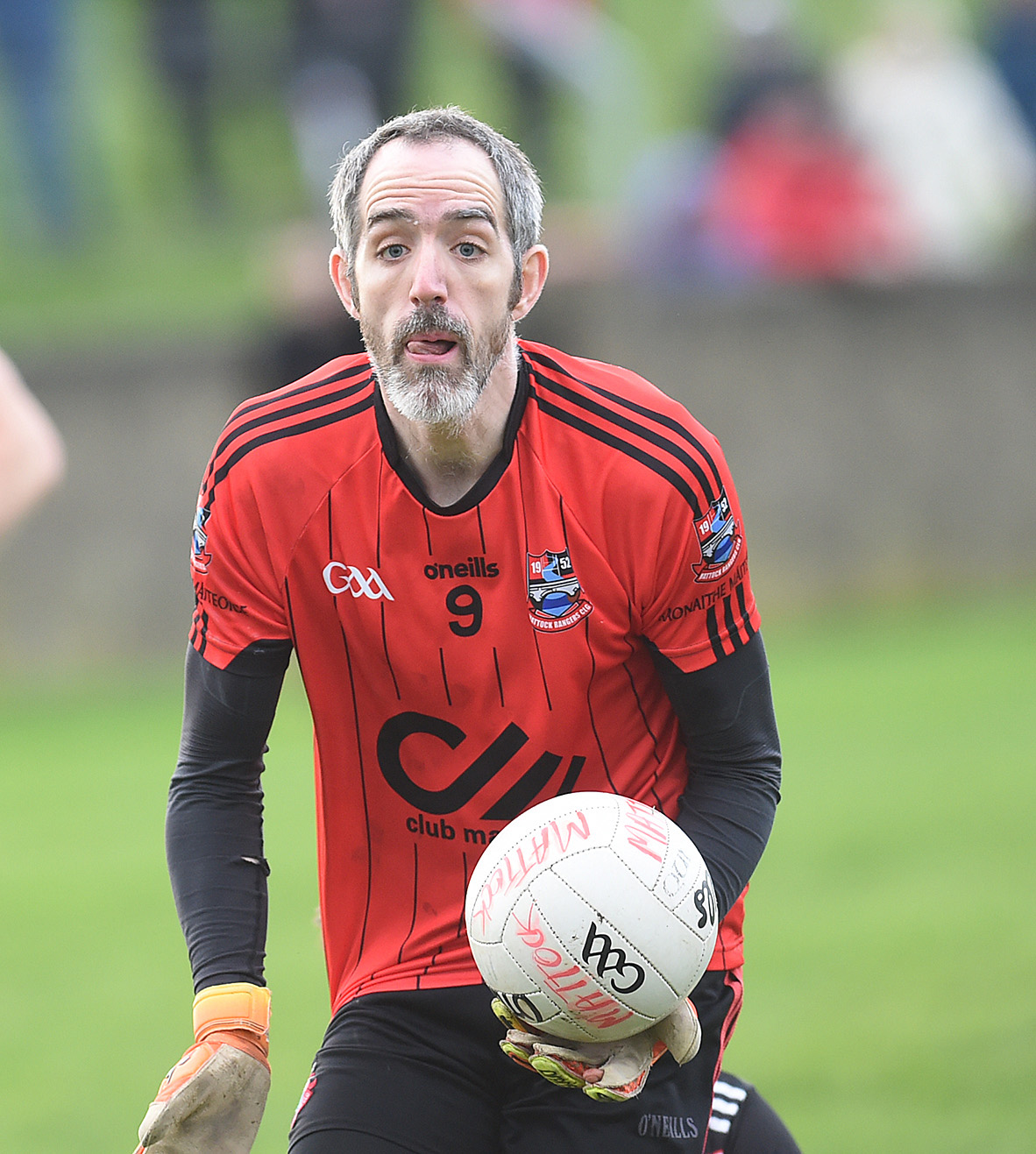 One down at the break, 0-8 to 0-7, Mattock were two in arrears three minutes into the second half when Brian Corcoran rammed a needle full of energy into the Rangers veins. Brendan Leacy was involved in a move which crescendoed with Leneghan side-footing the ball off the crossbar, only for Daniel Bannon to recover possession and pass across for Corcoran to flick to the net.

The gap, ultimately, finished at six. A fitting number, perhaps? David Reid now has a half-dozen adult championship medals, while this is a second provincial victory for Mattock’s number six, Niall McKeown, who previously won an Ulster junior title with Rockcorry, the club of his origin, in Monaghan.