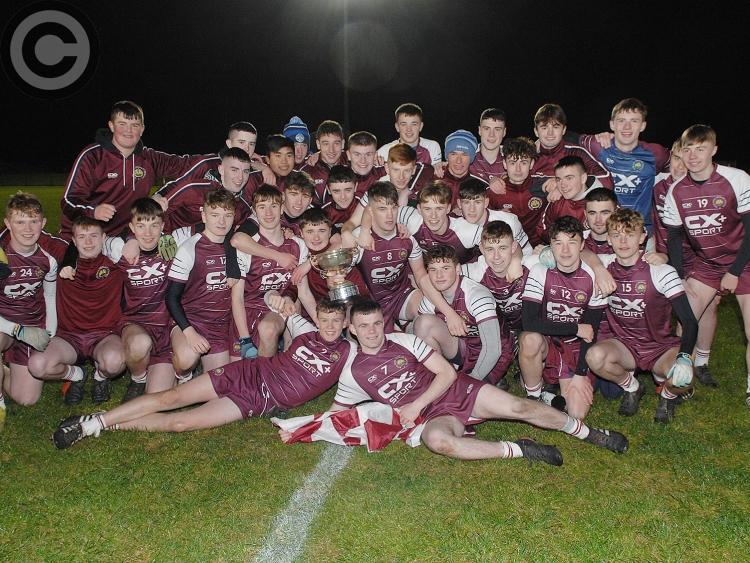 Bush Post Primary etched their name on the Lennon Cup for the first time in the school’s history after grinding out victory over St. Mary’s Drogheda in Darver on Thursday night. (Pic: Arthur Kinahan)

Bush Post Primary etched their name on the Lennon Cup for the first time in the school’s history after grinding out victory over St. Mary’s Drogheda in Darver on Thursday night.

Cian Connor guided the peninsula men across the line, with seven points. However, the final will be mostly remembered for a triple sending off by referee David J McArdle.

Congratulations to @BushPostPrimary who won the Lennon Cup for the first time this evening. Team Captain Gerard White is pictured receiving the Cup from @louthgaa Games Manager Shane Lennon after this evening’s Final in Darver @louthgaa @DkITGAA pic.twitter.com/JBBYXVy98L

The score was 0-6 to two at that stage and Bush, with the gaping numerical advantage, powered on to a finish with a Patrick Johnson flourish. Johnson was impressive all evening and was rewarded for his endeavour with three points when the game opened up.

St. Mary’s dominated the nervy opening exchanges, but didn’t register a single score. Three first half points from Connor had the first time winners in the driving seat.

Mattock Rangers’ Oisín McKenna landed the Drogheda side’s only point from play in the 25th minute before McWeeney reduced the deficit to the minimum with a free, making it 0-3 to 0-2 at half-time.

Upon the resumption, Connor’s accuracy, with two scores either side of a beautiful Enda O’Neill point, extended the lead, while St. Mary’s couldn’t find the range before eventually losing their heads.