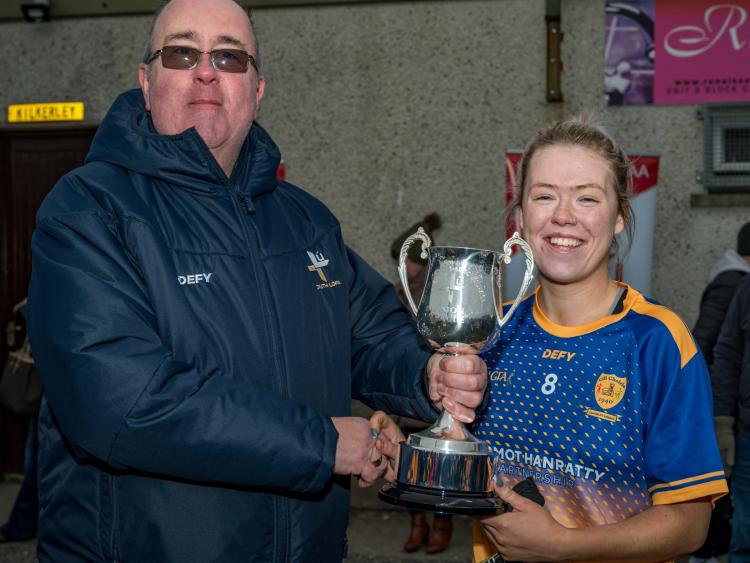 The basis for the victory was laid in the opening half, at the end of which they led 2-12 to no-score.

“It’s a fantastic feeling to win with this bunch of girls,” said Louth and Kilkerley star Sinead Woods after the triumph.

“There was a lot of chopping and changing of games throughout the year so it was hard to get a good run at it, but I think we peaked at the right time.

“The cold, dark nights slogging it out on the back field finally paid off. The last two games we really showed what we can do.

“The younger girls from the U16 team really drove us on and are a credit to the club.

“We have great support from all in Kilkerley so it’s brilliant to have days like this.”

Emmets were quickly out of the blocks as captain Jade McKeown and Ciara Sharkey pointed before Claire Clifford beat a couple of defenders to flick a high centre from Rachel McNally to the net on five minutes.

They almost had a second moments later as a blistering run and shot by Woods was superbly touched over the top by Cooley netminder Sinead Rice.

As Kilkerley continued to dominate they added further points from Woods, Clifford and Ciara Lennon in between a second goal from Sharkey from close range to lead 2-6 to 0-0 after only 14 minutes.

Shortly after they almost had a third goal as Sharkey’s shot went over after striking the crossbar.

“We definitely were on fire in the first half and had a strong hold of the game by half-time,” Woods added.

“They did give us a good rattle in the second half, but we dug deep and thank God we had the damage done before that.”

With Woods and McKeown dominating the midfield exchanges the forwards saw plenty of the ball and after the centre-fielders combined to put Claire Clifford through, the youngest of the famed Lennon clan saw her shot go narrowly wide.

There was little respite for Cooley, however, as Woods (2), Clifford and Lennon were all on target, leaving the home side with a big lead at the break.

Kickhams were much improved on the resumption and after creating a couple of chances Megan Ferguson had their first score from a free. They got the reward their play deserved when Ferguson’s shot was adjudged to have crossed the line despite the brave efforts of Eimear McEnteggart in the home goals to keep it out.

Cooley supporters found their voice as Ferguson and Katelyn Quinn sent over and Rita O’Brien was unlucky to see her shot kept out by the post, but any hopes of an unlikely comeback where dashed in the 45th minute as Lennon’s brilliant shot came back off the post into the hands of Aoife McGeough who lashed it into the net in what was the winners’ only score in the second half.

Cooley, to their credit, never gave up and were rewarded with a second goal, via Hannah Kirwan. Indeed, they could have been closer as Kilkerley ’keeper McEnteggart did well to keep out goalbound shots from Kirwan and Ciara Quinn.