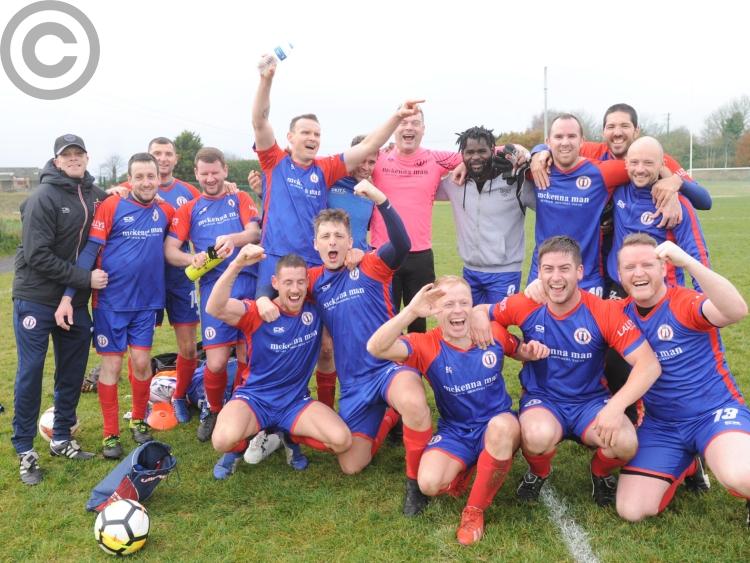 The 2-0 win in Ardee, which earns the Rock Road club a place in the NEFL’s top-flight for the first time, was inspired by Alfonso Crespo’s first half brace, as Damien Bellew’s side capped a fabulous campaign - their debut in Division One - with a third successive promotion.

Fresh from morale-sapping losses to OMP United and Carrick Rovers in consecutive games, which forced Bay into a last-chance saloon against a recently resurgent Square, Crespo’s fifth minute finish served as a settler, before he bravely delivered the death-imposing dagger on United with the final play of the opening period.

“We were on a bit of a bad run, the worst run we’ve had all season,” Bay manager Damien Bellew conceded after the match.

“But it was a cup final today and it was great to see the lads picking it up and putting in such a great shift. On the 90 minutes we deserved (to win).”

The victors, as you would anticipate, had all the best performers, with Paddy Connor and Anto McLaughlin especially dominating midfield in giving their team’s attacking quartet a platform to operate off.

Shaun O’Connor and Alan McCartney were instrumental as Bay completely dominated the opening 20 minutes with Square unable to gain any sort of a foothold. And when they did begin to create openings, Mullen was in outstanding form between the winners’ posts.

Indeed, if the Deesiders felt as though it wasn’t going to be their day after Crespo’s double-completing header in the 45th minute, they were certainly cursing their predicament in the aftermath of a string of fine saves from Bay’s ’keeper in the second half; the most outstanding of which saw him claw away Andrew Egan’s goalbound nod.

“At the times they (the goals) came, it probably just deflated Square. The second half, we didn’t have to push forward, we could just consolidate,” said Mullen, who added; “You always have to be confident with the players we have at our disposal.

“They beat us 4-0 in the Cup. I think they’d a few lads suspended today, the same as ourselves, but the lads they were missing were probably a little bit more vital for them.

“Ross Gaynor was suspended and the day they played us in Muirhevnamor, he pulled all of the strings and caused all the damage.

“That’s the way it goes, we both had to deal with suspensions and injuries.”

The promotion caps a meteoric rise for the Dundalk side, who only entered the NEFL in 2015, with Bellew at the helm.

“It’s gone a lot better than expected. We entered in 2015 with the momentum of a good Summer League, where we finished second to Quay, behind us. We were brilliant in Division Four and it’s kind of snowballed from there.

“It’s easier to attract good players to the club when you’re winning and progressing well. We’re only new to the MDL and there are clubs who are likely better equipped than us, we’ve probably, nearly come up too quickly, in that we’re not prepared for a lot of what we’re going to be faced with.

“But the players keep coming back and putting it in every game.

“The aim for the season, we said, was to consolidate for a season in Division One and build from there, but we’ve carried on.

“The likes of Quay, we have benefitted from getting a few of their players when they folded. Junior football overall is kind of suffering, not just in Louth, but Meath as well, you can see teams folding left, right and centre. In the last couple of years some big clubs have gone.

“But we’re just delighted to be up there and we’ll enjoy the off season, before getting busy recruiting.”

SEE TUESDAY'S DUNDALK DEMOCRAT FOR FULL PICTURE COVERAGE, ALONG WITH REPORT AND REACTION