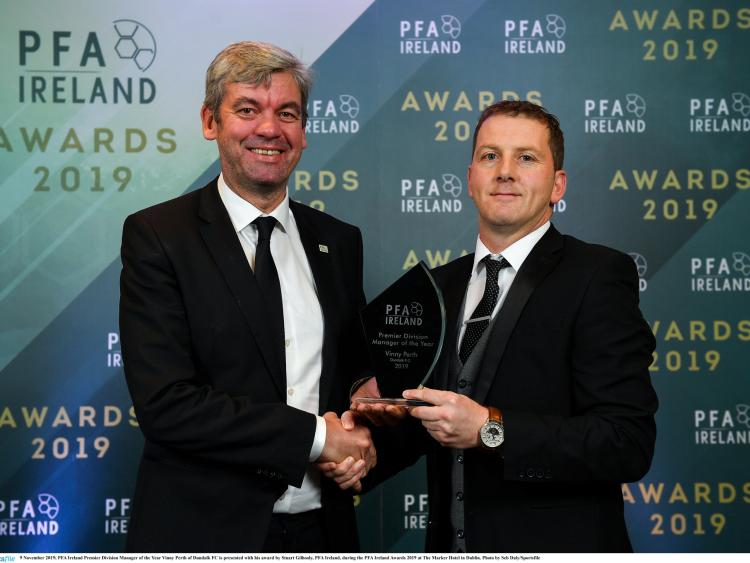 Dundalk FC head coach Vinny Perth was last night named PFAI Manager of the Year at the annual awards ceremony which took place at The Marker Hotel in Dublin.

After succeeding Stephen Kenny in the Oriel Park hot-seat, Perth has enjoyed a remarkable maiden campaign in charge of the club which has yielded the SSE Airtricity League title and EA Sports Cup.

Perhaps the most impressive aspect of Dundalk’s season was turning a 13-point deficit in April into an 11-point advantage at the top of the table by October, as The Lilywhites lifted the League of Ireland trophy for the fifth time in six years.

Perth deservedly fended off competition from Stephen Bradley and Keith Long – respective managers of Shamrock Rovers and Bohemians – to collect the award his predecessor Kenny won on five occasions.

However, there was to be major disappointment for Dundalk duo and PFAI Player of the Year nominees Sean Gannon and Michael Duffy after they lost out to Shamrock Rovers and Republic of Ireland international Jack Byrne, who took home with him the biggest prize of the night.

Richie Towell and Daryl Horgan – winners of the award in 2015 and 2016 respectively – along with last year’s winner Duffy remain the only three Dundalk players ever to have picked up the accolade.

Gannon and Duffy though, along with fellow Dundalk teammates Sean Hoare, Chris Shields and Patrick Hoban were honoured on the night as part of the PFAI Premier Division Team of the Year.