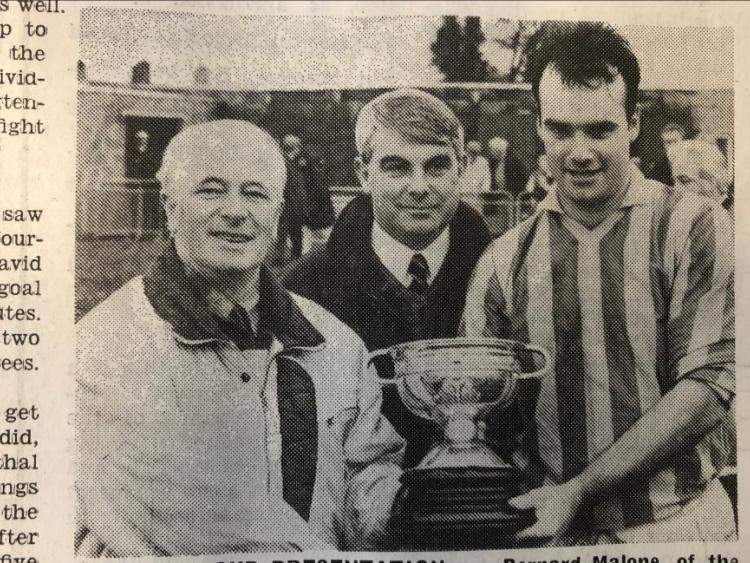 The Democrat archives are a dangerous place, often difficult to pull oneself away from. It’s an amazing sanctuary for the sort who reminisce. Being a Roche Emmets clubman, looking back has often been more pleasant than turning forward, even if the Faughart Parish’s pride has been restored through the recent junior championship victory.

But, leaving local loyalty aside, 25 years ago the Louth club scene was much different. In saying that, so was the fortune of the county team. In an edition published on November 5, 1994, there was a report on Louth’s 1-8 to 1-4 National League win over Mayo the previous Sunday, Stefan White scoring six points in Castlebar, with Colin Kelly bagging the goal.

Louth sat second in the Division Two table, joint-top with Clare, and loitering over Armagh, Galway, Leitrim, Tyrone, Cork and Mayo. A list comprising of largely heavy hitters. Not bad.

In the same paper, there was a preview of upcoming league matches, particularly the Cardinal O’Donnell Cup final meeting of Clan na Gael and Dundalk Gaels, Gaels having tasted their first senior success in 42 years - the ACC Cup - the week beforehand.

“The team captained by Davy McDonnell - whose father, Tony, was at centre-forward 42 years ago - beat Naomh Máirtín… and if the celebrations which followed were a little over the top, well, let’s say they weren’t without justification,” was how The Democrat reported Gaels’ victory.

In previewing the O’Donnell Cup decider, which was to take place at St. Brigid’s Park the following day, November 6, it was written: “It’s a repeat of the county final of two years ago, which, it will be recalled, went to two matches. Gaels were denied victory in the opening contest by a late Seamus O’Hanlon point - but in the replay, there was really only one team in it, at least in the second half.

“Cathal O’Hanlon got a goal on either side of half-time, and they were the scores which effectively ended the game as a contest.

“Clans went on to collect the O’Donnell Cup and ACC Cup that year, making them the first treble-winners since Newtown Blues, in 1988.

“Clans repeated the feat last year, and at the beginning of this season made no secret of the fact that they wanted to become the first side to complete a treble treble, as it were.”

The year got off to a bad start when they failed to progress from the group phase of the ACC Cup and later, St. Joseph’s knocked them out at the semi-final stage of the championship.

However, the campaign would end with silverware, as Clans won a third successive league. Substitute, Leo Connolly’s goal proving decisive in a tie which ended 3-7 to 1-11 in the Castletown side’s favour.

“Gaels can rub thumbs with Roche Emmets - and they can lick their wounds as well. As happened in the relegation match, Sunday’s Malone Insurances Division One final at St. Brigid’s Park was decided by a last-minute goal,” opened The Democrat’s report to the O’Donnell Cup final which took place on the day before the relegation decider.

A summary of what went on at Páirc Clan na Gael: “You don’t expect a relegation match to have spills, thrills and much less, good football…

“It was as if they had said, let’s decide this with football. Let’s each play with abandon, and may the best team win. It was a credit to them - and, yes, it was a pity there had to be a loser.

“No-one would mind being asked to go back another day, and, in truth, another chance is what Roche Emmets deserved. They led fort almost the entire first half, and after being passed in the third quarter, thundered back to grab a two-point lead.

“Roche’s final score came in the 60th minute - but there was injury time to be played, and it was during this that Joe’s grabbed a sensational winner. Ollie McDonnell was the creator, Alan O’Connor the scorer (2-10 to 0-15). Jimmy Sweeney called it all off seconds later; Joe’s were jubilant, Roche devastated.”

And understandably so, as it signalled an end to the senior status they had held since 1957. Joe’s, meanwhile, kicked on, winning a maiden Joe Ward crown two years later.

Also on the weekend of the drama in Louth, Barney Rock’s senior champions, Stabannon Parnells, faced Laois’ St. Joseph’s away in the Leinster Championship, losing 1-11 to 1-9.

A quarter-of-a-century on, Joe’s and Gaels are the only ones of the five to  still hold senior championship status, even if they are in Division Two, alongside Roche and Clans  for 2020. Parnells are junior and have been for over a decade.

Live it all back, in The Democrat archives...