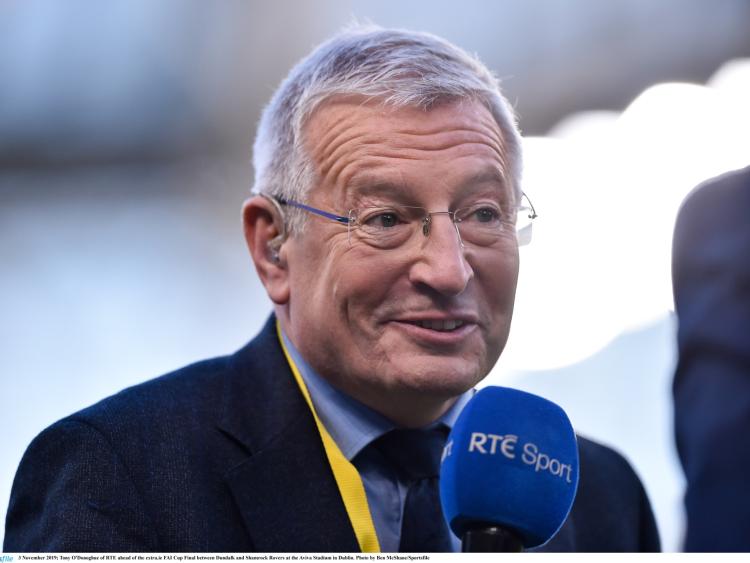 With half an hour gone, ‘Touchline Tony’ O’Donoghue got in on the action when he had a chat with Dundalk coach John Gill. (Pic: Sportsfile)

After the final, final whistle blew and Dundalk’s players sank to their knees, George Hamilton wasn’t backward in coming forward as the camera panned to a former Lilywhite: “Ronan Finn, as captain of Shamrock Rovers, has killed Dundalk’s dream”.

Yes, the treble was history, but not in the way we all would have hoped for, but at least the RTÉ commentator was on our side on Sunday - for the most part.

Unlike ABD Pat Fenlon (that’s Anybody But Dundalk, BTW). 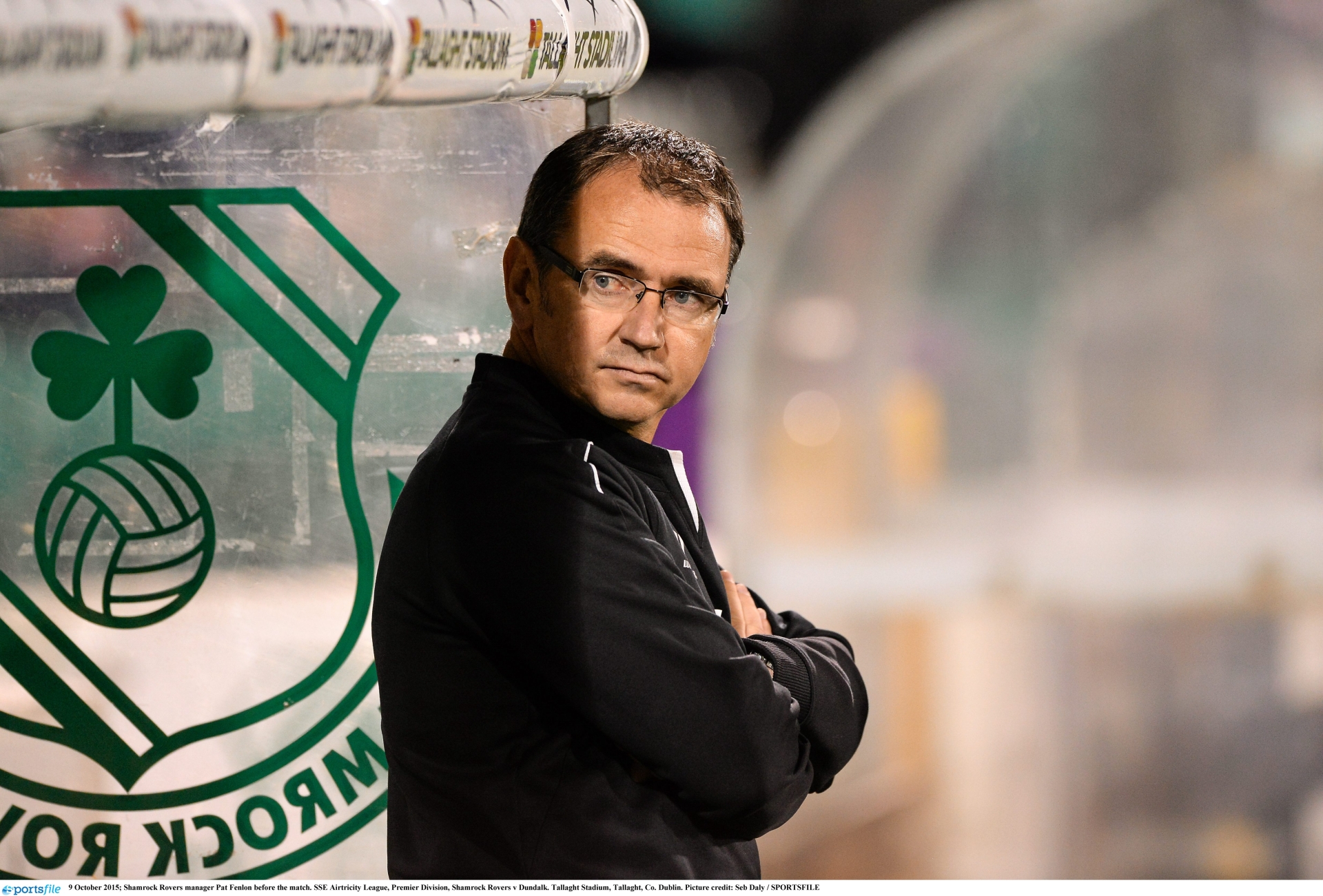 “It’s a strong Rovers midfield”, he opened with, just before kick-off at the Aviva. “The strongest Rovers team. They’ve everyone available.” Perhaps that was a sly early dig at our own absent midfield dynamo?

But it was true.

A white horse had led the Rovers fans across the city towards the Aviva before the match, and you felt that had Chris Shields been available, he’d have easily chased said same horse back to Tallaght without breaking a sweat.

Last year, Pat was (probably) dressed in a Cork City jersey up in the commentary box, and this time you couldn’t help but feel he was covered in hoops.

Then, just as both teams assembled for their team huddles, moments before kick-off, Pat praised a Dundalk player. “Hoban is a leader” and then he went even further: “Dundalk have plenty of leaders”. Jesus, thanks Pat.

Meanwhile, George was saying that Gary Rogers was a Drog. Well not really, but he did say that it was the Lilywhite legend’s seventh FAI Cup final, with one of those as a sub for Drogheda many moons ago. He’s pure Dundalk, George. Never forget that. 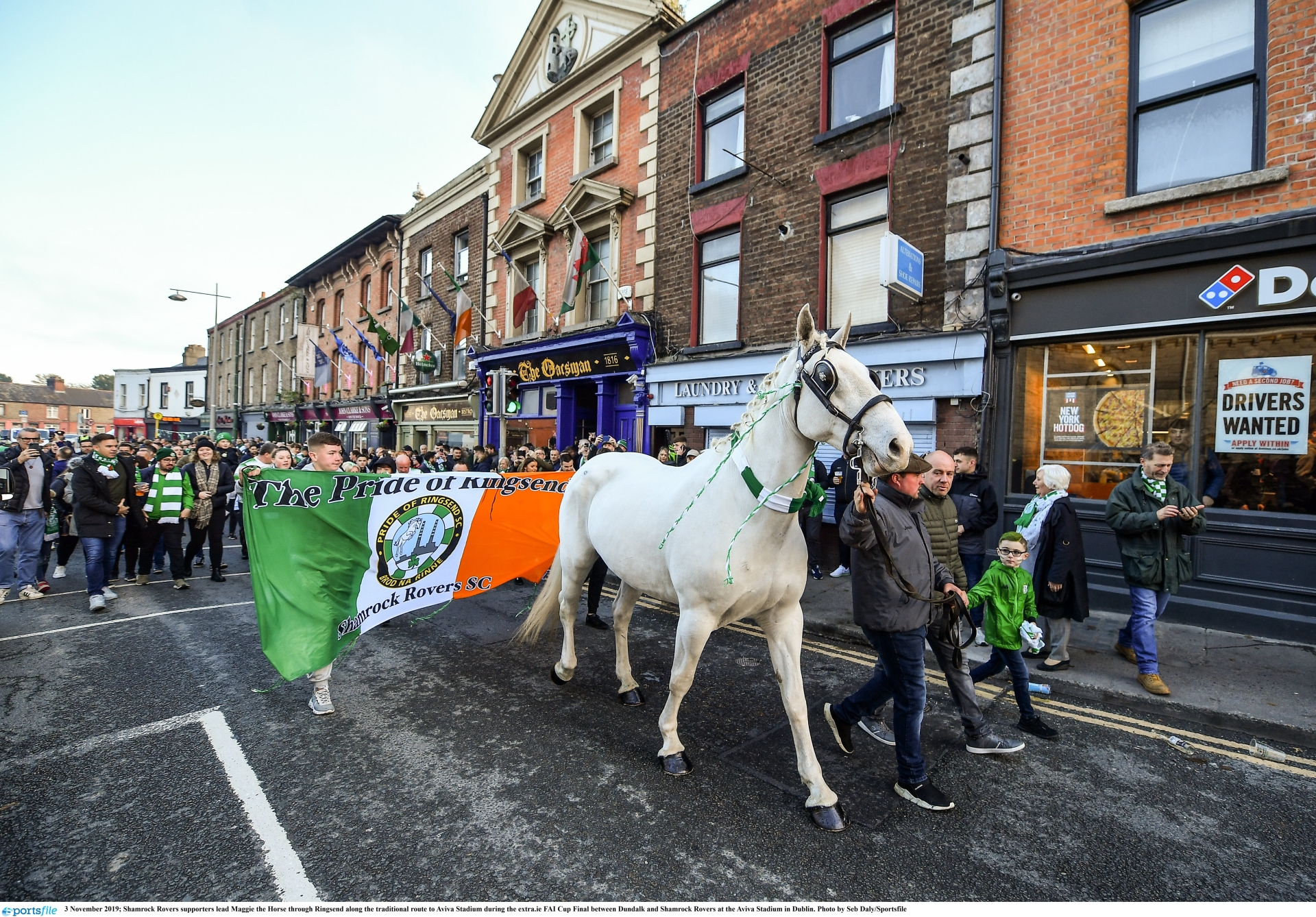 Then the fog of war descended, or at least the fog of the lit flares, which obscured viewing for the opening moments. Once the smoke cleared, George was hoping for a “football match to break out”. And one duly did.

Rovers were looking up for it and Jack Byrne was beginning to run the show, supplying Aaron Greene with plenty of ammunition going forward.

With the Hoops pinning The Town back, Rogers was the busier of the keepers, but Fenlon had faith in our stopper: “That one stung the palms of Rogers, but it was straight down his throat, easy enough” - says you Pat.

With half an hour gone, ‘Touchline Tony’ O’Donoghue got in on the action when he had a chat with Dundalk coach John Gill.

“We need to get someone to get hold of it in midfield,” said Gill. Not mentioning anyone in particular.

Back up in the commentary box, as the camera flashed to Rovers boss Stephen Bradley, George mentioned the ‘Rovers Redemption’ factor: Bradley had been sent off for receiving two yellow cards as a player back in the 2010 FAI Cup final, so he’s obviously out to make amends. Obviously. 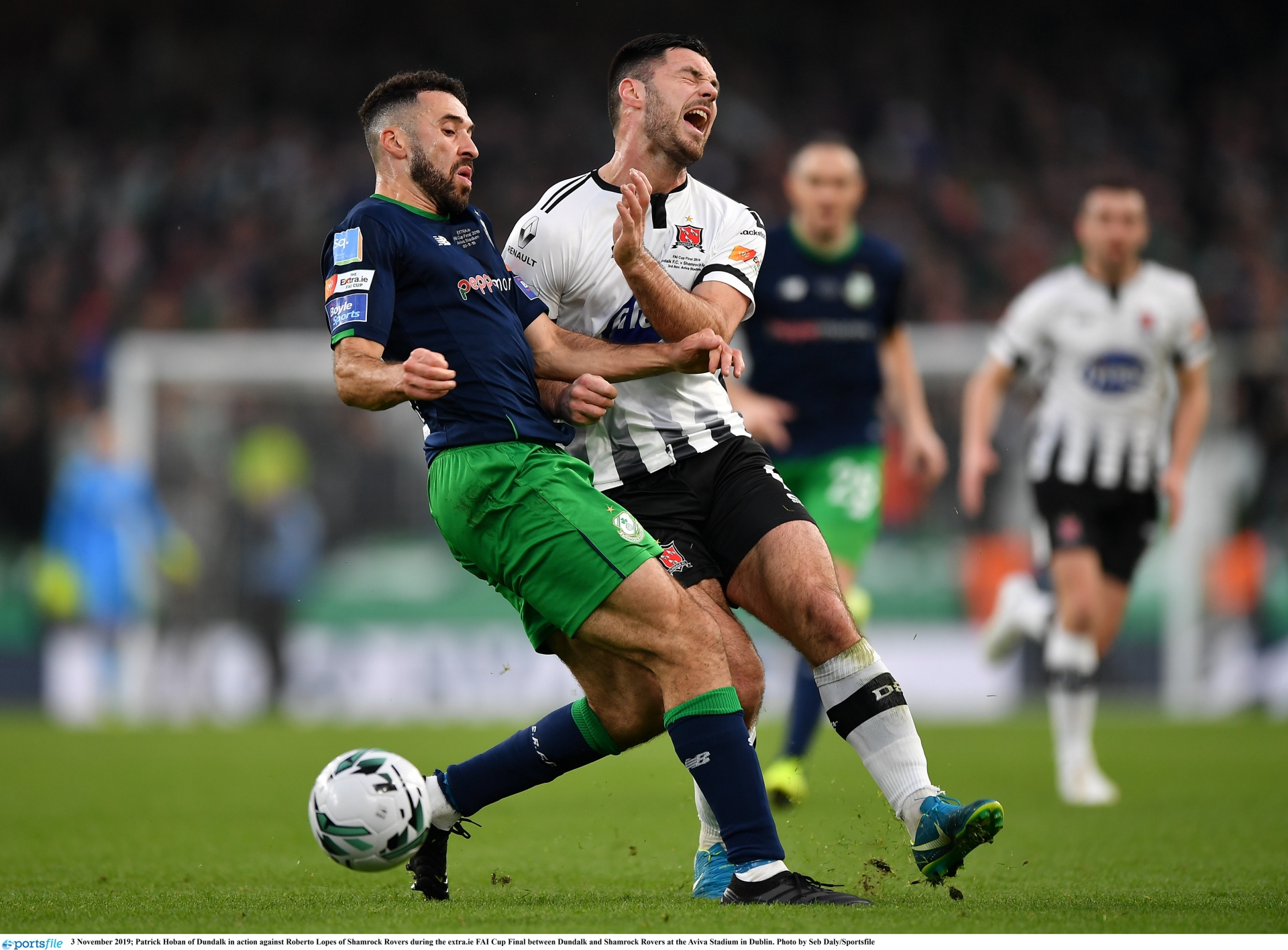 Then it all got a bit romantic as Hoban and Rovers’ defender Roberto Lopes started to get close. Real close. According to Fenlon anyway: “He’s (Hoban) difficult to shift off the ball”. The fact that both Hoban and Lopes were on the ground in a heap together at that exact moment, caused some tittering from the back of the class.

Hoban’s seduction technique won a free-kick in a dangerous spot at the edge of the Rovers box, so it was worth it, and George felt Dundalk were finally getting the measure of Rovers as half-time approached.

Cleary went close with a header, as did the mighty Gartland, and suddenly it all looked a little better for The Town.
George Hamilton was quick to spot that the fourth official did not have a board in his hand as the allotted first 45 minutes elapsed and he knew what that meant - no additional time. Clever boy.

Up to the swanky surrounds of the RTÉ pundits’ box. Peter Collins sounded a bit nasally, like he drank out of a damp glass the night before - poor pet. But ever the professional he got on with it.

He had Stuart Byrne, Alan Cawley and former Shamrock Rovers boss Michael O’Neill on hand to chew over the first half.
Peter was insightful as ever: “There’ll be interesting conversations in both dressing rooms.” Absolutely Pete. 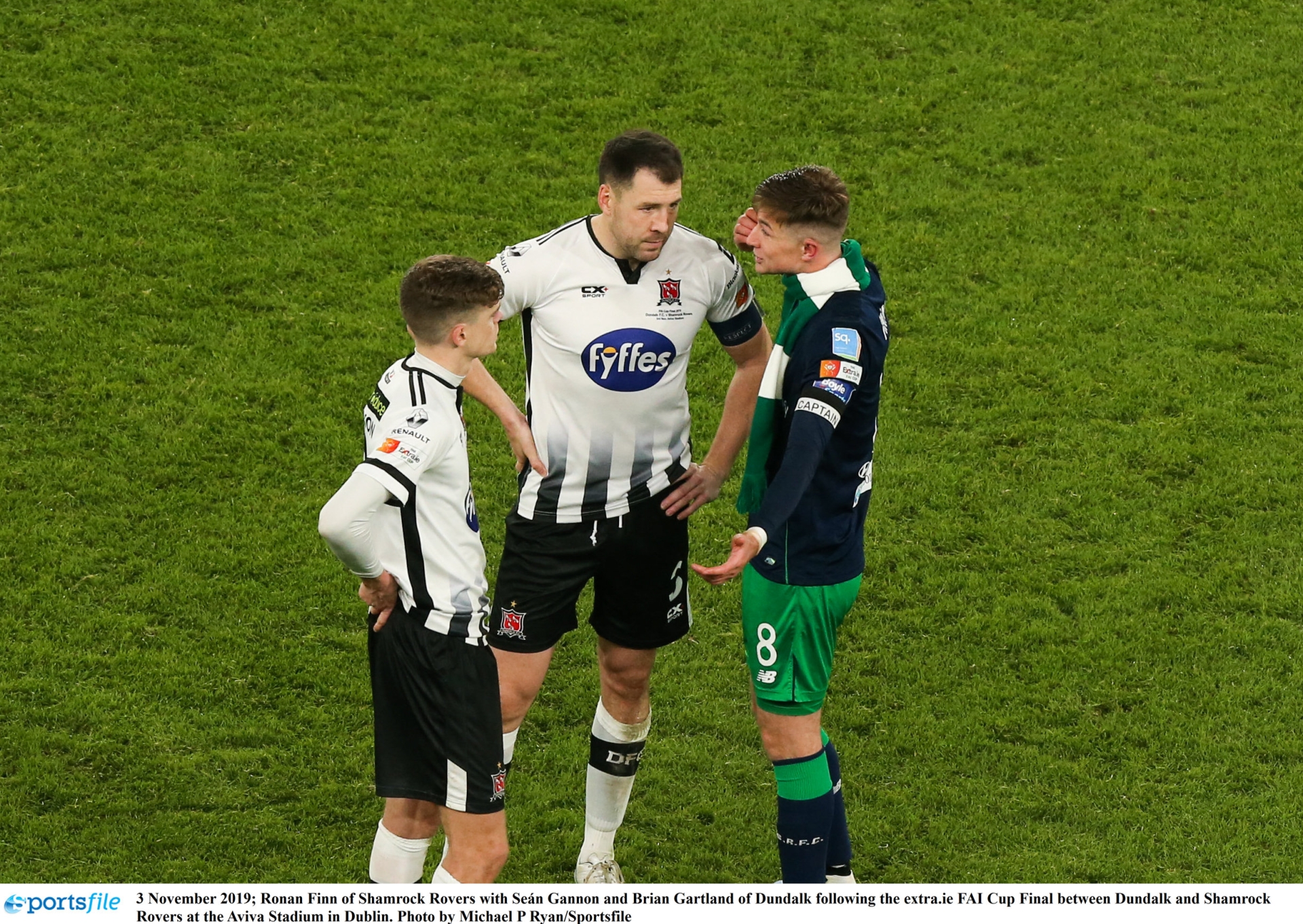 O’Neill then mentioned the unmentionable absence, which we all knew about, but didn’t want to mention: “Dundalk need to get someone on the ball in the middle.”

*A town looks forlornly to the stands for a certain suspended hero.*

The second half opened with an utterance which wouldn’t be out of place in the New Testament: “Jack Byrne opened the whole pitch up,” Fr Fenlon said in thunder-struck amazement.

After checking to make sure the turf at the Aviva was intact, the game resumed, but the Messiah-like figure of Byrne was taking a real grip of the affair. The half ticked on and the stat that seven of the 10 FAI Cup finals in the Aviva have gone to extra-time started to loom ever larger.

‘Touchline Tony’ grabbed the ear of Rovers assistant Glen Cronin after Rogers had - very lightly - brushed an effort over the ’bar. Cronin was incredulous at the referee not giving a corner-kick: “It was definitely a corner. I don’t know why he didn’t give it.” Well he didn’t, so get over it.

Then Tony got into it: “Are you ready for extra-time?” Not now TOD. 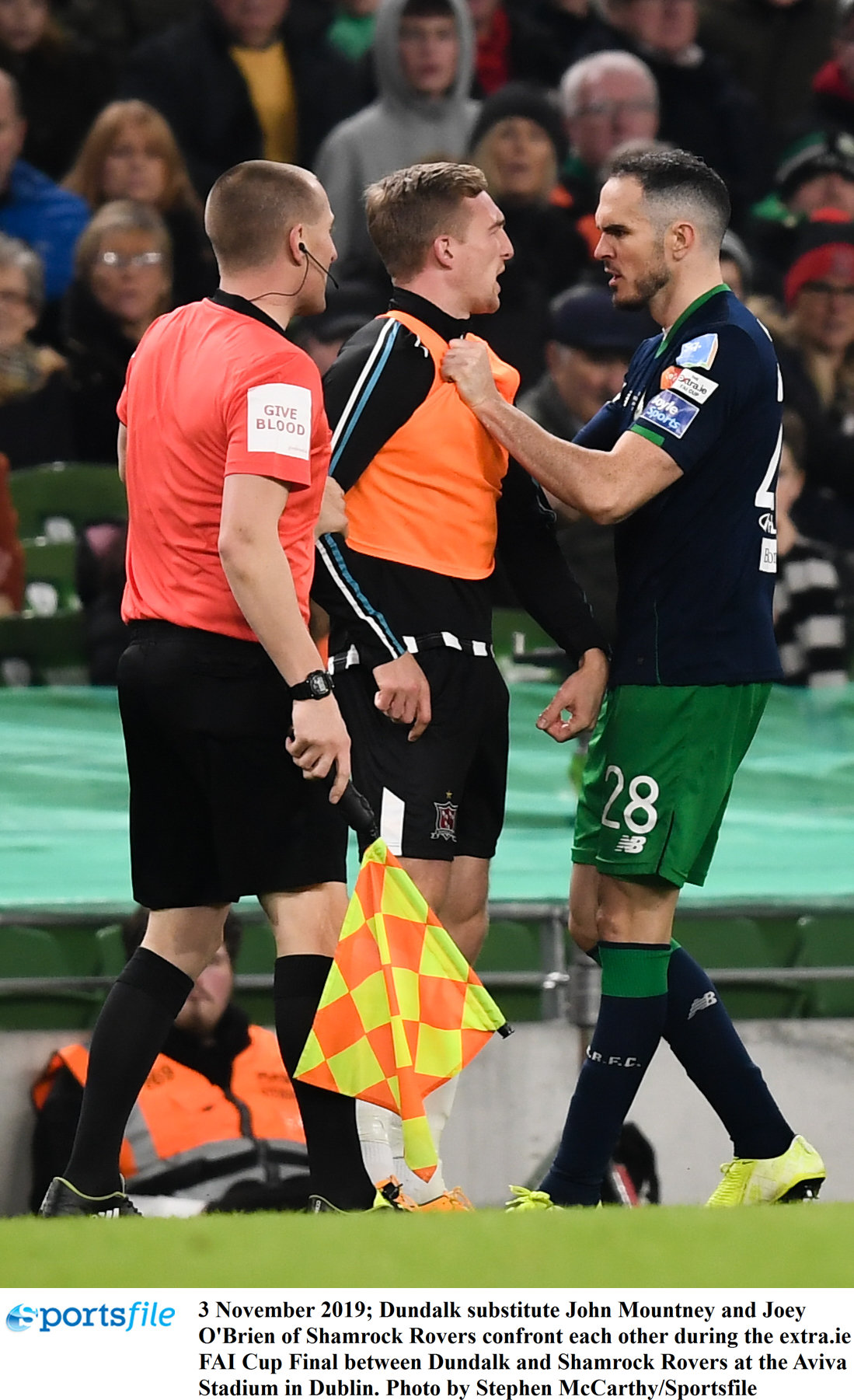 With one minute left, Rovers scored from the penalty spot and it looked like the Cup was heading to Tallaght.

“They’ve got one hand on the trophy, just gotta see the game out.” Pat said, barely containing the ecstacy.

George: “Can Dundalk come back?... It’s looking like the treble isn’t going to happen.”

And on the final goes into extra-time.

Up in the stands, the camera picks out Chris Shields. He puffs his cheeks out and everyone in black and white blesses themselves.

Extra-time was a bit, eh, extra-timey. Both sides wrecked and bodies in bits.

Rovers’ Joey O’Brien and Dundalk’s John Mountney got into a scuffle off the pitch. It was all a bit handbaggy. Mountney was warming up and the ball rolled over to him, he grabbed it and threw it to a team-mate for a Dundalk throw, but Joey thought otherwise and pawed at him. Yellow cards for both, even though our John wasn’t even on the pitch.

Peter added salt to the wounds: “Are they going to play for penalties?”

A switch by Rovers, in taking off Aaron Greene, seemed to confirm that Peter was right about playing for penalties, at least from Rovers’ point of view. Dundalk almost won it at the death, but Rovers’ stopper Alan Mannus clawed away a Georgie Kelly effort and that was that. Penalties.

“Finger nails at the ready,” said a sniffly Peter Collins.

For Stuart Byrne it sounded like penalties could be very dangerous to a player’s health: “The variable is that after 120 minutes of football, your brain is switching off”. Christ, that sounds serious. Maybe we should just flip a coin instead?

Alan Cawley agreed: “I’m still trying to catch my breath, I’m not sure if I’m able for more drama.”

But more drama it was.

And eventually, heartache for Dundalk’s players and fans.

Treble dream punctured. Rovers bridge a 32-year gap. All over.

Still, it was a damn good year all the same.