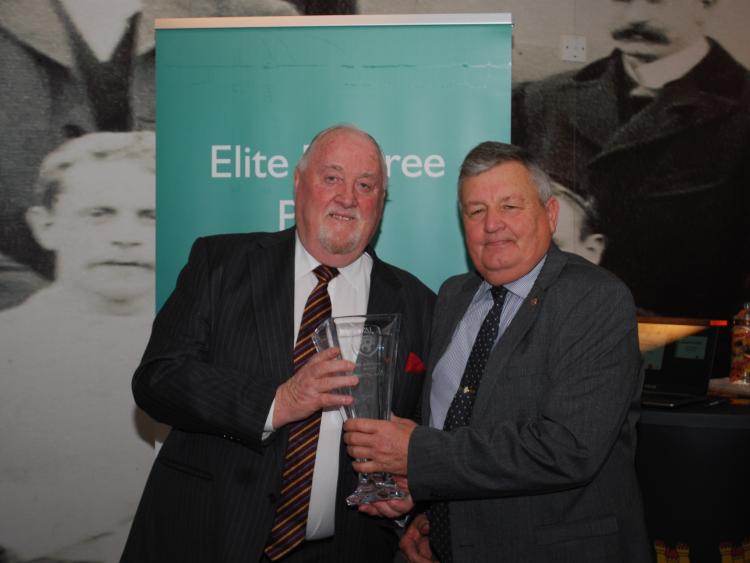 Denis McArdle (right) receiving an award from Paddy Daly in recognition of the 25th anniversary of the Dundalk man’s overseeing of the FAI Cup final.

It’s 25 years since the Dundalk man took charge of his one and only decider, when Sligo Rovers pipped Derry City 1-0 at Ballsbridge.

Officials past and present were in attendance for an event organised by League of Ireland referees, with FAI representative Paddy Daly greeting the winners with their awards.

“It was good to see friends, past and present,” said Denis, who made a speech at the time of his presentation.

“It’s all about camaraderie. The refereeing family are there; people who have refereed from 30 or 40 years ago.”

His assistants on the day, Paul McKeown (Dublin), JP Kelly (Kildare) and John Barry (Limerick), were also recognised for the parts they played, with McArdle’s glassware, he reliably informs The Democrat, now sitting on the mantlepiece beside the Waterford Crystal he received 25 years ago.

But, what does he recall from the match?

“I’m the only referee who was interviewed by Jimmy Magee before a final,” he quips.

“The weather was that bad that day, I had to inspect the pitch before the match to give it the go ahead.

“Then Jimmy Magee just asked about the footwear and stuff like that; a nice wee chat.”

McArdle was also involved in the 1986 final, where Shamrock Rovers saw off Waterford. He ran the line on that occasion.