INSIDE TRACK | 'I can say, therefore, that I've never seen Dundalk beaten in a Cup final' 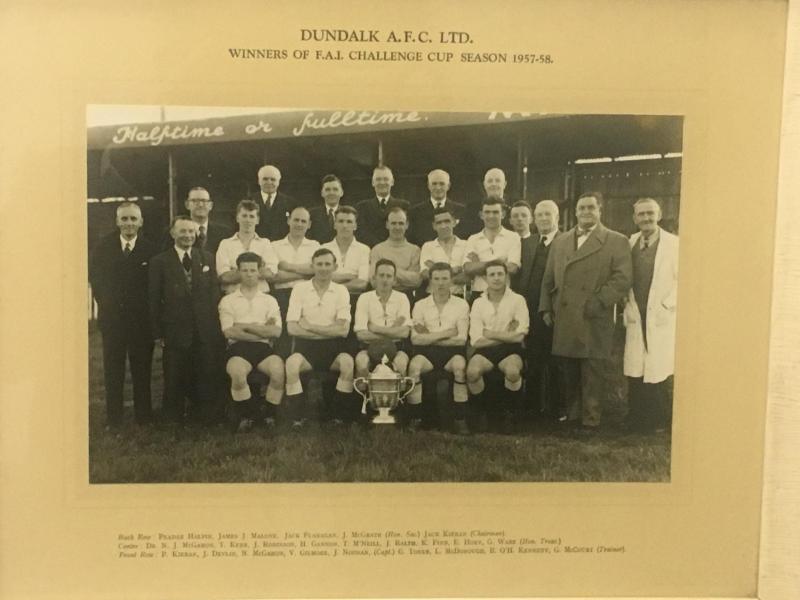 The Dundalk FC team that won the 1958 FAI Cup final against Shamrock Rovers.

The norm on descending the steps of Amien Street Station (as Connolly Station was then known) was to turn right.

There’d be the obligatory stop-off at Lloyds (not for me and my brother, but for our minder – we’d have to wait at the door). It would then be off to Croke Park to see Louth play in the championship, or in a league game with Dublin.

It was different, however, on a March Sunday in 1958. Instead of turning right we went straight across the road, and then on up Talbot Street. On reaching O’Connell Street we turned right, and before arriving at our destination passed the Anchor Hotel, which, if it wasn’t then owned by Derryhale’s Matt Donnelly, was at a later stage.

I could have made a wish on stepping inside Dalymount Park – it was the first time I’d ever been there. And if I’d made that wish it would be for Dundalk to beat Shamrock Rovers in the FAI Cup final, due off at 3:30.

Rovers were appearing in their fourth final in five years, Dundalk were seeking a first title since the swashbuckling Joe Martin led the attack in the 1952 final defeat of Cork Athletic.

Many of the greatest-ever Rovers were lined up, Coad, Nolan, Tuohy, Ambrose, Mackey and Burke. Dundalk had three locals included, Joe Ralph, Ken Finn, Niall McGahon and two others from just down the road, Newry’s Ted McNeill and Drogheda’s Tommy Kerr.

Dundalk had defended heroically on the way to the decider, and enjoyed no little good fortune. The first round defeat of Cork Hibernians – the team’s first match win since the ’52 final – had seen the backs give nothing away and Hubie Gannon’s only goal of the tie causing Hibs considerable angst.

Solid back play would continue in the three other matches leading to the final. And it was the same against Rovers. The boys at the back were unbeatable, and at the other end Gannon headed one home to decide it.

I’ve never been back to Dalymount, while the only other soccer grounds in Dublin I’ve been to is The Aviva. But that was to watch rugby. I can say, therefore, that I’ve never seen Dundalk beaten in a Cup final. There’s one for Jim McCourt as he sets out on a familiar journey on Sunday. Good luck.