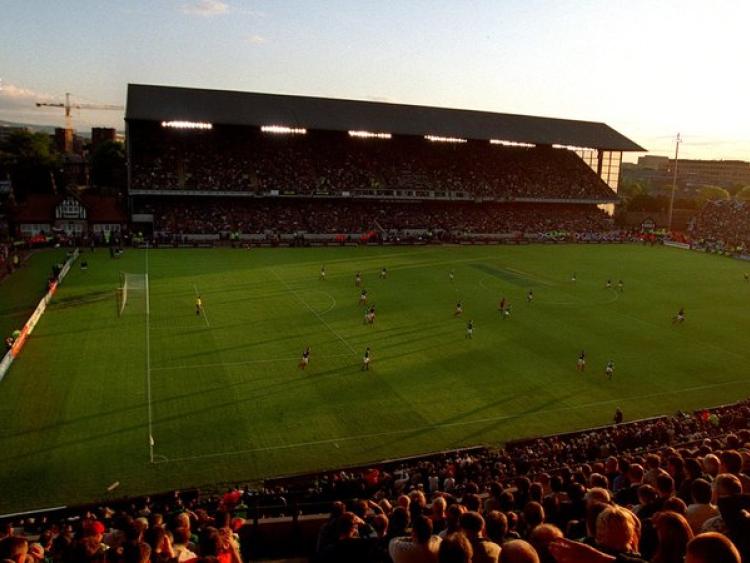 I can vividly remember the Dart running under the stand across the way from where we were seated in Lansdowne Road that day. It was a strange sight, and one which stood out as entirely odd within the context of an FAI Cup final, or any sporting occasion for that matter. I thought it was remarkable every time the train appeared and then disappeared under the stand.

Why, in God’s name, would you put a railway line straight through a football ground?

Still, the old Lansdowne Road was, to my 10-year-old’s mind, a sports cathedral like no other. Mind you, I had been raised on a low-bar diet of Oriel Park and the dog-track on the Ramparts.

I was with my dad that chilly day in May 1993. I’m not sure if we took the train from Clarke Station - but I’m fairly sure we did; driving down to the southside of Dublin back then seems an unlikely proposition.

Jody Byrne was in goal for Shelbourne - it was his ginger moustache I remember most looking back. It stood out in sharp contrast to the shock of white-blonde hair on his head. Jody sort of looked like a plumber or a best friend’s dad, I always thought. 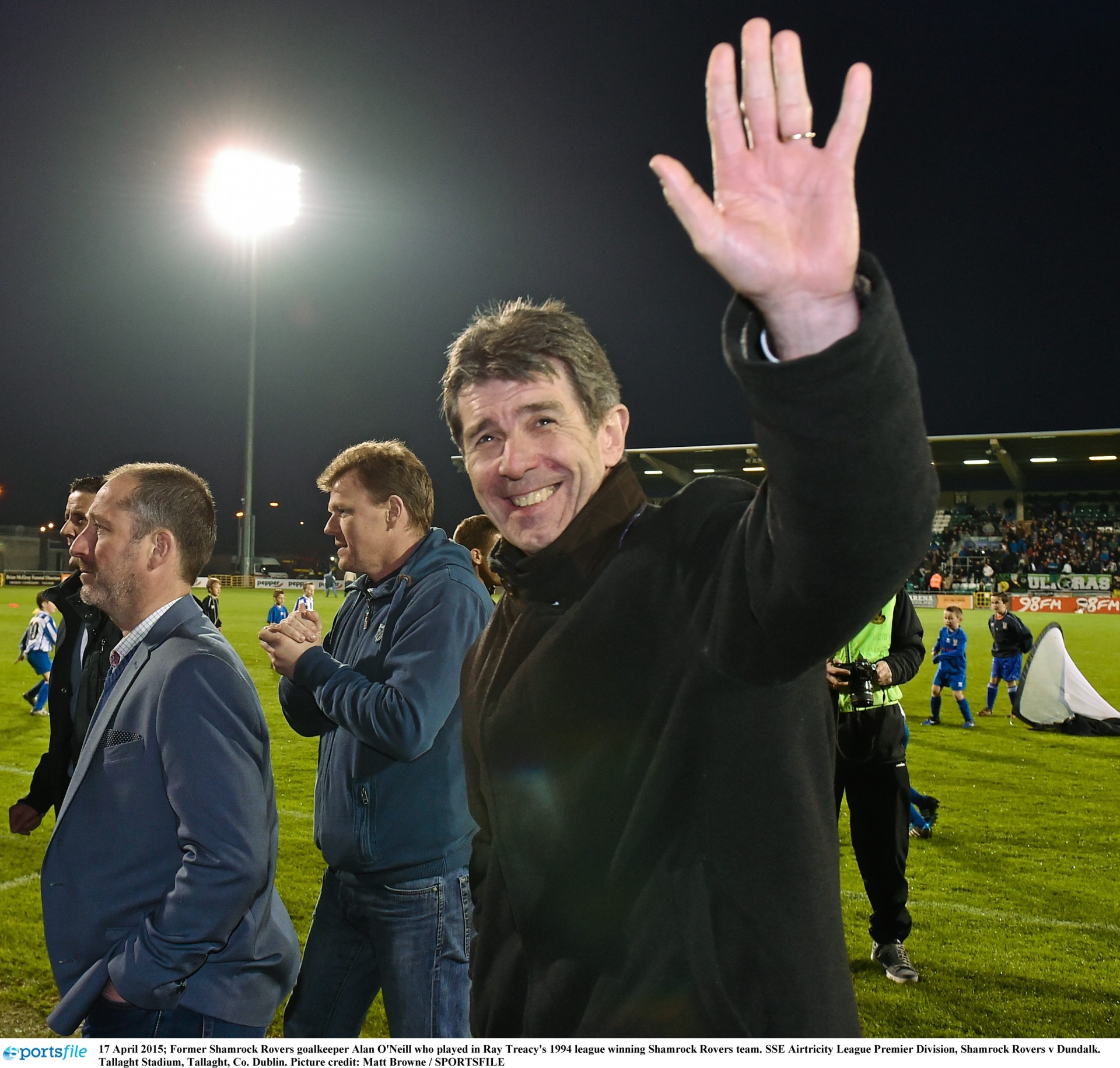 But as a budding shot-stopper myself, I was totally in awe of Dundalk’s own Number 1 - Alan O’Neill.

In those years, when Dundalk were playing at home, I used to run up behind the town side goal at Oriel Park, before the match started, to get as good a view as possible of O’Neill during his warm-up routine.

He always had a small sports bag clutched under his oxter - probably with a spare pair of gloves in it - and a towel, which he placed in the side-netting before going through the motions of his warm-up. Everything seemed so precise and pre-planned were Alan was concerned. I remember thinking even then that he didn’t really look much like a footballer, more like a regional bank manager moonlighting between the sticks, but definitely not a top Irish goalkeeper idolised by a then 10-year-old boy.

On the day of the final, high up in the stands at Lansdowne Road, I wasn’t afforded my regular viewing opportunity - O’Neill was away from me, down on the pitch. We were miles apart.

I didn’t know it at the time either, but O’Neill’s Dundalk career was drawing to a close and the final would be his last ever outing for the Lilywhites; the season eventually concluding with him claiming the Player of the Year gong. 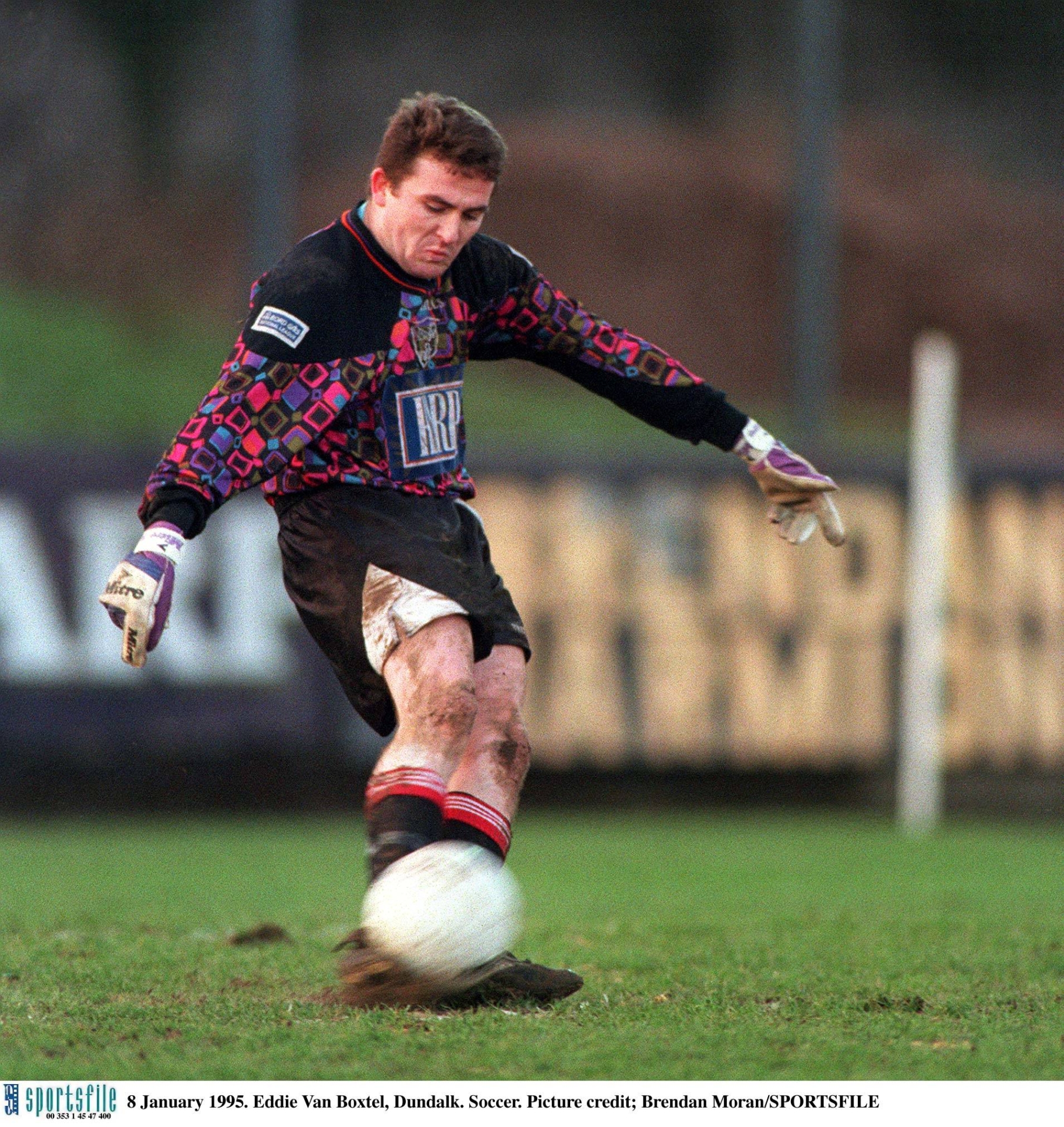 His deputy that day - and his eventual successor - was Eddie Van Boxtel. He would claim the Number 1 jersey the following season and earn a place in the hearts of Lilywhite fans everywhere by becoming the only man to save an Eric Cantona penalty in 1994 (or so the legend has it), when Manchester United came to Oriel for a pre-season friendly. And, of course, being an integral part of the league-winning team a year later. He subsequently gained infamy when he was jailed in 2015 after admitting to possession of cannabis worth €3.5m. There was rarely a dull moment when Eddie was around.

The awful quality of the YouTube footage of the 1993 final makes it look like it took place aeons ago. The distressed terraced area behind the goal at Lansdowne was near empty. The recorded attendance that day was just 14,000. Not much considering last year’s final in the new-ish Lansdowne Road drew a crowd of over double that figure.

The match day programme was a thing of classically restrained beauty. Although it was the early 1990s, it looked like a relic from the 1960s, but with a nod to modernity in the form of added colour. Dad used to mark off the players’ numbers with a pen in the blank white boxes beside their names as the teams were being called out over the tannoy. He was meticulous about this; it was the quantity surveyor in him I always felt. That programme remained in the Lynch household for many years afterwards and was last spotted in a drawer in the box room upstairs.

Dundalk’s black and white vertically halved strip, with the Harp Lager logo plastered across the chest, was a belter of a jersey too. Coincidently, at about the same time, I had started supporting Blackburn Rovers in the freshly-minted English Premier League - I clearly had a thing for a half-and-half kit with a brewery sponsor (FYI, Blackburn’s was McEwan’s Lager).

I recall the choice of snacks on offer in Lansdowne being leaps and bounds ahead of the usual Oriel Park fare of Mars Bars, styrofoam-cupped tea and Tayto crisps - Lansdowne had pies and sandwiches and a vast array of chocolate bars and sweets.

The match itself was not one for the purists unfortunately. A 60th minute converted header by Greg Costello did for the Town in the end. Future Dundalk legend Garry Haylock (“Tell all the Bohs you know, Garry Haylock is better than Crowe”) provided the all-important cross from the right. The rest of the match drifts away from me now, yet the off-colour venting and furious indignation of the Dundalk fans all around me sticks out most today. Such a creative and inventive use of harsh and despicable language - it was both commendable and enlightening for a 10-year- old to hear, while thankfully not understanding most of it.

We didn’t hang around for the Shels celebrations after the full-time whistle went. Out into the concrete concourse beneath the stand and off into the evening air. Dundalk calling and back, eventually, to the comforts of Oriel Park the following season.

Two years later, in May 1995, the pain of that loss was eased a bit when Dundalk, somewhat improbably, won the league title on the final day of the season.  Few will forget those tense moments after the final whistle went - The Lilywhites having just seen off Galway by two goals to nil. A hush descended on the Carrick Road venue and all present stopped dead in their tracks, listening in to hear the end of the other matches that day on the ground’s PA system.

After a nerve-shredding few minutes, table-toppers Derry City ended up only drawing with Athlone and the Oriel crowd erupted.

It also helped that Shelbourne were in the running for league glory that day too and came up short.