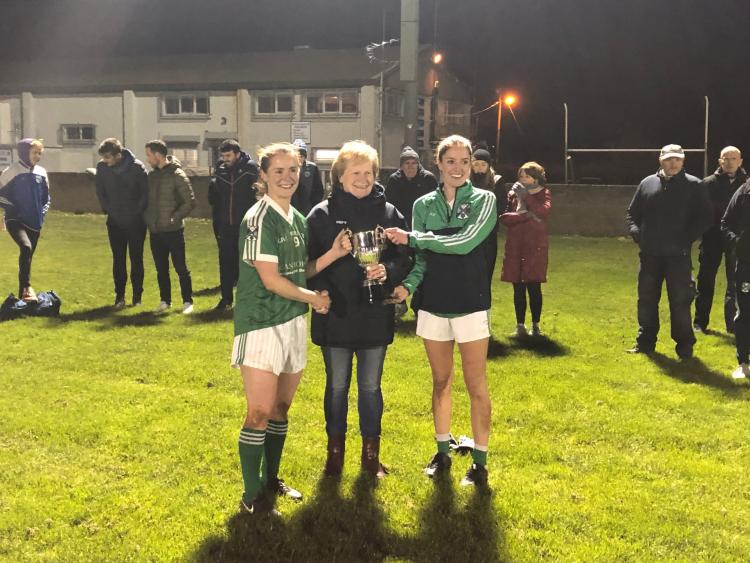 Stoppage time points from Sandra Neary and Ciara O’Connor earned Geraldines the Subsidiary League title on Wednesday night after a pulsating clash with the hosts in Roche.

It had looked as though Gers were going to ease to the crown having struck for three early goals, which helped them lead 3-6 to 1-4 at the interval, but an incredible burst of scores had Emmets level within five minutes of the second period’s start.

And Mickey Heeney’s charges looked set to send the senior championship winners tumbling to a second final defeat in four days - after Sunday’s Division One decider loss to Cooley - when Jenni McCourt gave Roche the lead with three minutes to play.

However, the girls in green finished strongly, converting thrice unanswered to earn the silverware.

For Roche, it’s another bitter pill to swallow in a season which saw them reach the SFC last four and Division Two final. On this occasion, it was their slow start which cost them significantly.

Rebecca Mooney, Fionnuala Cafferty and Victoria Fee (penalty) all found the net before Roche got off the mark, and Gers certainly don’t need 10-point headstarts.

Caoimhe Maxwell got Roche’s revival underway, but five of the next nine points were shot by the winners, who were well on course for victory by the interval.

No-one expected the Faughart Parishioners to lie down, but it seemed too hard to fathom for them to hit back in the manner they did. Yet, after Sarah McArdle stroked home from the penalty spot and the incredible Seona Halligan rattled the top corner, points from Tracey Rogers and teenager Halligan had those clad in blue on level terms, 3-6 apiece.

Another of Roche’s budding talents, captain Louise Byrne, found the net in a subsequent attack as the underdogs led into the closing period, where points were traded in even doses. Emmets had the ball in the net for a fifth time, only for Caroline O’Neill’s flicked effort to have been ruled out for square ball - referee Paul Burke combining effectively with his umpires.

And Gers’ experience and craft showed in the dying embers, O’Connor and Neary driving their side forward and then registering when the opportunities arose.

A thriller, on a bitterly cold night.