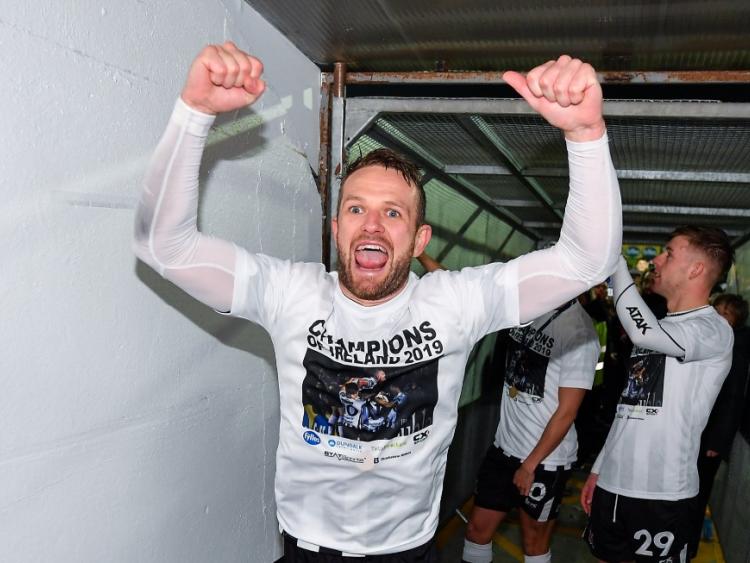 Dane Massey says Dundalk FC will never get bored of success and having returned to goalscoring form in recent times there is no doubt he will be eyeing more Cup final magic against Shamrock Rovers.

Dane Massey says Dundalk FC will never get bored of success and having returned to goalscoring form in recent times there is no doubt he will be eyeing more Cup final magic against Shamrock Rovers at the Aviva Stadium on Sunday.

Massey, 31, had only scored one goal – in the President’s Cup in Cork back in February – up until last month, but he has found his scoring touch at an interesting time with a sweet strike at Sligo Rovers in early September followed by a brilliant header against St. Patrick’s Athletic last Friday.

That was his first goal at Oriel Park since 2017. With the FAI Cup decider against Rovers just around the corner, it brought back memories of his brace against the Hoops in the EA SPORTS Cup final back in 2014 when Dundalk won 3-2 at home – the very first trophy of this golden era.

The left-back has gone on collect another 12 winners’ medals since that success and this coming weekend he will aim to make it number 14.

This could be the sweetest of the lot as it would see Dundalk become the second-ever club to win the domestic treble, with Derry City’s 1989 team the only one to achieve the feat to date.

“You want to retain it. You want nights like Friday, celebrating with your family and the fans. They are the nights you’ll never forget in your career. Keep them coming.

“It’s five years-in-a-row in the Aviva Stadium and we were fortunate enough to play there in the Champions League. It’s a fabulous stadium. You don’t get too many opportunities to play in it. It’s our national stadium. We’re looking forward to it and it will be a massive high for all the boys playing.”

On his recent return to scoring, Dane – who seemed to particularly enjoy his goal on Friday – added: “I don’t get many goals during the year, so when they come, I have to celebrate! I’ve hit the post and the bar a couple of times this year. It looks like my luck is in the last few weeks. I’ll take it!”

Dundalk have won two and lost two of their four successive FAI Cup finals. Last year saw them lift the trophy for the 11th time after goals in either half from Seán Hoare and Patrick McEleney defeated Cork City, 2-1.

“The Cup final is all about on the day and who performs,” Massey said, “and who can handle the pressure the best. We’re really looking forward to it. We were down the town there getting our suits fitted, the town is black and white, and everyone is wishing us the best of luck, which is great. The build-up has been fantastic.”

With the final coming up, Dundalk were again unable to really celebrate their league trophy lift, but Massey says that is all part of the job.

“We can’t really let loose yet,” he said.

“Even when we won the league (a few weeks ago), we had to behave ourselves. We had one or two nights. When you’re at the top and you’re in the finals of everything, basically – you want to be in the final of everything – that’s what comes with it as well. You have to be professional.

“It’s shaping up to be a great game on Sunday. We played Rovers at home in the league and we won 3-2. Fortunately for us, that was the result we needed to get over the line. Our form has been good, we’ve been confident and, likewise, I’m sure Rovers have been training extra hard for it. Hopefully, it will be a great game.”