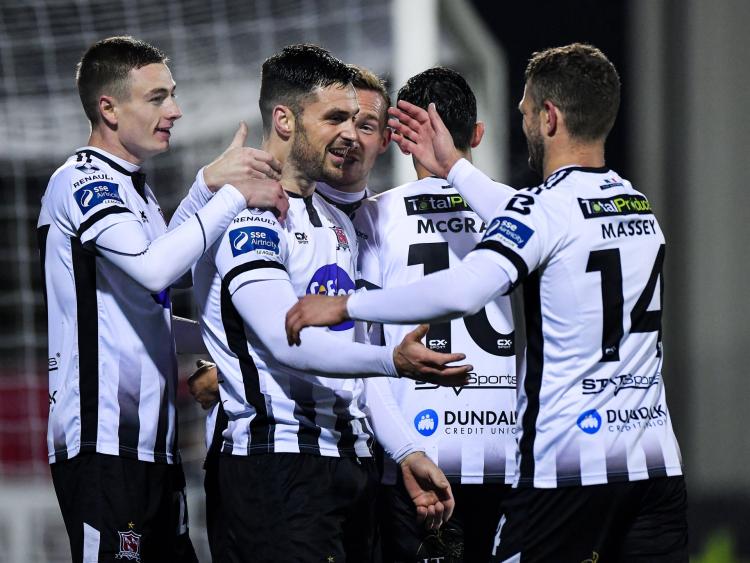 Dane Massey’s first home goal of the season helped put the seal on an unbeaten league campaign at Oriel Park for the champions who lifted the SSE Airtricity League Premier Division trophy after a 4-0 win over St. Patrick’s Athletic on Friday night.

While Dundalk were looking to bounce back after successive defeats, their opponents – managed by former Lilywhites captain Stephen O’Donnell – needed to win and required a huge favour from playoff-bound Finn Harps in Derry if they were to gain unlikely European qualification.

The Saints did threaten a lead goal a couple of times, but Dundalk had started well themselves and they deservedly broke the deadlock midway through the first half when Massey connected powerfully with John Mountney’s free-kick.

It was 2-0 before half-time as Robbie Benson took advantage of St. Pat’s going to sleep at the back, with his ball over the top latched onto by Daniel Kelly who was cool in scoring for the 14th time this season.

The result was put beyond any doubt on the hour-mark. Dundalk broke at pace and Kelly delivered a brilliant cross from the right for Patrick Hoban whose strike at the back post was blocked by Brendan Clarke but the ball just about crossed the line for his 20th goal in all competitions.

Dundalk were aiming to finish their league campaign unbeaten at home and for the game head coach Vinny Perth had made five changes from last week’s narrow defeat at Cork City.

Gary Rogers returned in goal and captain Brian Gartland came back in along with Daniel Cleary, Jamie McGrath and Mountney, who made his first appearance since suffering a metatarsal injury in August.

The champions began brightly but it was St. Pat’s who had the first effort on goal as Chris Forrester’s strike skipped just past the post.

Dundalk forced a number of corners after that without threatening a breakthrough. Derry City then hit the front against Harps at the Ryan McBride Brandywell Stadium, effectively ending the Saints’ hopes of a top-four finish.

They still remained a threat, though, and they almost took the lead on 20 minutes. Forrester picked out James Doona on the left and – confident following his two goals in Derry on Tuesday night – he let fly with a powerful strike that rattled the top of the side-netting.

Dundalk almost immediately broke the deadlock. Mountney delivered a fabulous free-kick into the box for Massey who connected powerfully as his header flew past Clarke into the bottom corner.

It should have been 2-0 before the half-hour when Kelly delivered from the left for Hoban but the striker’s header lacked the power to trouble Clarke.

Dundalk doubled their advantage two minutes before the break as St. Pat’s went to sleep. Benson clipped a quick pass into the path of Kelly who was left with just Clarke to beat and he made no mistake with the finish.

Dundalk were counting down to the trophy lift but they still went about their business and added a third goal on 61 minutes.

They broke at pace from a St. Pat’s corner and Kelly’s cross from the right found Hoban at the back post with the striker’s shot blocked by Clarke but the ball bounced towards goal with the linesman signalling that it had crossed the line.

Replays showed that it was a very close call and Clarke was annoyed by the decision but the goal stood.

The visiting ‘keeper then produced a fantastic stop to deny Dundalk a fourth as he smartly kept out substitute Georgie Kelly’s header from a Hoban cross.

Rogers was called into action at the other end to save from Forrester’s well-struck free-kick as the visitors threatened a consolation.

But the last word was left to Dundalk as Georgie Kelly – who struck the underside of the crossbar only moments earlier – rose at the back post to bury Massey’s cross.