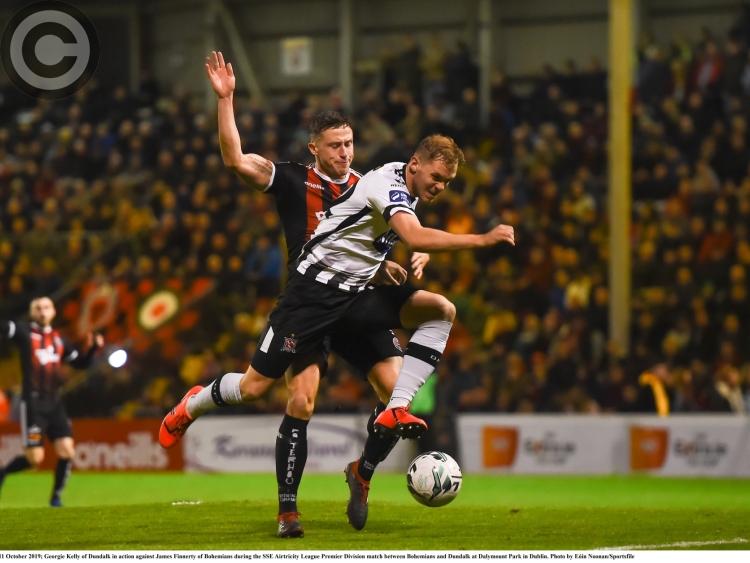 Dundalk FC’s 31-match unbeaten record in domestic competition stretching over six months came to an end as the champions’ back-three experiment resulted in a 2-1 defeat by Bohemians at Dalymount Park on Friday night.

Vinny Perth’s men had been comfortable in their new-look formation but they were stunned before the half-hour when Luke Wade-Slater stole in give the European-chasing Gypsies a precious lead.

Dundalk – with the title long secured – entered this match with an 17-point advantage over Shamrock Rovers at the top of the table and were chasing a 10th straight league win.

However, this was the night when their proud club records – for both domestic (31) and league (24) games unbeaten – finally came to a close, as their aim of becoming the first League of Ireland team to break 90 points went up in smoke.

Seán Hoare had threatened an early second-half equaliser with a long-range strike but, soon after, Andre Wright’s 64th-minute finish ensured a valuable victory for Bohs who are now within touching distance of a long-awaited return to UEFA competition.

With time up, substitute Michael Duffy grabbed a consolation for Dundalk with a good strike but it was the final action of the game as the referee just about allowed the restart. 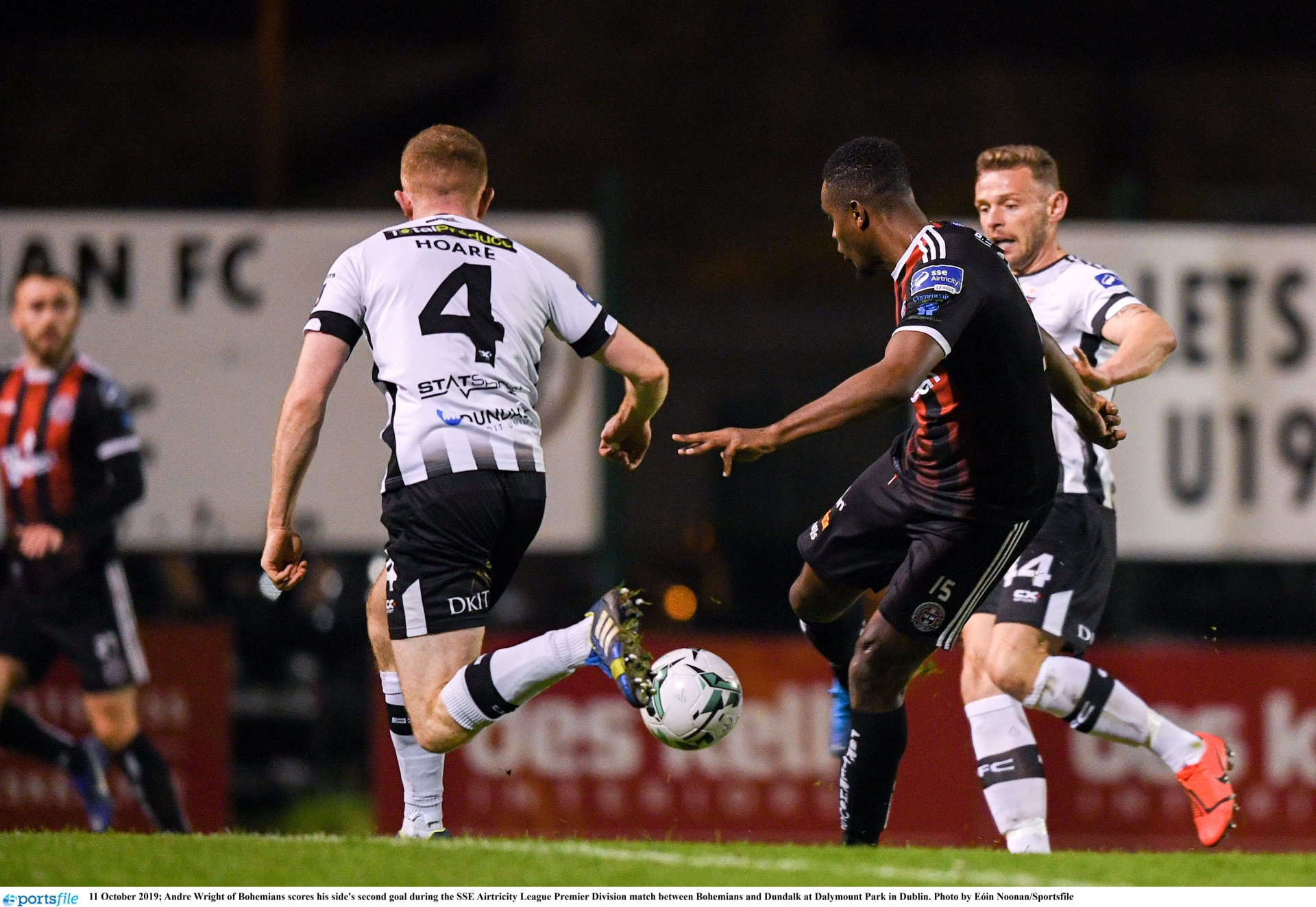 Dundalk had reported a flu in the squad during the week and for the game Perth freshened up his side with five changes to the lineup from the 1-0 win over Derry City at Oriel Park. The head coach experimented with a back three.

Bohs boss Keith Long, meanwhile, named an unchanged team to the one that fortuitously defeated Cork City in Dalymount Park seven days earlier. The former Dundalk player was once again without the services of Irish U21 international Danny Mandroiu as well as injured quartet Keith Buckley, Andy Lyons, Darragh Leahy and Dinny Corcoran.

Dundalk were comfortable in the early exchanges, controlling the play. They had an almost-instant attack with wing-back Cameron Dummigan delivering a cross for Georgie Kelly but the striker was adjudged to have handled the ball.

Kelly was at the centre of the champions’ first real opportunity in the 12th minute which came from down the left as McGrath crossed for the Donegal man who glanced a header wide.

McGrath was again the creator past the quarter-hour for Seán Murray but his shot lacked the power to seriously trouble James Talbot. There was then an injury concern for McGrath who went down and received treatment but the young midfielder was able to continue. 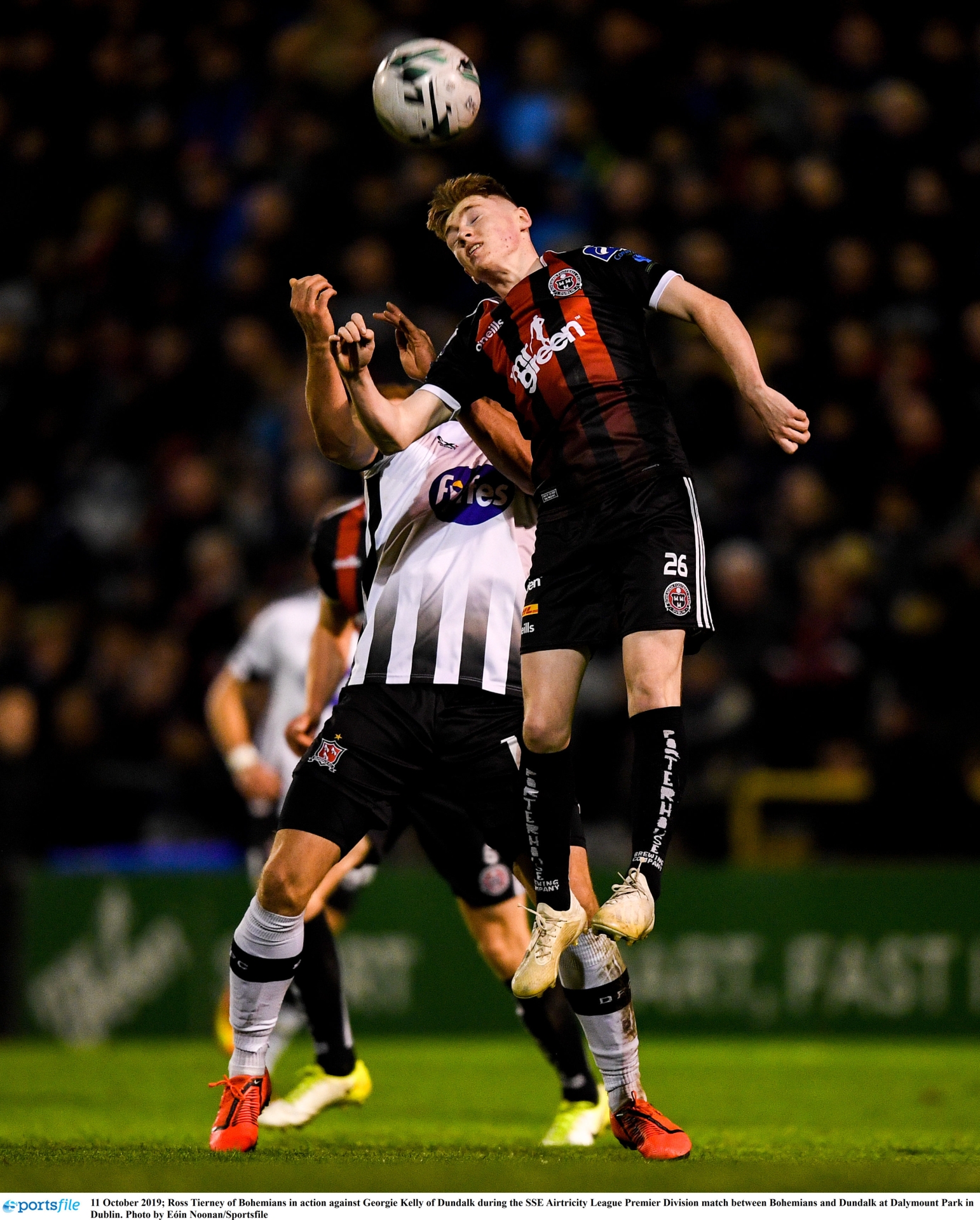 Bohs hit the front against the run of play in the 28th minute when Wade-Slater got in behind Massey, latching onto a through-ball and, with Gary Rogers – perhaps needlessly advancing, the 21-year-old struck to the net.

Dundalk were clearly rocked by that goal but Andy Boyle – one of the back three – attempted to inspire an equaliser before the break with a driving run into the Bohs half, which ended with Dummigan on the right but his dangerous cross was well defended by the Gypsies.

That was followed directly by the departure of centre-half Rob Cornwall on a stretcher. That injury, and the earlier stoppage for McGrath, contributed to five minutes of added-on time.

Bohs could have made it 2-0 in the third of those when, out of nothing, Keith Ward nipped in behind Hoare but the little ex-Lilywhite lifted the ball over the target. Talbot then flapped at another Dummigan cross with the ball dropping to Daniel Kelly but the winger seemed to hesitate as he failed to take advantage at the back post.

Wade-Slater almost gave Bohs a cushion early in the second half but Boyle blocked his shot as Dundalk stayed in the game. In the 52nd minute, Daniel Kelly went down on the left of the area, heading away from goal, but there were only half-hearted penalty appeals from the visitors.

On 55 minutes, Hoare picked up possession in midfield and moved forward before unleashing a low 30-yard drive that Talbot palmed away.

Murray then struck over as Dundalk looked to raise the tempo. Perth called on Duffy and Gannon from the bench on the hour-mark, but by the 64th minute, it was 2-0 as Wright held off Hoare and fired to the net.

Lido Lotefa was then introduced in a last throw of the dice for Dundalk. However, it was Bohs who threatened another.

Ross Tierney could well have made it 3-0 with nine minutes remaining when he found himself in on goal but he directed his shot the wrong side of the post. Murray did go close with a deflected strike in the 87th minute, but there was never any real sign of a revival.

With the clock well past the injury-time indicated, Duffy struck a consolation with the final kick of the game which means Dundalk have yet to be beaten by more than a single goal domestically this season.

Next up for the champions is a trip to Cork City – who will enter that on the back of their first win under Neale Fenn after beating 10-man UCD 3-2 at Turner’s Cross. 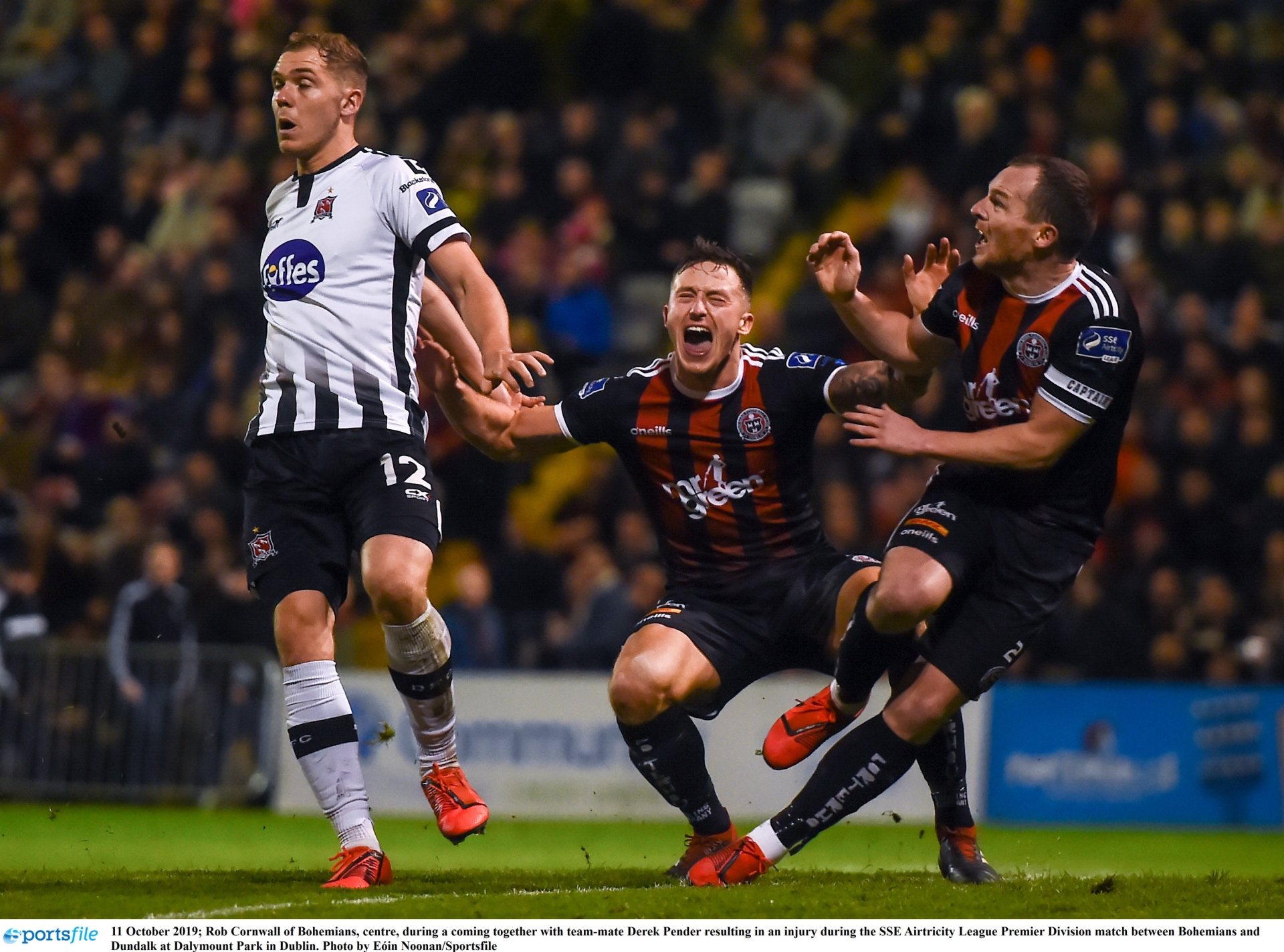