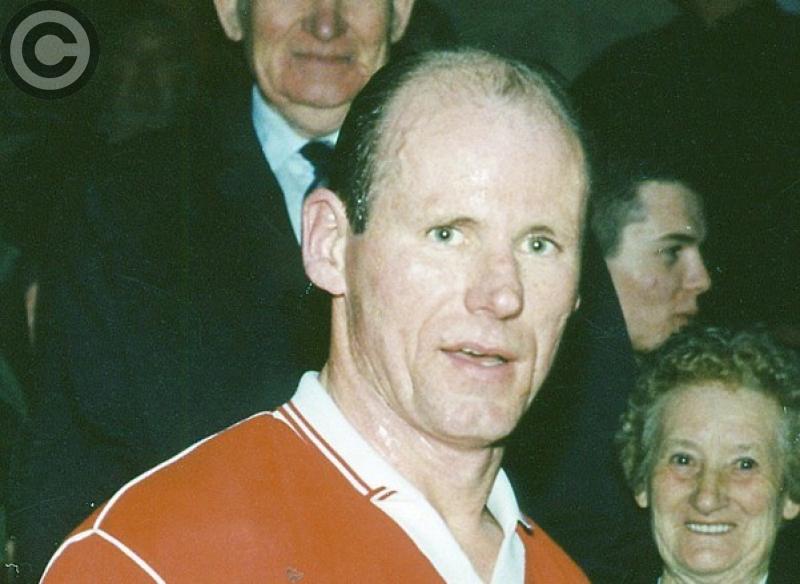 There’s JP Rooney, who, if he hasn’t already celebrated his 40th will do so before the year is out. The late Stephen Melia was four years older when he got the reward his career deserved. (Pic: AK)

Newtown Blues will emulate the Cooley Kickhams team of the 1970s if they beat Naomh Máirtín in Sunday’s senior football final, but won’t create a record. That belongs to predecessors of theirs, the great Blues team of the ’60s.

Having won the title for the first time in a quarter of a century, beating Mattock Rangers in the 1961 final, Blues went on a run that brought them outright victory four years running. That charge would have extended to seven successive titles had they not been beaten by a Muckle McKeown-inspired O’Raghallaigh’s in the 1965 final.

McKeown was by then well established as one of the county’s leading forwards, and he was placed, as usual, in attack for the semi-final defeat of Roche Emmets. For the final, however, the selectors, his father, Mick senior, among them, had Muckle at centre half-back, with the specific task of shading one of Blues’ leading lights, Blackie Judge.

The dividend was huge, McKeown going beyond his brief. His brother, Paddy, netted in the first minute, and at half-time it was 1-6 to 0-1, Mickey Leech, who would change sides in a later stage in his career, also finding the mark. It ended 1-9 to 0-5, victory giving O’Raghallaigh’s their first - and so far only - title. A third McKeown brother, Fergus, was also on duty, along with a Louth legend whose career was tapering off, Paddy McArdle.

Blues recovered to win the following two titles, giving them six in seven years, and after surrendering to St. Mary’s in 1968, brought their tally to eight in a decade with back-to-back successes.

As it’s been with Dublin for the past few years, Blues go into Sunday’s final with few, if any, neutrals on their side. It’s all because of who they are playing. This is a repeat of last year’s final, and still fresh in followers’ minds is the manner in which Naomh Máirtín, seeking a first-ever title, faltered badly in the final furlong.

Six points clear, their supporters ready for a pitch invasion, Máirtín’s made one grievous error at the back, and it all went pear-shaped after that. Louth Gaelic football’s biggest prize was swiped from under their eyes.

But, if, as they say, you have to lose one before you win one, The Jocks are perfectly poised to gain compensation. Teams that have done it in fairly recent times - win next time out having lost on their only other appearance - are Sean O’Mahony’s, St. Patrick’s and St Fechin’s. There may be others, but these three are the ones that come readily to mind.

Máirtín’s have this page on their side - and that might not have them punching the air. They were the long-range tip to take the title back a couple of months ago, and since then have kept hopes alive with some solid displays.

And there’s JP Rooney, who, if he hasn’t already celebrated his 40th will do so before the year is out. The late Stephen Melia was four years older when he got the reward his career deserved, in 2006. It’s for certain, the acclaim with which the St Joseph’s clubman’s win 13 years ago was greeted would again be in evidence if the player he once shared county team duties with was to succeed on Sunday.