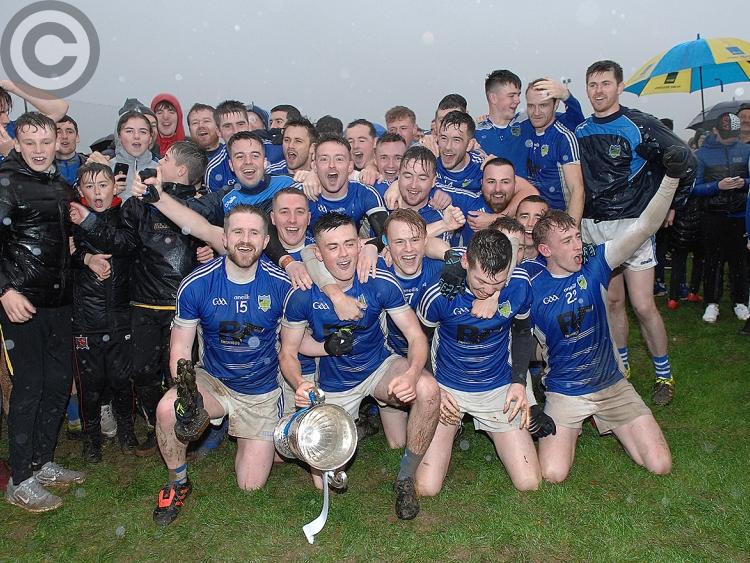 A simple review of Roche Emmets’ illustrious history will tell you the royal blues don’t come by titles that overly often, or easily. But, as manager Paddy McGuinness put it after Saturday’s replay ecstasy, “championships don’t come in lucky bags”.

“What did it take us, eight games?,” inquired Man of the Match Kevin Callaghan at full-time. “Most teams do it in five, but Roche would have to do it in eight…”

In the driving rain, their heartbeat, midfielder Liam Dawe, entered his name alongside club greats, Jim McArdle, Mick Brady and the like, by becoming just the sixth Roche captain to lead a band of Faughart Parishioners to such glory. 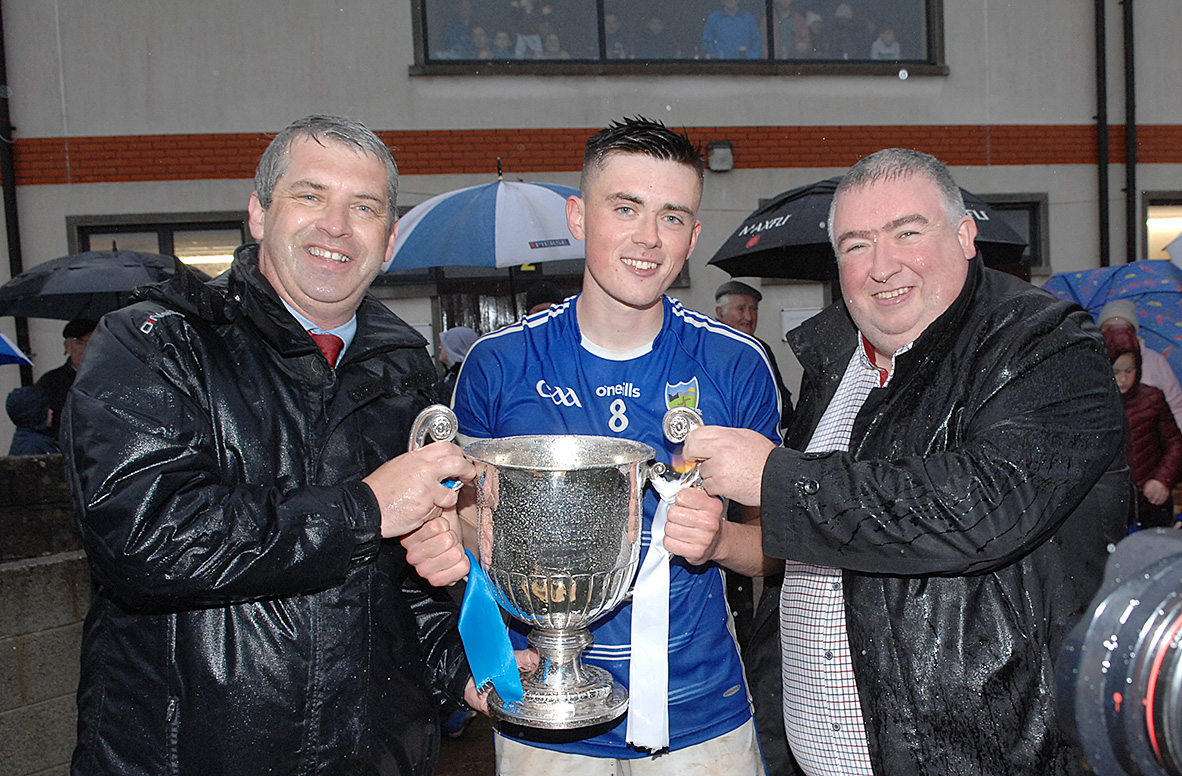 His grandfather, Willie Treacy, was the first successful skipper, accepting the 1953 Second Division Championship, and over the decades to follow McArdle (junior, 1957), Brady (senior, 1958), Mickey Quigley (senior, 1980) and Gerry Craven (intermediate, 1997) would climb steps to embrace with silverware.

After the latter triumph, Roche were genuine Joe Ward contenders, with a young and lethal, left-footed forward among a vast repertoire. The talent in focus, Callaghan, is the last playing remnant of Emmets’ long spell in the lofty reaches of Louth football. How fitting it was, so, that at not a stone’s throw off 40, he is a central reason why their five-term existence in the rut, junior football, is over.

Through the days of relegation and years of struggle, he persevered, but, ultimately, without knowing if this eternal reward would ever come to pass.

“When I first started playing senior football, in the last century!, we’d a good team and got to a couple of (senior) semi-finals; I probably thought that it would happen sooner rather than later, but it obviously didn’t,” Callaghan told The Democrat, while overseeing a spillage of joyous supporters on to The Grove’s leached turf.

“Down through the years, we’ve gone down through the grades, unfortunately. We lost a lot of players and couldn’t get across the line; we strugged with that.

“We had two replays to get here, we rode our luck on a few occasions, but we weren’t beaten and I think that’ll stand to us. We’ve learned the hard way.”

Roche’s greeting of the final whistle was a counter of six days prior, when they trudged off Páirc Clan na Gael like men who had just been dispossessed of their life’s fortune, beaten almost. Glyde, on the opposite side, rejoiced, delighted, if potentially a tad guilty, at the manner of their smash and grab goal to stay alive.

Ollie Flynn’s men believed they couldn’t perform much worse almost a week on, and that was the case, Glyde bringing a more complete and organised display to Castlebellingham. But Roche did likewise and once manoeuvering David Quigley into a sweeping role to prevent Rangers’ direct play to Ciaráin Sheridan, which had yielded early fruit in the form of three points for the No.8, bar a brief sluggish spell early in the second half, Emmets were in the ascendency. 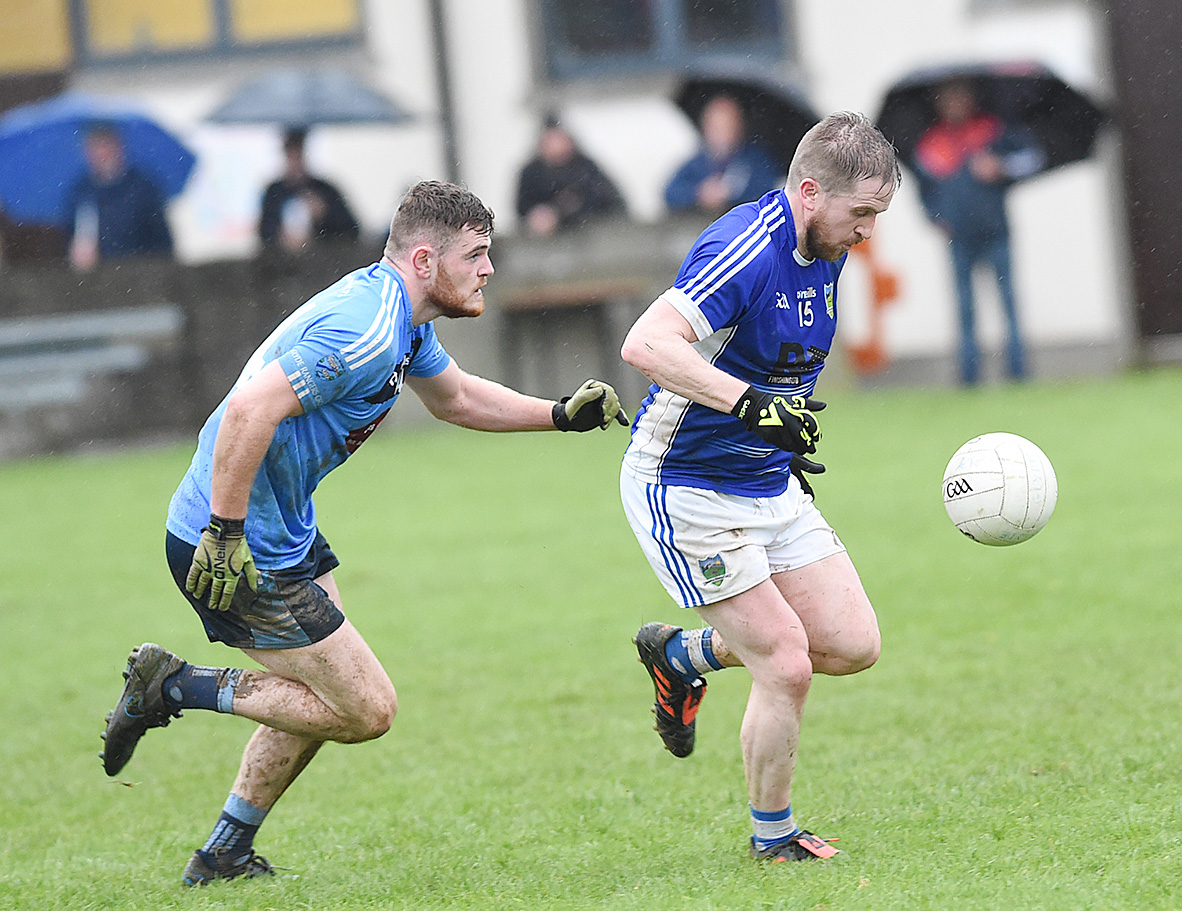 Goals win games, they say, but errors are a significant contributory factor, too. Indeed, the first of Roche’s majors, Shane Byrne’s paint-licker off the crossbar, was a consequence of a Glyde defender fumbling. And with that score in hand, Roche led 1-5 to six at the break, despite the Tallanstown outfit generally accruing more when in the scoring zone, Sheridan and Trevor O’Brien causing the winners issues aplenty.

The decisive three-pointer, from another long-standing warrior, Dan O’Connell, came as Roche craved a swaying intervention, though. Glyde, having shot the second period’s first four points and with Niall Sharkey beginning to dominate, sensed victory, before a flowing move through Barry O’Hare and Glen Stewart ended with O’Connell punching powerfully to the net.

Within seconds, McGuinness’ opting to revert the registrar to full-forward reaped dividends.

“It was a great switch by the management, alright, to move Dan in there,” the former quipped, grinning.

“Dan is a serious unit of a man and if he can win ball in the middle, if there are balls around the goals he can do damage.”

McGuinness added: “We’ve come through two absolute dogfights. Does that show character in a team? You have to say it does. Maybe we made a wee bit of hard work of it, but considering the conditions, I thought we played very well today.”

Glyde lost their bearings thereafter, desperation causing mass misplaced passes and instances they will regret. All Roche had to do was avoid a repeat of the previous Sunday’s implosion. All, they say.

But deja vu is overrated, and they did, at the second time of asking, prevail, holding on amid the playing of six minutes of stoppage time and a few nervy passages.

“Look at the crowd we have here in the weather that’s in it, you see them all in blue jerseys,” Callaghan said.

“It’s good to start moving up the ladder and intermediate football is the most competitive division in the county. We can’t wait for next year, but we’ll park that; it’s all about enjoying this.”