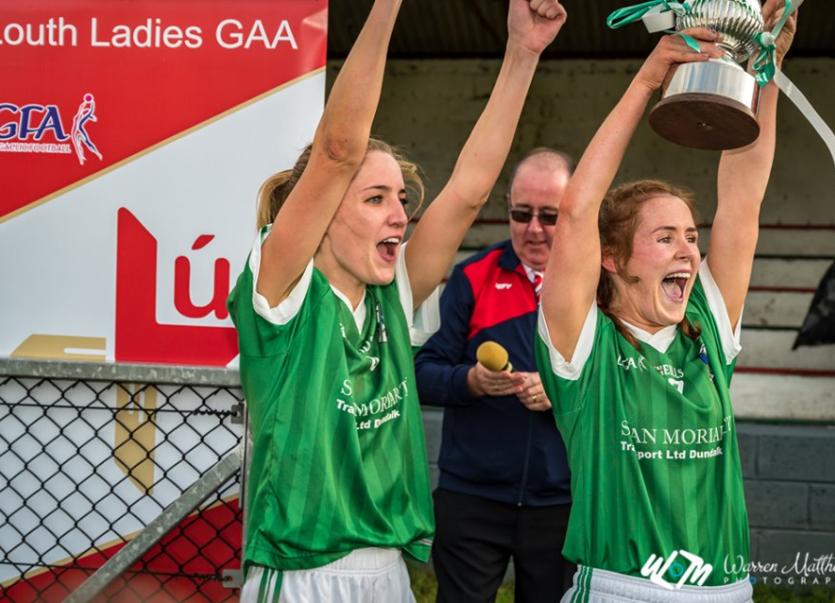 Helen McEneaney, left, will lead her team into the Leinster IFC against Tinahely of Wicklow in the Geraldines on Saturday afternoon. (Pic: Warren Matthews)

Hitting top form in this year’s county final was “really important” for winning Geraldines captain Helen McEneaney, who will lead her team-mates on to the Leinster stage for the first time this weekend.

The girls in green host prolific Wicklow champions Tinahely in Haggardstown on Saturday seeking to arrest Louth’s overall poor recent history on the provincial stage, while maintaining their own unbeaten run this term.

“Not a lot of Louth teams have made a stamp at Leinster, but, looking at our squad and the calibre of players we have, I don’t see any reason why we can’t,” the midfielder told The Democrat.

“When it comes to the county championship, not that you have a lot to lose, but there is a lot on the line, whereas in this, not a lot of teams have done a whole pile at Leinster. At the back of our mind, we’d be lying if we said we don’t want to go for it.”

She added: “We’ve so many young girls coming through and because we’ve a few knocks from the last game, we’re going to have to call on girls that didn’t get to perform on the big day.

“It’s a bonus for us, a big unknown, but we’re going to go out and give it our all. It’s a home game, which is a massive advantage.

“Tinahely is a good two hours away so to hear that it’s going to be at home, we were just delighted. Hopefully we’ll get a bit of support.”

The big day McEneaney, wife of Geraldines and Louth star Jim, alludes to was their recent county final victory over Cooley Kickhams, a triumph which saw them avenge 2018’s loss to the peninsula opposition.

“It’s been unreal,” the No.8 said of the celebrations.

“We’ve been knocking on the door for a while and last year we were absolutely gutted.

“It’s similar to the Gers men. They hadn’t got past the quarter-final stage in the last four attempts and I just think it was a massive hump.

“We’ve had a fantastic season this year; nobody came near us. But that was the same for us last year and going into the final there was a lot of hopes for us and we didn’t perform.

“For me, personally, I was gunning going into this year’s final. I didn’t want us to be the team that, on paper, are the best team, but can’t perform on the big day.