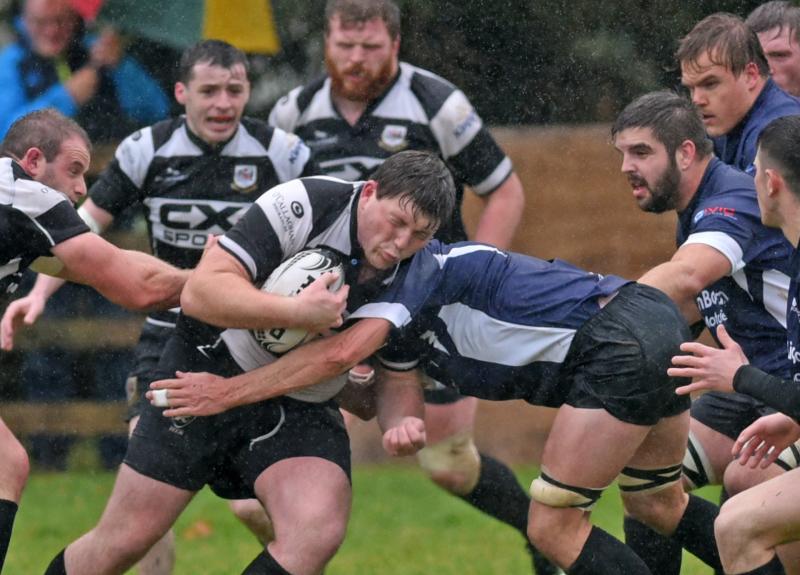 Dundalk RFC's Robert Farrell helped his team past Bective Rangers in Donnybrook on Saturday afternoon for their opening win of the season. (Pic: Ciarán Culligan)

A game in which Dundalk were the better team, and deserving winners, it came in the aftermath of the opening round loss to Ashbourne.

THE GAME
Dundalk started really brightly with lock Eoin Sullivan, making his first-team debut in place of the injured Greg Whately, rising highest in the air to claim the kick-off in putting the hosts under immediate pressure.

Adam Doyle’s side attacked with width and speed, having a number of half-chances during the fast-paced opening before finally making their intensity count, Willie Schutz shooting over a penalty.

Bective responded well to this early setback and had their first possession in the Dundalk 22 after eight minutes. Again, they opted to kick a penalty to tie  the game, 3-3.

From the restart, Dundalk contested and won possession ahead of a dominant 20-minute spell which returned two tries. Their first came off a break down the left wing by Andrew Williams and Patrick Reilly. With the defence stretched, nice handing in the back line saw the ball spread right across the pitch where Ronan Greene enhanced his reputation with a fantastic finish, beating his defender with a nice step and blistering speed. The conversion was missed.

Though Dundalk remained on top, using their pack’s dominance to build a platform that saw Lauren Steen power over the try-line from close range. Albeit the conversion attempt was missed, it was enough to hand the visitors a 13-3 advantage.

The home side rallied somewhat, crossing for a converted try of their own after prizing open Dundalk’s cover, but, undisturbed, the winners went chasing at the other end and James McConnon was on hand to cross the whitewash for a score which, when the extras were added, handed the Mill Road men a 20-10 interval cushion.

An early try moved Bective to within five and as the match progressed, with Dundalk tiring and having to negotiate two 10-minute phases a man less through sin-bins, it appeared as though Rangers were building a head of steam.

However, to their credit, Dundalk refused to buckle, holding the hosts up over the try-line before winning vital turnovers on the 5m line. And all their industry was rewarded when, after a surge down-field, Steen carried to within inches of the line, allowing Gauthier Petit to cross for his first try for the club.

Enda Murphy almost added a fifth major for Dundalk, only to be held up, but a bonus point win in Dublin is an impressive return.