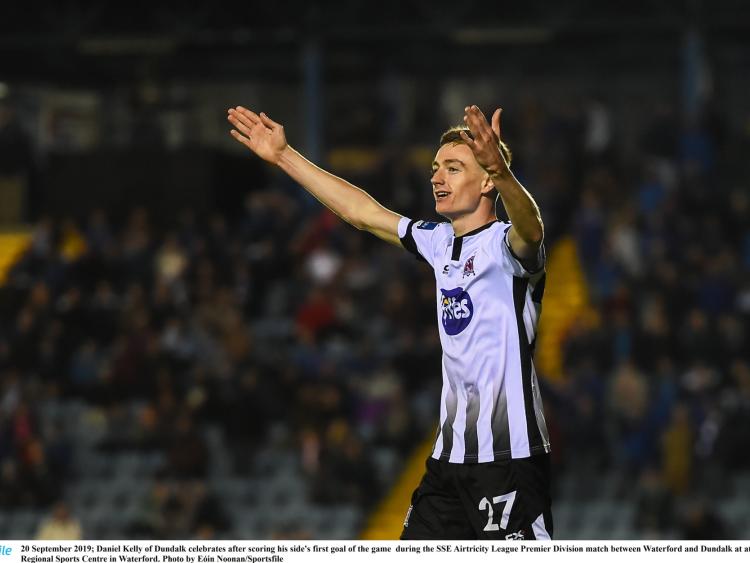 Daniel Kelly celebrates after scoring for Dundalk FC during tonight's victory over Waterford FC at the RSC. (Pic: Sportsfile)

Dundalk FC equalled their club record of 22 league games unbeaten and will be crowned SSE Airtricity League Premier Division champions if they beat Shamrock Rovers on Monday, after Daniel Kelly’s first-half strike was enough to see off Waterford 1-0 at the RSC on Friday night.

Dundalk were slow into stride but, on the back of that, Waterford could not take advantage having made a bright start themselves. Michael O’Connor went closest, but Gary Rogers blocked well to deny his old teammate.

Captain Patrick Hoban tested home goalkeeper Matthew Connor with a long-range free-kick as the league leaders played their way into the game.

Hoban was at the centre of the bizarre breakthrough goal in the 38th minute when the striker closed down defender Rob Slevin, who fell to his knees despite no contact. Hoban took possession and raced into the box before squaring for Kelly to bury his sixth goal against Waterford this season.

It was the winger’s 12th in all competitions but it was the first of his seven league goals that had come on the road. 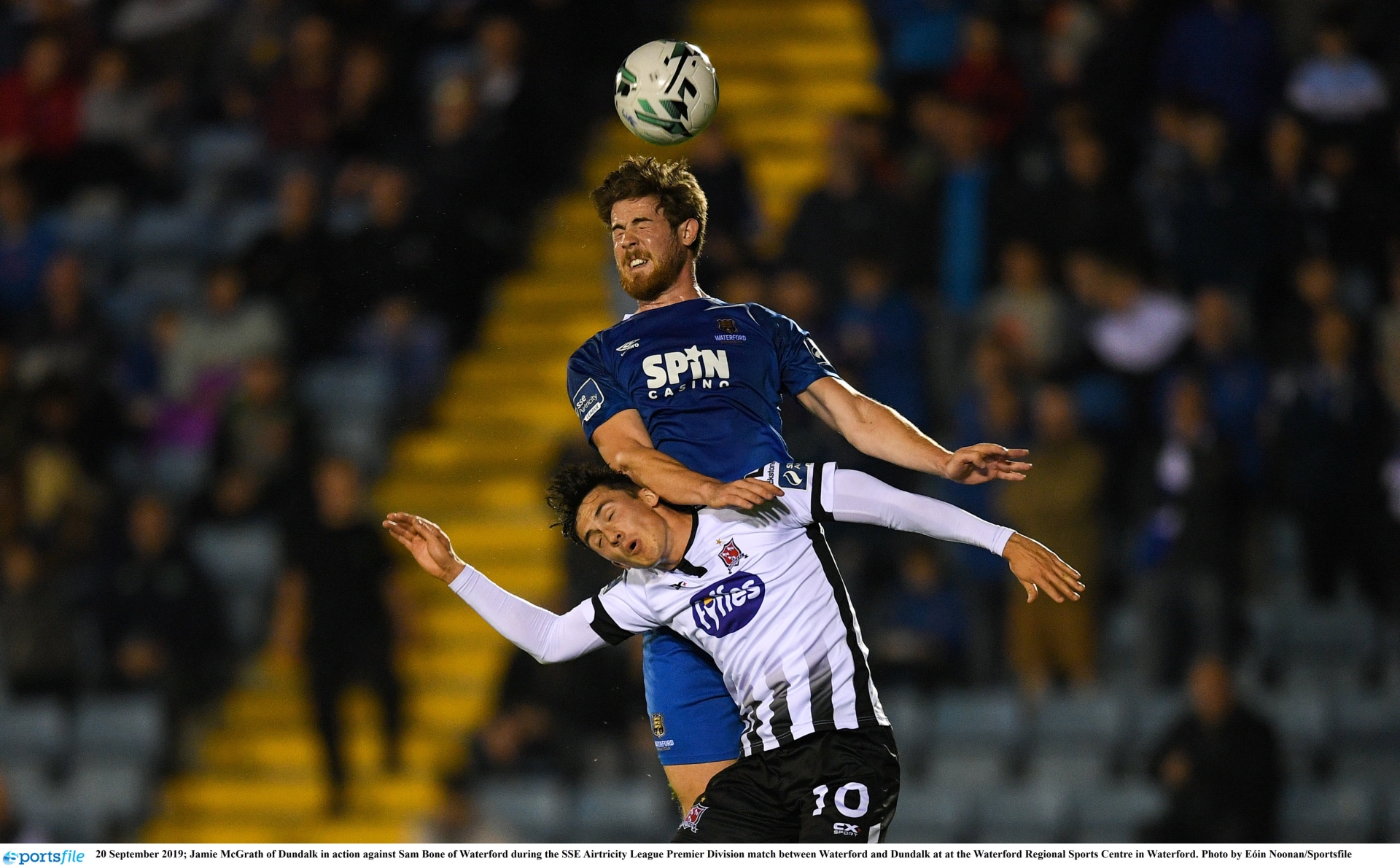 It proved invaluable as a slightly out-of-sorts Dundalk got the job done, to break their in-season record for league games unbeaten which stood at 21 from the 1975/76 season. They can now break their overall record of 22 – also achieved across two seasons in the early ‘90s – by avoiding defeat against Rovers.

The result in Waterford also extended their undefeated domestic record to 28 games, on a night when they made it seven league wins and clean-sheets in a row.

Waterford were without the injured Will Fitzgerald and Kenny Browne, as their boss Alan Reynolds also made four changes from their late win at Bohemians. Fitzgerald, Browne, Maxim Kouogun and Walter Figueira were replaced by JJ Lunney, Cory Galvin, Slevin and O’Connor.

When the teams met in the Extra.ie FAI Cup quarter-final 11 days earlier, Dundalk had killed the tie off by the 33rd minute through a Daniel Kelly hat-trick. This time, Waterford were in determined mood not to give up anything early or easy.

It was Dundalk native O’Connor who almost snatched a 12th-minute lead for the hosts but he could not get enough power on the end of a superb Tom Holland pass to direct the ball beyond Rogers who came out smartly to block.

O’Connor then forced a foul from Daniel Cleary which earned the centre-half a yellow card on the quarter-hour. Waterford were on top, but their failure to make it count on the scoreboard would come back to haunt them. 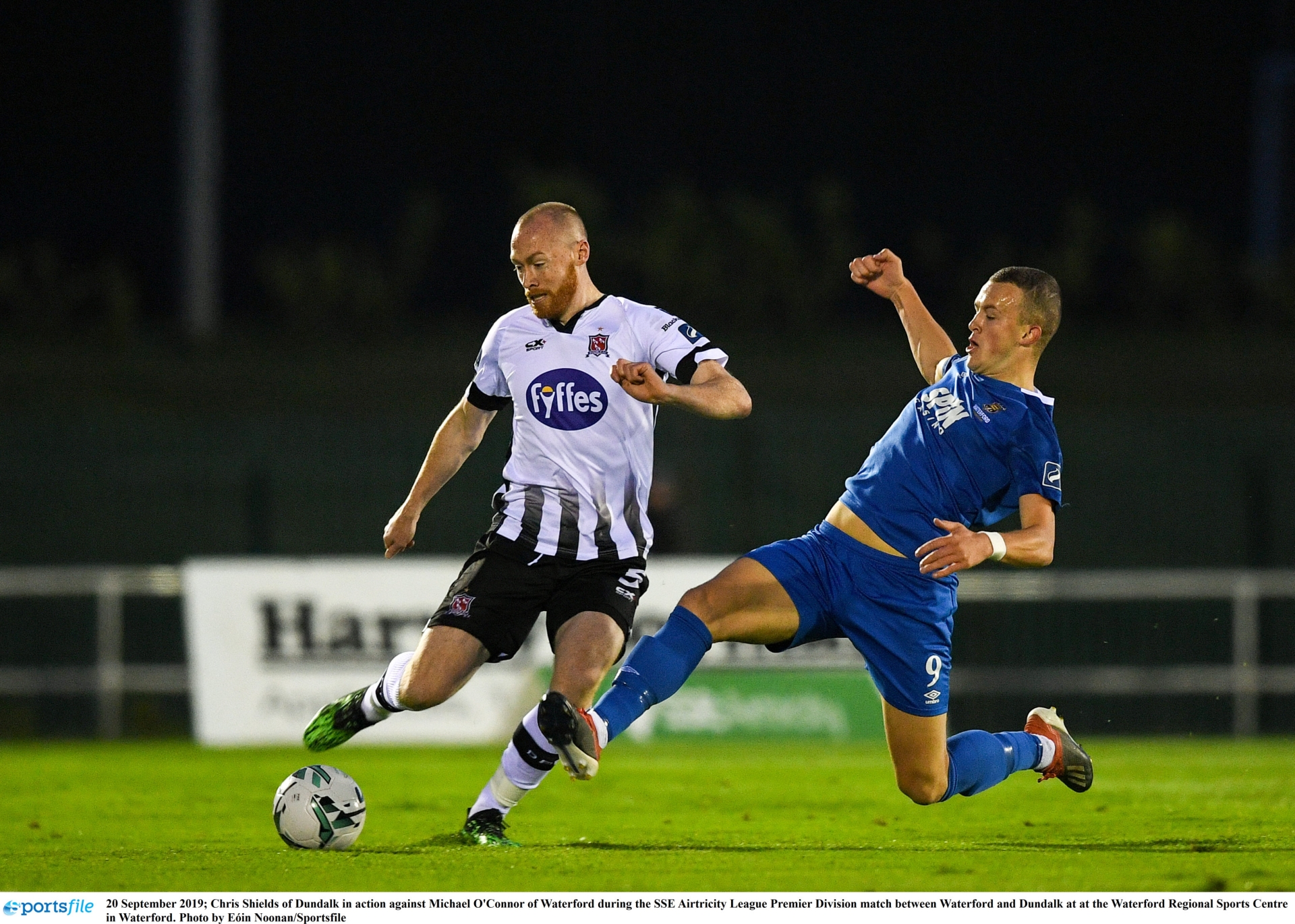 Dundalk were slowly feeling their way into the game and they nearly found a passage through in the 22nd minute as Kelly sent Seán Gannon away on the right but the full-back was adjudged to be offside in a very marginal call.

Hoban then hit a well-struck free-kick from 25 yards which was touched behind by Connor, a save that the officials failed to see as a goal-kick was awarded. The ‘keeper then clawed the ball out of the air after a Kelly strike took a deflection and looped towards the target.

Past the half-hour, the ball fell kindly for Michael Duffy on the left of the area but his rising strike flew over.

The lead goal arrived seven minutes before half-time. Wide on the left, Hoban closed down Slevin who, expecting contact, took a fall. In acres of space, Dundalk’s record scorer took the ball and raced into the box before unselfishly passing to Kelly who fired to the empty net – his first away league goal for the club.

Dundalk started the second half much better as they controlled the game, forcing a number of corners. It was one-way traffic, with Reynolds calling on Figueira and Shane Duggan in an attempt to stem the tide.

Dundalk, though, were relatively comfortable, with Perth bringing McEleney, Seán Murray and Georgie Kelly off the bench in the final quarter-hour.

McEleney threatened a second in the 85th minute but Connor did enough to stop the shot, while at the other end, Duggan’s strike was well held by Rogers. Jarvis then made a vital late block which sealed the three points. 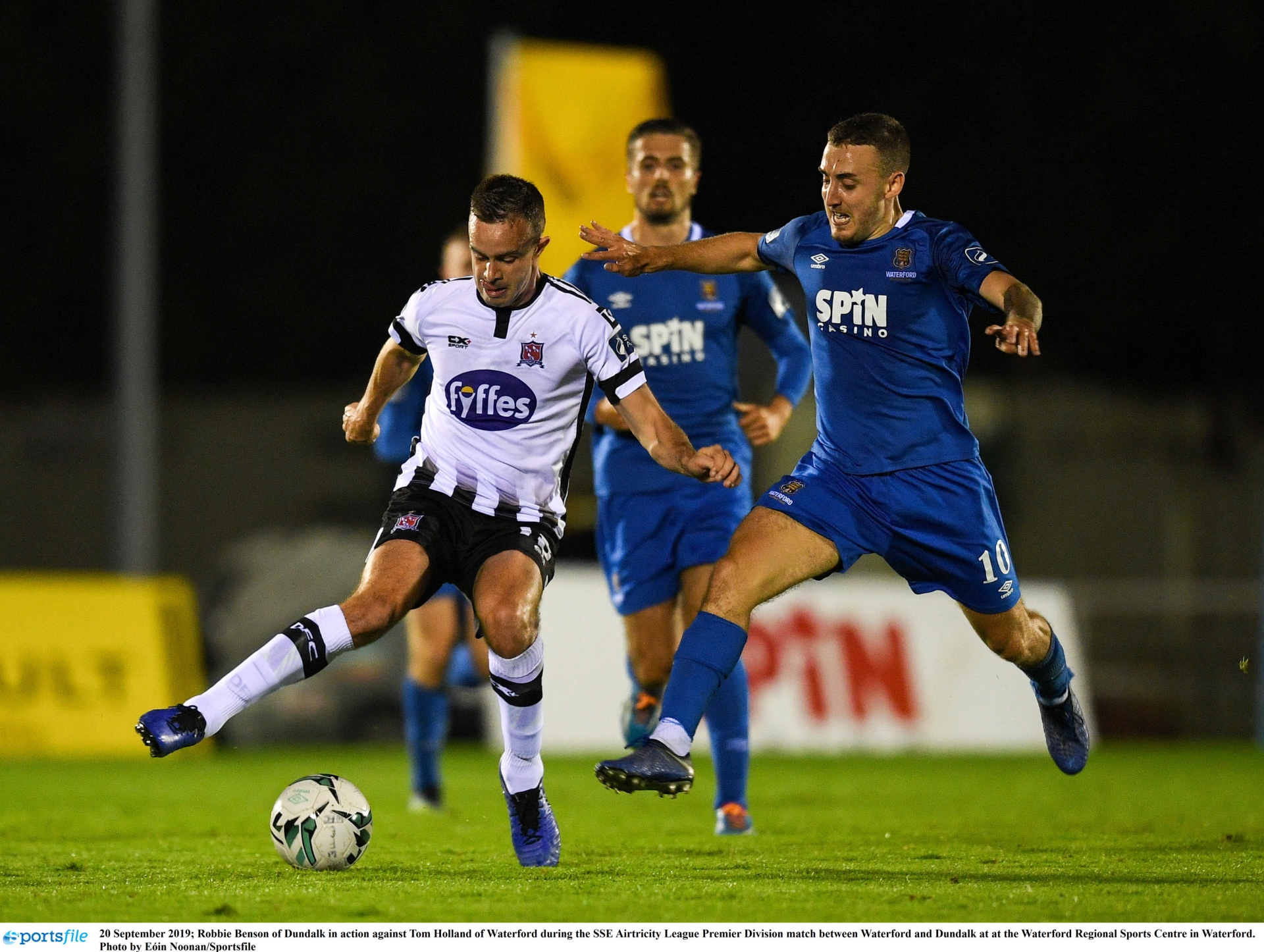 The result completed a clean sweep for Dundalk against Waterford this season with five wins from five between league and FAI Cup, on an aggregate score of 14-1, as attention now turns to Monday’s much-anticipated clash with Rovers at Oriel Park.