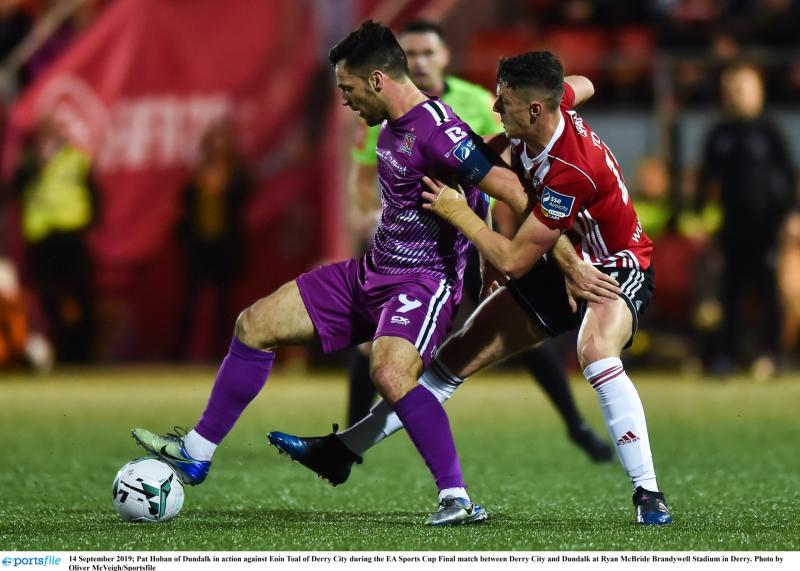 Eir Sport analyst Shane Supple put Patrick Hoban’s season in the perfect context during Saturday night’s League Cup final broadcast, saying: “He had a fantastic season last year. The amount of goals he scored was incredible and people expect a lot from him.

“He probably hasn’t hit the heights that he did last year, but he’s still got 13 league goals as well as other competitions.

“He’s still a threat, a danger and he puts himself about. He’s physically strong, he’ll run all day for you. He’s probably not lightning quick, but he is a threat.”

It seems a bit dim to be talking about Hoban and the uncertainty surrounding his future at the club when Vinny Perth’s men are on the cusp of achieving immortality, but here we are.

The Galway hitman didn’t score at The Brandywell on Saturday night, nor did a clear-cut opportunity ever threaten to fall his way, but his work-rate was - and always is - insatiable.

Your writer recalls a conversation with a former Dundalk player recently, in which they remarked about the difficulties Hoban has to deal with through not only playing as a lone striker in a team which often encounters packed defences, but the fact that, especially in Europe, he must battle isolatedly at times against opponents of international class.

On commentary, Johnny McDonnell spoke of the striker’s relentless chasing and willingness to do the best for his team, whether that be coming short and taking the ball into feet or swivelling to offer The Lilywhites an outlet in behind. You just can’t buy, or teach, that selflessness, or undervalue its worth.

There has been a clamour for Georgie Kelly to get more game-time from the off in matches, perhaps justifiably given his goals ratio in recent months, but with a system that necessitates only one centre-forward, Hoban remains Dundalk’s outstanding option. Although it’s plausible to claim that the former is the league’s second best No.9.

It seems to have been overlooked that despite his perceived poor season on the goal front, the 28-year-old is the Premier Division’s leading scorer on 13, and the indicators point to him holding on to that title for the second successive season.

Con Murphy, the match’s chief narrator on eir, mentioned Hoban’s early-season issues from the penalty spot as he stood up to take Dundalk’s first effort of the shootout, but there was never any doubt that he would stick it away with aplomb - and he did, converting with extreme power and accuracy to the bottom corner.

What more has he to prove, to those handing out contracts at the club and supporters who feel there are better available attackers?

He has smashed every club record there is to almost and, provided he stays fit and remains in the domestic game, it’s not beyond possibility that he could lodge himself among the League of Ireland’s list of great goalscorers, which Finn Harps legend Brendan Bradley presently heads.