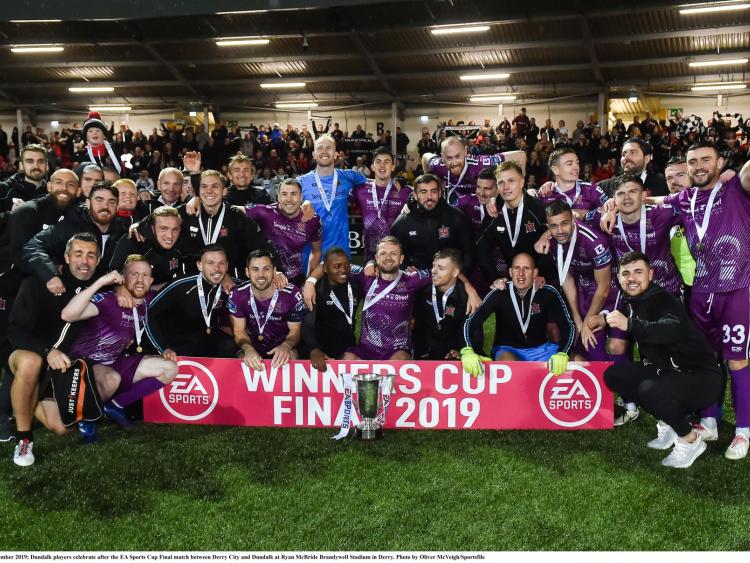 Chris Shields stroked home the decisive penalty after a long and dramatic night in the EA SPORTS Cup final as Dundalk FC bagged the first leg of the domestic treble with a 6-5 shootout win over 10-man Derry City, who twice lost the lead in another 2-2 draw between the sides at the Ryan McBride Brandywell Stadium on Saturday night.

On a wet and windy evening, Dundalk – chasing a seventh success in the competition – were stunned inside just three minutes when David Parkhouse sprung out of the traps to finish a loose ball to the net after Aaron McCarey had spilled Junior Ogedi-Uzokwe’s shot.

Michael Duffy was denied a quick equaliser when his powerful header produced a super Peter Cherrie save.

The Lilywhites beat Derry City 6-5 on penalties, after a 2-2 #EASPORTSCupFinal draw at the Ryan McBride Brandywell.#DERvDUN pic.twitter.com/LlFQPQRY5M

However, there was nothing Cherrie could do about The Lilywhites’ first leveller seven minutes before half-time as Duffy curled a delicious strike to the corner of the net from 20 yards.

Dundalk – who decided to play with the strong breeze in the opening half – were dominant, but they found themselves behind again six minutes after the restart. Dane Massey slipped, allowing Junior space, and his strike took a horrible deflection off Seán Hoare which took it past McCarey.

The game took another twist before the hour-mark when Derry midfielder Grant Gillespie was stupidly sent off after picking up two quick yellow cards. Dundalk’s 26-match unbeaten run domestically was on the line but they equalised once more in the 68th minute when Cherrie failed to hold Duffy’s strike and Seán Gannon nipped in to score.

The 2018 double winners set up camp in Derry territory but the hosts, to their credit, held out well as, for the fourth meeting in succession, the teams finished 2-2 after 90 minutes.

Duffy and Derry substitute Michael McCrudden had chances to be the match-winner at the same end in either half of extra-time, but the destination of the trophy would be decided by the dreaded penalty shootout.

The first four penalties were successful but then Jack Malone fired a wild effort wide to give Dundalk the advantage. However, with the chance to claim the trophy with the final kick, Robbie Benson saw his spot-kick saved by Cherrie. 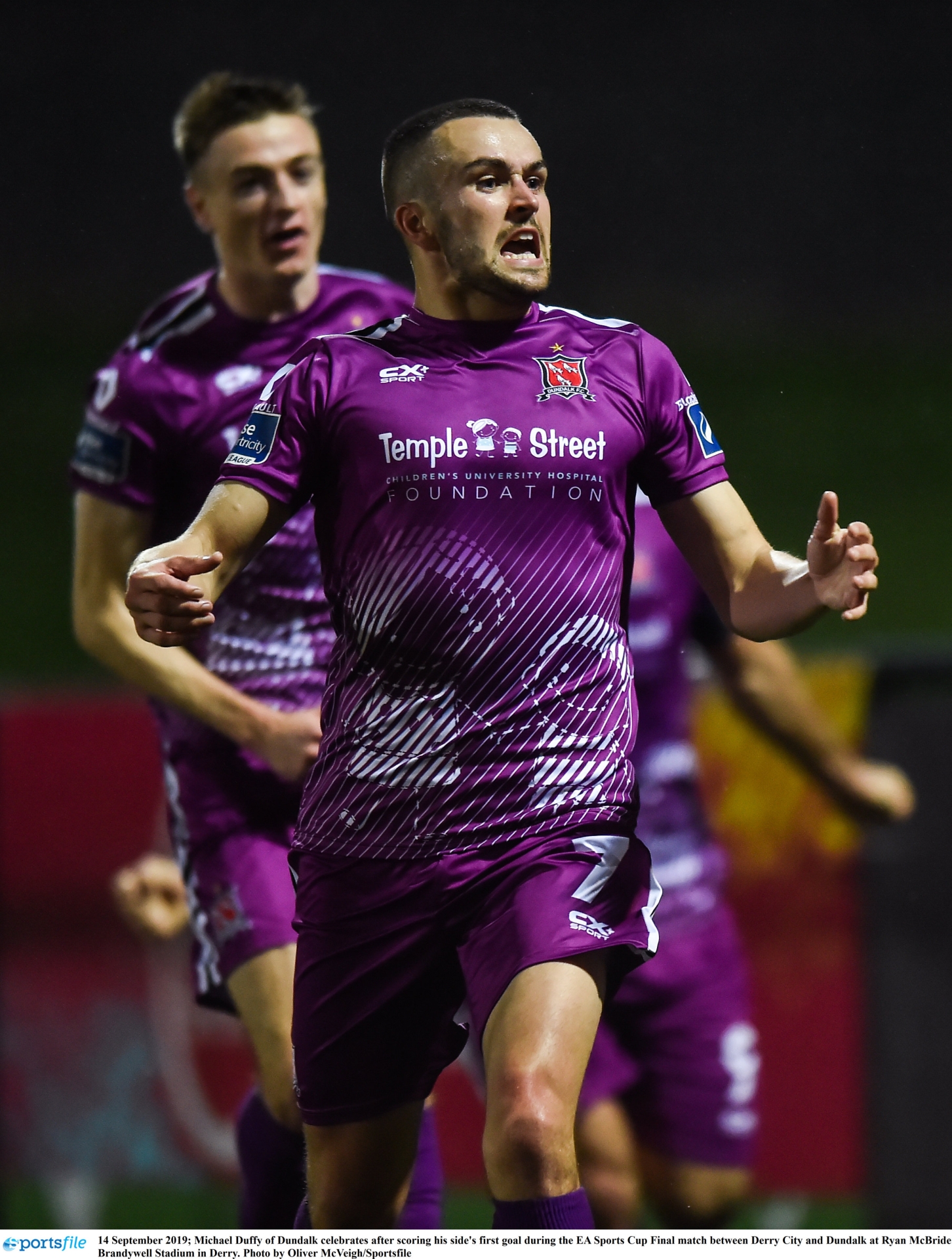 Centre-halves Eoin Toal and Seán Hoare both scored in sudden death, but then Ally Gilchrist struck the woodwork for the holders, leaving the stage clear for Shields to win it.

“I thought, as a team, we deserved to win tonight,” Dundalk head coach Vinny Perth said afterwards. “Obviously, I’m biased, but I thought we were the dominant side. It’s not like us – Derry seem to score against us. Aaron should have saved the first one – the second one was a deflection.

“We were the dominant side. We were probably short on the bench tonight in attacking options and I think it really hurt us. But, listen, this group just keeps going, this bunch of players and staff. We’ve been questioned at different stages and we’ve just ticked one box now.

“We have a lot of work to do. Next weekend, we have two big league games. Unfortunately, we have to focus on that now and we can’t really celebrate tonight. We’ll enjoy the next few hours, but then we’ve got to prepare for a game tomorrow – that’s life and that’s the price of success, I suppose.”

For the final, Perth had kept faith with McCarey, who had started all but one of the team’s cup ties this season.

There were two changes from Monday’s Extra.ie FAI Cup quarter-final win in Waterford, as Gannon and Daniel Cleary returned to the defence in place of Brian Gartland and Cameron Dummigan, as Patrick Hoban took back the captain’s armband. 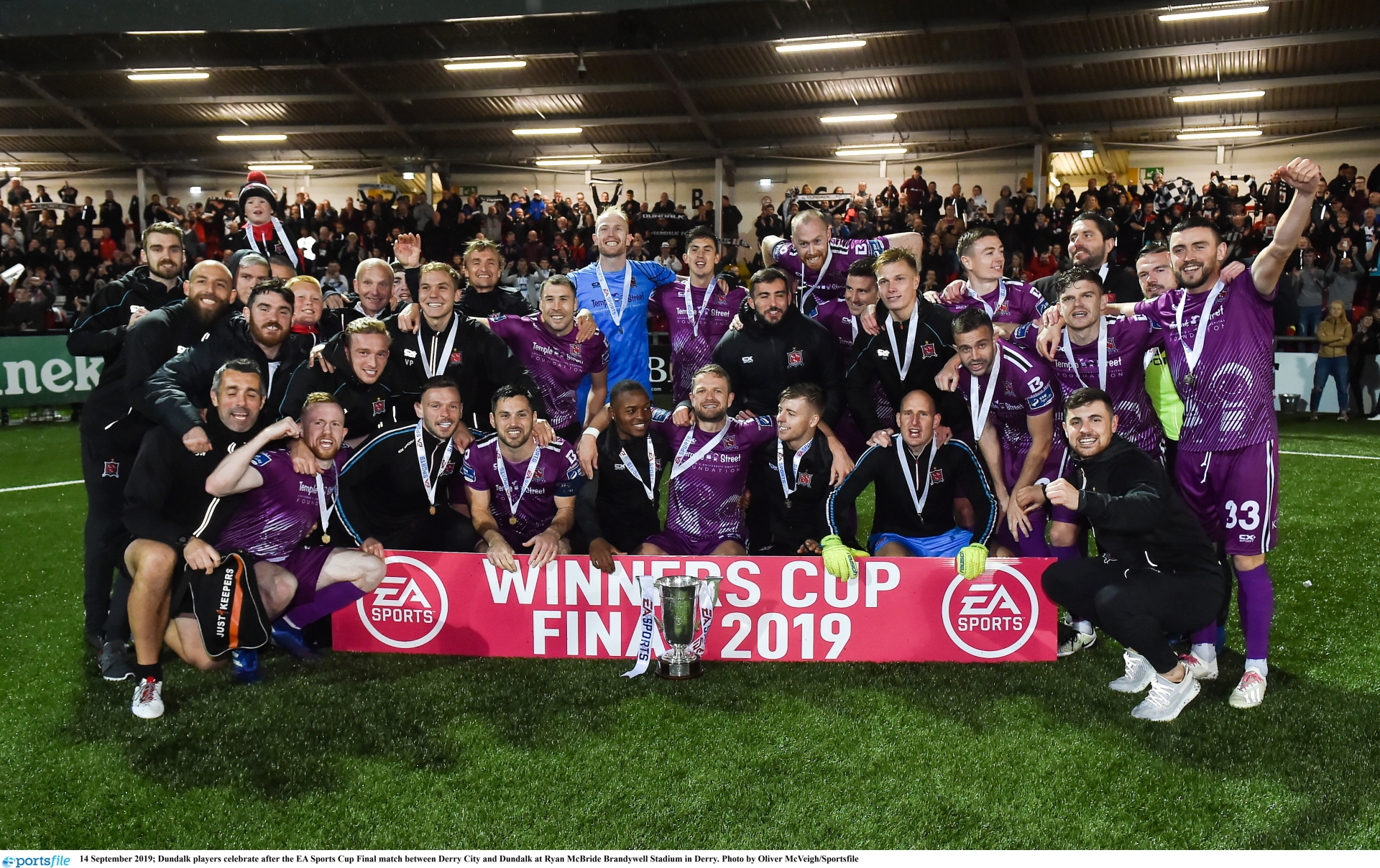 Derry had not been in action for two weeks but that was not long enough for influential midfielder Greg Sloggett to recover from a knock picked up against Dundalk in the FAI Cup. He failed a late fitness test, and was joined on the sidelines by Darren Cole (knee) and Conor Davis (cup tied).

The Candystripes’ last outing had also been at the RSC – a 1-1 draw in the league – and, from that, they made just a single switch as Ciaron Harkin came in for McCrudden, who dropped to the bench.

Their top scorer Parkhouse – who was suspended for last month’s cup clash – led the line, and he broke the deadlock with just over two minutes on the clock. McCarey could not hold Junior’s low shot and the striker reacted quickest to tap in from close range.

Dundalk almost responded in the 11th minute when Jamie McGrath’s fast feet gave him room for a cross from the by-line and he picked out Duffy whose header was met by a strong hand from Cherrie who pushed it over.

The Lilywhites – again wearing their purple kit in support of the Temple Street Foundation – were controlling possession as they probed for a way back into the game. However, Derry threatened a second on 25 minutes when Parkhouse almost directed Harkin’s cross into the top corner.

At the other end, Duffy was given space outside the box but his shot flew off target. Past the half-hour, Hoban’s header from a corner lacked the power to trouble Cherrie who comfortably collected. 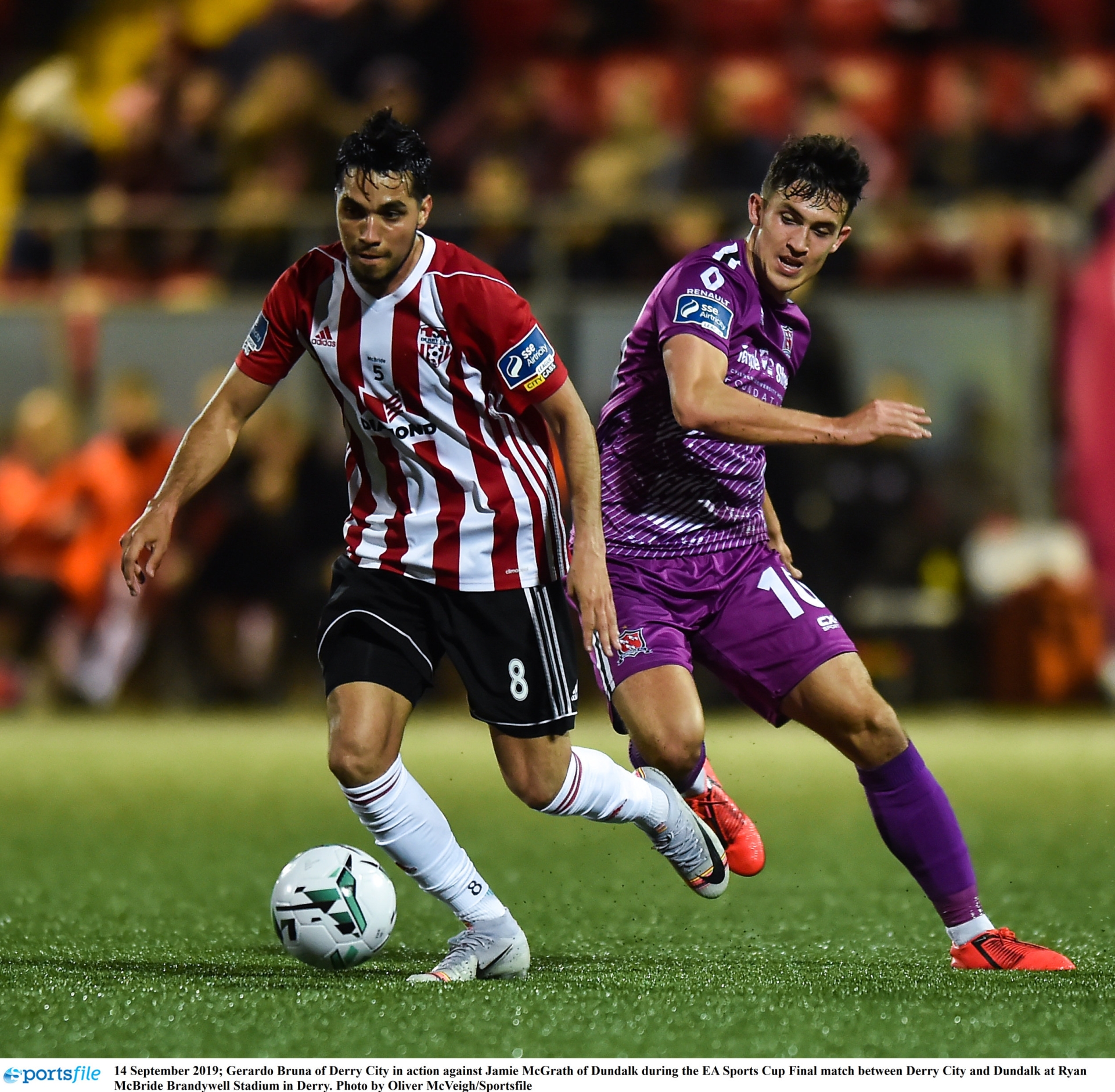 Dundalk were back on level terms with a wonder-goal from Duffy in the 38th minute. McEleney gently rolled a pass into his fellow Derryman’s path and, from outside the area, the winger beautifully curled the ball to the net.

They could well have had the lead at the break but Hoban could not get enough on the end of Gannon’s cross into the centre.

Derry boss Declan Devine brought in Darren McCauley at half-time in place of Gerardo Bruna, who had picked up a knock during a first period where he had also been booked.

The home side hit the front in bizarre circumstances in the 51st minute when Junior took advantage of an unfortunate slip from Massey and his low strike deflected off Hoare to wrongfoot McCarey as it rolled into the net.

Derry’s task became more difficult when Gillespie was shown two yellow cards in the space of four minutes, the first for dissent followed by one for a rash challenge on McGrath.

On 64 minutes, Shields tried his luck from over 25 yards out but Cherrie tipped it over. Benson was then introduced for Daniel Kelly, who had made little impact in the game.

Almost immediately, Dundalk made it 2-2 when Duffy cut in from the left and drove a low shot which Cherrie could only push into the path of Gannon who finished from close in.

Derry were struggling to get out of their half and Devine sacrificed Parkhouse to bring in Malone. They gave Dundalk something to think about towards the end of normal time, with Barry McNamee hitting a free-kick over before Harkin fired straight at McCarey.

Perth threw on Georgie Kelly in the 87th minute, in place of the hard-working McGrath, but Derry did well to see out the 90 and force extra-time.

In the 99th minute, Duffy produced some magic as he burst into the box and cut inside his man before driving a shot that Cherrie got behind well. Dean Jarvis then came off the bench for McEleney.

On 109 minutes, McCrudden got a sight of goal in the box but he struck straight at McCarey, as the tie went the distance.

"They have the quality to get themselves over the line."

That left Dundalk facing the same scenario as in Riga back in July and they once again came out on top, with Hoban, Duffy, Cleary, Jarvis, Hoare and, ultimately, Shields all netting to win 6-5.

Perth said: “It’s brilliant for the group. I’m here seven-and-a-half seasons. We’ve won a lot of trophies. Yes, this one probably falls on my shoulders and it’s probably really special for my family and people close to me, but for me personally, it’s about the group. The group have been marvellous over this year.

“I’ve been challenged and they’ve stood up for me. I have to really thank the group and the club – brilliant owners, brilliant staff and everyone deserves what they get at this club.”

Asked how special this squad of players is, the head coach added: “Time will tell. We’ll let history sort itself out. I don’t like debating eras but they’re certainly putting themselves up there for that argument in terms of who is the best team.

“To be fair to them, they just keep going. We have a game every three days. The last month, 6 weeks, has been driven by our players. It hasn’t been driven by staff. They have constantly come in every day; they’ve been fresh and they’ve been ready to go.

“For me, it’s an honour to be associated with this bunch of players. We’ll keep going, we have a bit of work to do – this is just a small part of what we want to achieve this year.”

With the first leg of the treble now in the bag, Dundalk can add the second with the SSE Airtricity League Premier Division title next weekend if they beat both Waterford at the RSC on Friday and Shamrock Rovers at Oriel Park on Monday.