'My eyes were gone and my face was purple...' - Louth star's battle with epilepsy 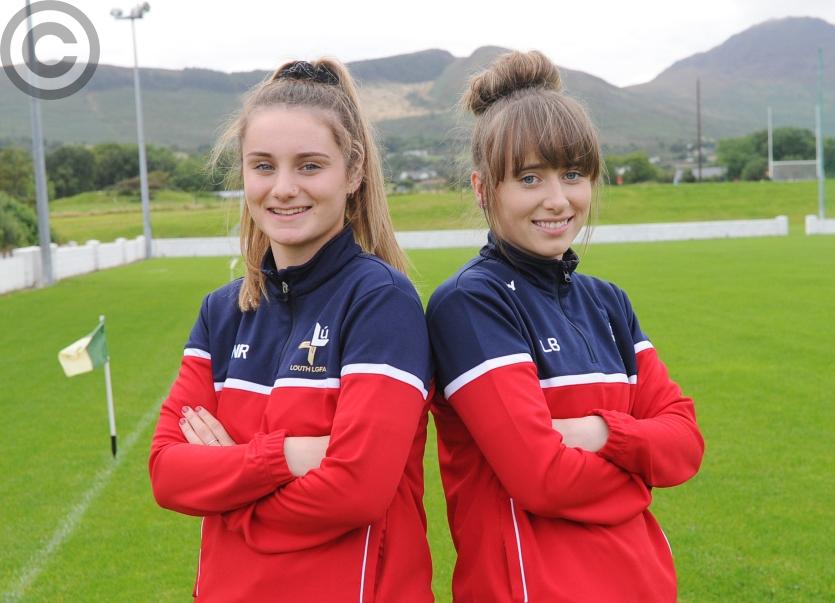 “My eyes were gone and my face was purple,” Lauren Boyle says, edging out from beneath her shell of shyness. “I was making noises and shaking.”

It’s four years since the Louth star suffered her first, and so far worst, epileptic seizure. There had been “wee sensations” previously that she thought nothing of, telling no-one, but this was serious, the then 14-year-old’s mother finding her in the distressed state and calling emergency services.

“It’s a sensation I get in my body and then I can’t feel my right side,” she adds.

“What the doctors think I have is ‘temporal lobe dysplasia’ where the left part of my brain, part of it hasn’t formed properly, so it affects the right side of my body.

“There’s absolutely no telling when it comes. It could be the stress of school or college, during the Leaving Cert, for example, it was pretty shit. 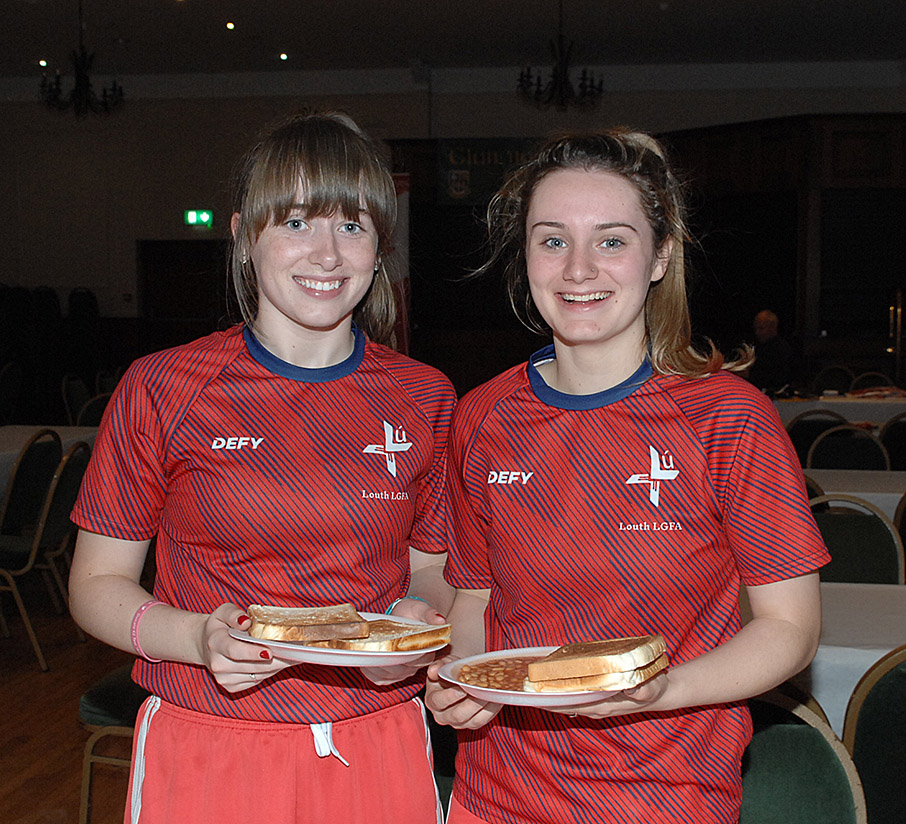 “I could have a seizure today and not have one for a few weeks or I could have one tomorrow, there’s just no knowing. But I don’t let it stop me from doing anything. If I had one before a football game it’s ‘tough, get on with it’. It’d never stop me from playing football.”

Through the worst instances, she would lose her sense of taste, suffer from headaches, balance difficulty and struggle where sleep is concerned. Memory loss is another side-effect. She can’t remember anything from matches through her teens.

Niamh Rice sits motionless amid every excruciating detail, once shifting her gaze from the floor of Cooley Kickhams’ complex, where we’ve met, to her “partner in crime”. The pair are set for their first years at third level, Rice studying agricultural science at Waterford IT and Boyle pursuing a sports course in DkIT. It’ll be the first time they’ve been apart since junior infants.

But through having such a deep relationship there is an understanding of Lauren’s condition. Niamh recognises a seizure’s onset almost straight away, especially when they occur on the pitch.

“Sometimes I look at her and think: ‘You are a bit mental to play on, but she’s as stubborn as her father so she’s not going to be going off the pitch if she doesn’t want to’,” Rice quips.

“It’s weird to watch on the pitch because you see her clenching her fists, just standing there. I’ll go over (dramatic pause), ‘Lauren, are you alright?’. She’d go, ‘yeah, I’m fine, where’s the ball?’.

Via regular consultations with doctors, Boyle has been prescribed medication for life and isn’t allowed to drive until a year-free from seizures of any magnitude. She was even told to scale back playing football, as fatigue and stress are contributory factors to the illness.

Snippets from this week’s pre-All-Ireland final interview with the ‘Cooley twins’, Lauren Boyle and Niamh Rice. The former’s journey, with Niamh by her side, is fairly incredible. pic.twitter.com/7HNCApLJ88

Giggling breaks out as the spinning class instructor from the room above turns up the volume and Lauren, incredibly, begins to pass off her state as “just one of those things”, refusing to allow it to dictate the terms of her life.

“There’s no benefit in life of letting something like that bring you down. It’s something in life that I’ve got to accept and not let it bring me down. I would never allow anyone to make a big deal out of it.”

We’re sitting the night after Cooley’s senior championship semi-final victory over Roche Emmets, the club of your writer. Friendly banter is exchanged throughout the course of the dictaphone’s 48-minute recording, though it’s doubtful if the atmosphere would have been as jovial had the outcome not favoured Rice, Boyle and co.

“You’re always going out on the pitch to win. You’ve got to be ruthless,” says the former, who claims to still be in disbelief at last year’s SFC triumph. Albeit Louth title wins are to Cooley ladies what All-Irelands are to Kerry men - all but expected - the feeling of accomplishing a childhood dream alongside your elder sisters, Eibhlin and Coirin, and closest buddy, Lauren, trumps all.

“I’d always wanted to win a senior club final and when we did I was actually in a state of shock. Still, to this day, I can’t believe it. It’s something you’ve wanted since you were young and you finally get it. It was just incredible.” 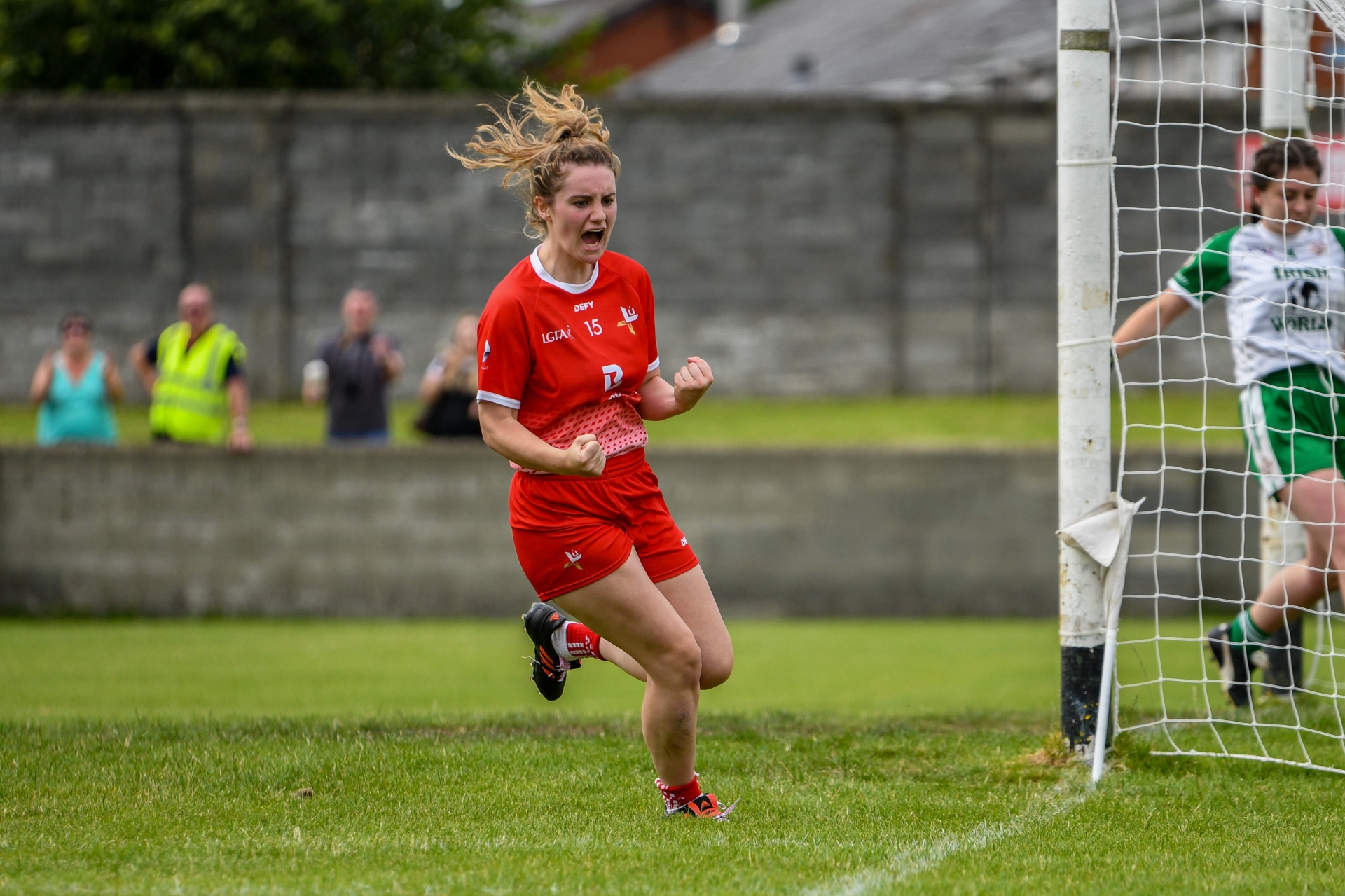 The achievement of a childhood fantasy, vindication for all those days the pair spent at Fr. McEvoy Park kicking points, rehearsing their inimitable styles to perfection. They often tog out the night before Louth matches, making the short spin to the pitch they know every blade of to tone up in advance of battle, visualising greater days in plusher surroundings, like Croke Park, where they’re destined for this weekend.

Last year they played at Jones’ Road in a losing cause before starring on their domestic decider debuts for Cooley. Twelve months on and they’re facing the same situation, a date at Croker preceding the final hurdle of Kickhams’ Louth defence.

While they hope to repeat the feat of one, they’re determined to put the lessons of the other into practice, stomaching the nerves of All-Ireland morning being the primary motive in advance of Sunday. Last year wasn’t a pleasant experience.

Niamh: “I remember running out and feeling like I was on a hill the whole time. I couldn’t believe that I was playing in Croke Park, it was such a weird experience and one that’ll probably stay on my mind forever. That hill definitely got steeper!

“It was very hard to come in at half-time knowing there was just no element of what we’d been playing all year out on the pitch.

“It was probably my and Lauren’s dream from when we were younger to get to Croke Park. I know the result wasn’t ours on the day, but I mean the experience of it for this year is going to stand in our favour. 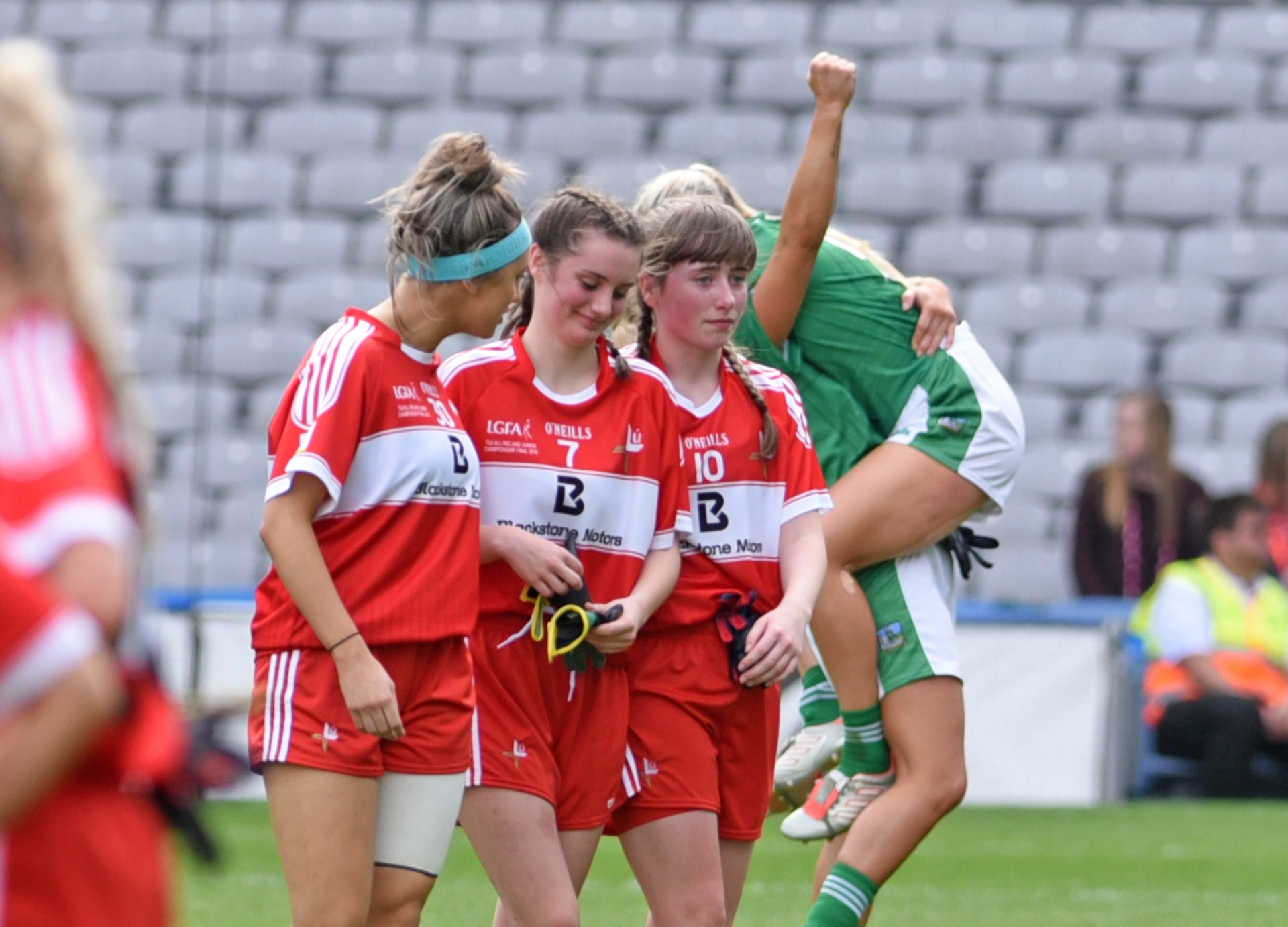 “I think the day completely got to us last year.”

Lauren: “It was the best feeling of my life putting the ball over the bar for the first time in Croke Park. It’s something you’ll never forget. Scoring four points in an All-Ireland final, I think it’s still a good achievement for me.

“But the whole place just seemed 10 times bigger than any other pitch. The stands are so big. It is daunting.”
There really is no preparing for the capacity of GAA HQ, its size and meaning.

“I don’t think you can prepare yourself,” Rice says. “Lots of people have won games on their first experience of Croke Park, but it’s a hard thing to prepare for because your mind is somewhere else. Your first time playing there, you’re taking in your surroundings and wondering ‘how the hell did I end up here?’.” 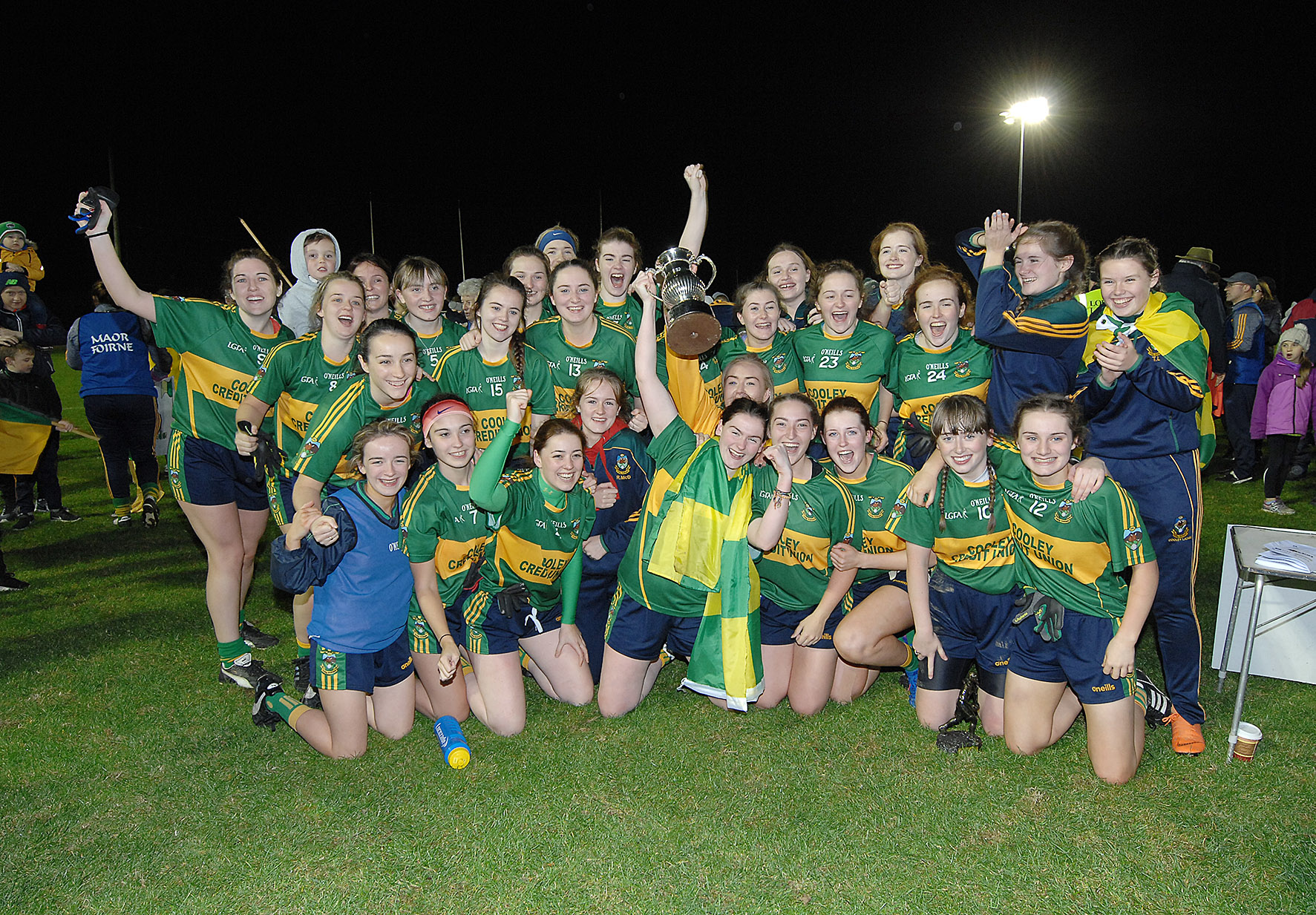 Well, it certainly hasn’t been straight-forward, particularly for Boyle, who suffered what was potentially a season-ending injury in advance of the crucial championship group game against London.

Every campaign has its fair share of pitfalls, but, as Niamh says, you don’t expect “someone to get run over by a forklift”. Left in a plaster cast in the aftermath of an incident which resulted in a machine, weighing several tonnes, driving over and then resting on Boyle’s foot, the fallout was traumatic. The 18-year-old shivers when offering details of her subsequent exchange with dumbfounded manager Darren Bishop.

“He scared me the way he reacted…”

She missed training the night of the accident, in July, leading to Niamh having to contend with various stewards’ inquiries from team-mates as to her location. “She’s otherwise engaged,” being the sentiment returned.

Yet a senior player’s eyes began to bulge in Rice’s direction when the team was named and Lauren wasn’t included. The funny side is upward now, but it certainly wasn’t at the time, she stresses.

The attitude of others is telling, though. The expectation that you won’t see one without the other. Just three months are in their difference age-wise, with Lauren the elder, not that she’s thankful considering it allows Niamh to play another year of minor.

They may be second cousins, but their relationship is more of the sisterhood variety, and that’s the way it’s always been.

“You can’t mess with one and not mess with the other,” Lauren suggests, through a lengthy laugh.

Niamh replies: “My childhood was filled with cycling down to Lauren’s and cycling back up and Lauren doing vice versa.”

Lauren: “She never asked for my permission or anything, she’d just land down, eat her food…

Niamh: “That’s the kind of relationship we had. You didn’t knock on the door! Into the bedroom, ‘get up, we’re going to the shop’.” 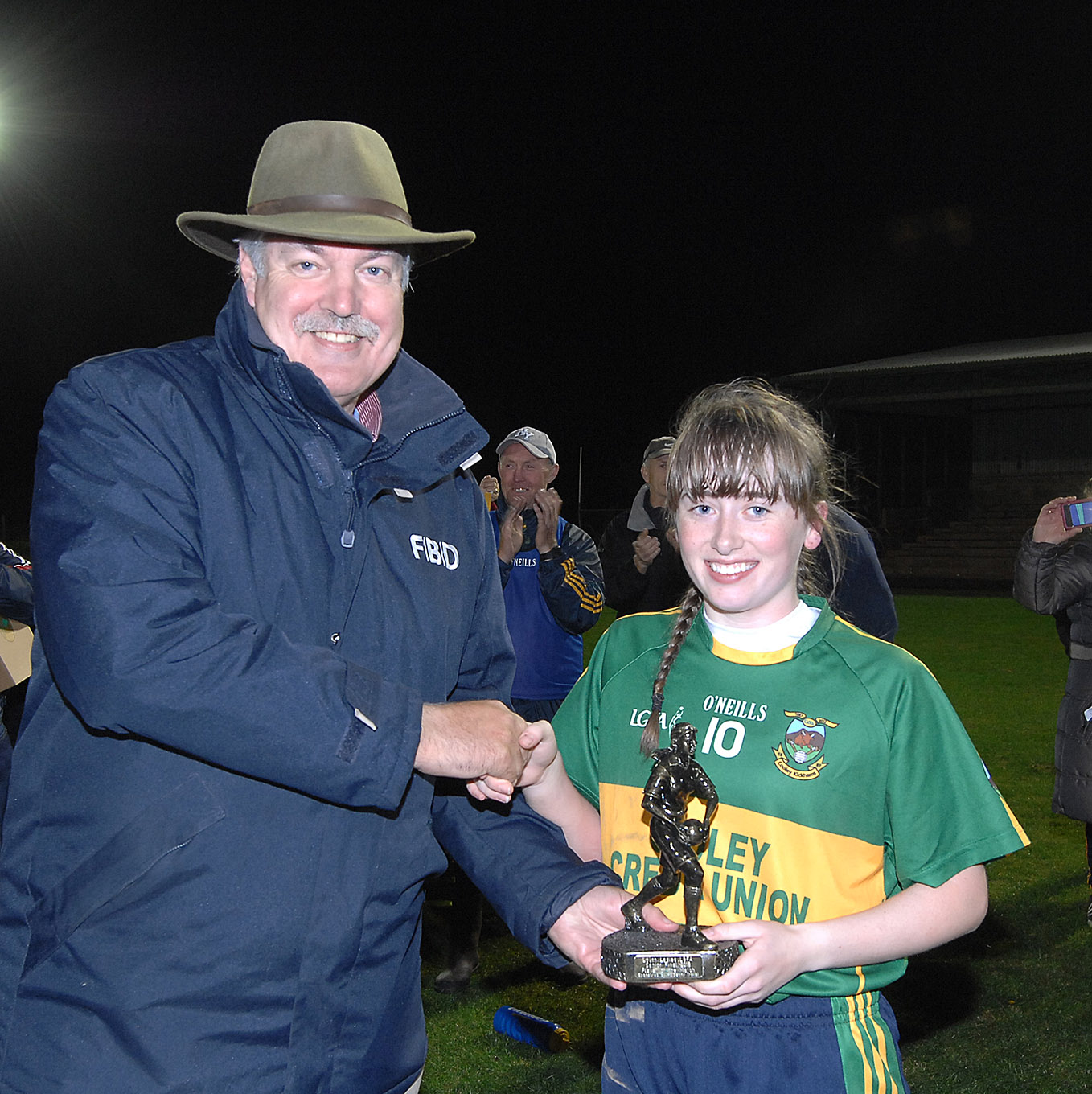 Perhaps it’s their “mutual aggressiveness” which makes them such a good pairing. Both contend to be the moodier off the field, but Lauren wins when it comes to temper swings on it.

Niamh: “Lauren tends to do a bit of, let’s say, grunting… and all she needs is a slap on the back of the head to get her into shape...”

Lauren: “Niamh’s the only one who could come up to me and say: ‘Lauren, shut up and get on with it’. If anyone else did it I’d f**k them off myself…”

There is little else bar football in their lives. In Lauren’s case, “everything revolves around” it, while Niamh does “a bit of gigging” on the rare occasions she’s dispossessed of a ball.

That’s why Sunday is so significant to them and their families, particularly their fathers, Paul (Boyle) and Feilim (Rice), who are ever-presents along the line or in the stand. Generations before them having tasted success with Cooley and they’ve followed suit, but All-Ireland medals are a different motive. They would make them unique within a pantheon of victors.

But it wouldn’t only be winning for the girls, it would be championing together, living the ultimate dream. Bringing the West County Hotel Cup back to Cooley would knit memories of a lifetime and cap an incredible journey for Lauren, with Niamh relentlessly by her side.