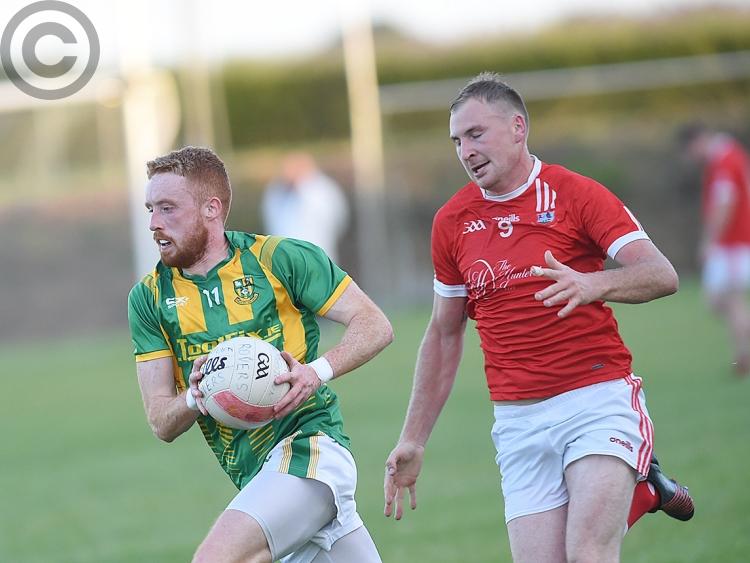 It’s a mystery why Hunterstown Rovers opted to move Ryan Burns off the square. They had the game in their grasp with their fingers gripping, mainly through the Louth man’s exploits.

The Reds’ play was clockwork; a case of win it, turn and deliver to Burns, who found oceans of room whenever he felt like disengaging from the contact of Clan na Gael defenders. Following up his eight points in the drawn encounter with 1-9 in Haggardstown, the sharpshooter was in the form of his life as Rovers appeared set for a semi-final derby against Mattock Rangers.

But their play, which had been so forthright for over 100 minutes of an enthralling tie, lost its previous flow upon the No.13’s withdrawal out the field. Instead, Hunterstown became an entity more prone to purposelessly shifting the ball laterally, allowing Clans to set, turnover and break.

And that’s when Mark McCann’s men are at their most dangerous. Albeit Billy Smith wasn’t as dominant as in previous rounds, his 1-4 was crucial to his team’s hopes remaining alive. Mark McGeown and Conall McKeever came to the fore with their side in need, but the sources of much of their late play were unlikely. Mark Newell and substitute Reece O’Hanlon were outstanding.

The former added to the goal he hit in the drawn affair with four points on Saturday night, three of which came as Clans powered for home, while young O’Hanlon was never off the ball following his introduction. Unflusterable when minding possession, he kicked the 17th of Clans’ points to edge them over the line.

But doing just enough has been a focal trait of his club at this grade over many years. The Ecco Road men don’t seem to lose quarter- or semi-finals, their problems lying in either progressing from the group or in deciders themselves, and don’t Rovers only know it.

It’s the third occasion in five seasons that Hunterstown have bowed out to the town natives. The last time, in 2017, the Dundalk side subsequently sent Mattock tumbling to defeat. How they would take a repeat occurrence from Friday night’s tussle in Stabannon.

Though, regardless of how admirable Clans were in coming back, Hunterstown lost this game above all else. Burns’ transfer to the middle sector simply played into the winners’ hands.

Rovers were three clear at the break, 1-7 to 1-4, following a half in which they were evidently the dominant competitor. Despite trailing 1-1 to no-score early on, they responded with Burns’ looping goal giving Peter Dooley’s charges the lead.

Clans went back in front for a time, but Hunterstown hit the final four points and the gap was five when Burns struck over twice on the restart.

Jason Cullen sparked a Clans revival with 0-2 either side of a Smith effort, though Rovers remained fairly comfortably in front until Burns’ reversion, at which juncture the tide visibly began to turn.

Following the Hunterstown star’s eighth point, Clans hit five on the trot to go two in front, before the final scores were shared. There was drama at the death when Rovers were awarded a close-in free, referee Jonathan Conlon blowing before a player in red drove to the net, and while Burns’ shot was powerful there was no way by Clans’ packed goalline.