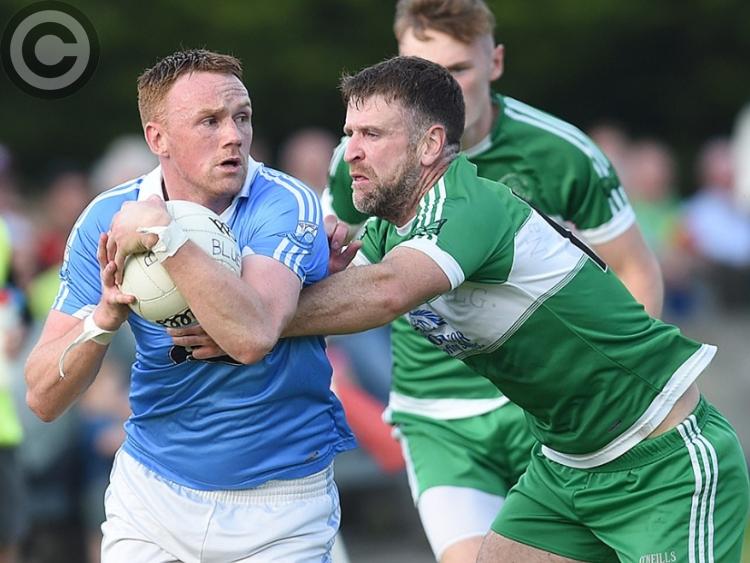 Alan Connor took a bolt forward as Newtown Blues broke away during the first half of Sunday night’s quarter-final in Castlebellingham, finding himself in the right corner-forward position by the time the ball reached him.

He gathered, taking his time to assess, and laid off in providing the assist for one of Blues’ seven opening period points. Wearing No.4 and in Sky Blue, Connor may as well have been Philly McMahon. Blues may as well be Dublin. They’re just so dominant.

Their supremacy made for brutal viewing, Pat’s being subjected to a long and arduous demise as Blues sauntered from end-to-end with clinical efficiency. Ronan Phillips’ champions are unflappable in everything they do, all cogs in a refined system being absolutely confident and capable in possession.

Take captain Emmet Carolan as an example. A defender by trade, and Louth’s full-back, the centre-half strolled forward on the brow of the break to pick out the top corner from the penalty spot. It was the type of finish Manchester United would pay millions for.

Pat’s did their best and can claim to have led in the early stages, when Aidan McCann’s flicked goal was followed by Cathal Grogan’s free, giving them a 1-1 to three-point cushion, but their next score would be almost a half an hour in waiting.

In which time Blues lethally tip-toed clear - they’re far too elegant to rampage! - with Ross Nally and Ciarán Downey rifling to the net ahead of Carolan’s cultured spot-kick conversion. Up 3-6 to 1-1 at the interval, what could Blues have said in the dressing room? What could Pat’s manager Paddy White say either? There was nothing to debate. The game was as dead as the proverbial dodo.

The second half was dour and played in friendly-like conditions, the type of situation which lends itself to youngsters finding their way into the manly ranks. Thus it was an ideal environment for Dáire Nally, Ross’ younger brother, to increase his profile, and he did, kicking the point of the encounter from way out.

So unremarkable was the second half that the effort stood out as if illuminant.

As the nation asks itself how Kerry are going to deny the Dubs, Louth Gaels are left with a similar ponderable. Blues, are they really unstoppable?