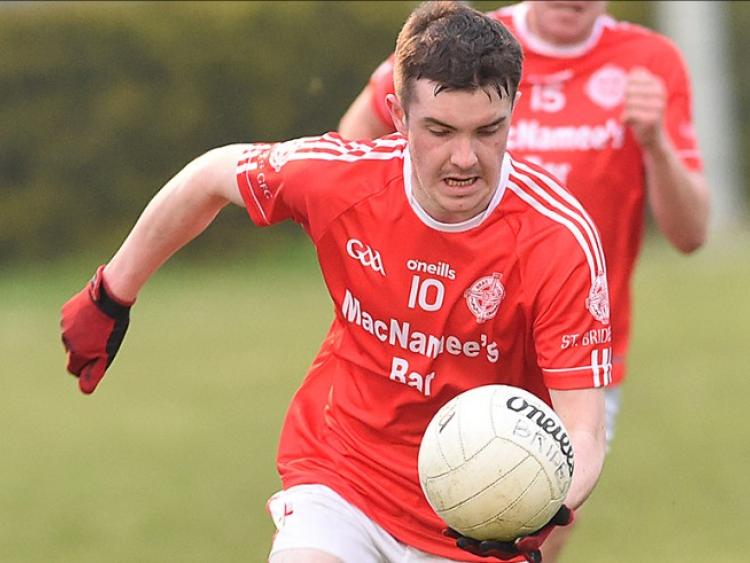 Considering St. Bride’s waited five years to breach the IFC quarter-final hurdle, the Gods were unlikely to make it plain sailing for them, now, were they?

Shortly after 8:30pm on Saturday night the Knockbridge men and their followers began to break into a fresh sweat. Their bowels may well have been slippery as they watched through a grate of fingers.

Six points up a minute into stoppage time, the gap was suddenly back to just one and relentless St. Fechin’s were coming down the field. A draw was written all over it.

But Alan Dunne’s claw was the game-saver, possibly even a season-salvager. The corner-back nipped in just ahead of Niall Devlin on the right-wing to gather and when the ball was transferred to Patrick Reilly, referee Paul Kneel blew sternly on his whistle, a noise drowned out by the joyous cry from the winners’ ranks. Had Devlin taken possession the next step seemed but a formality with the forward in lethal form.

Perhaps this was how it ought to have been, though. Winning knockout championship matches is no easy feat, as Bride’s know only too well following surprise exits to Naomh Fionnbarra and St. Mochta’s over the past two years. They arrived in Dunleer as overwhelming underdogs, but left with title favouritism stitched to their breast pockets.

That’s the nature of do or die football at the height of the campaign. A season can change in 60 minutes. It can end, too, as Fechin’s now know. In fairness, the Hoops, beaten finalists 12 months ago, died with their boots on.

To be missing a Louth forward, Eoghan Duffy (suspension), and lose another, Ronan Holcroft, to injury after only seven minutes, with midfielder Paul Matthews also having to retire, and still be in contention puts weight behind many people’s notion that Fechin’s are the strongest team at this grade. Not that it matters now.

Bride’s got goals at crucial stages, strikes which acted as a kick to the gut of Fechin’s. Andrew Smyth, whose placing at centre-forward kept Bevan Duffy on his toes, got the first early on, while teenager Neil Thornton devoured the roof of the net shortly after half-time to deflate Fechins’ stong post-interval spurt, where the Devlins, Brian and Niall, were supreme.

Seán Marry’s four late points then had Bride’s in control, but they juggled with the ascendency as Fechin’s threatened a miracle. ‘Surely they couldn’t’ being the sentiment as the exit-bound swivelled. They couldn’t, though they weren’t far shy.

Simply, the game of the championship thus far.