Chastening night for Dundalk FC as Lilywhites bow out of Europe 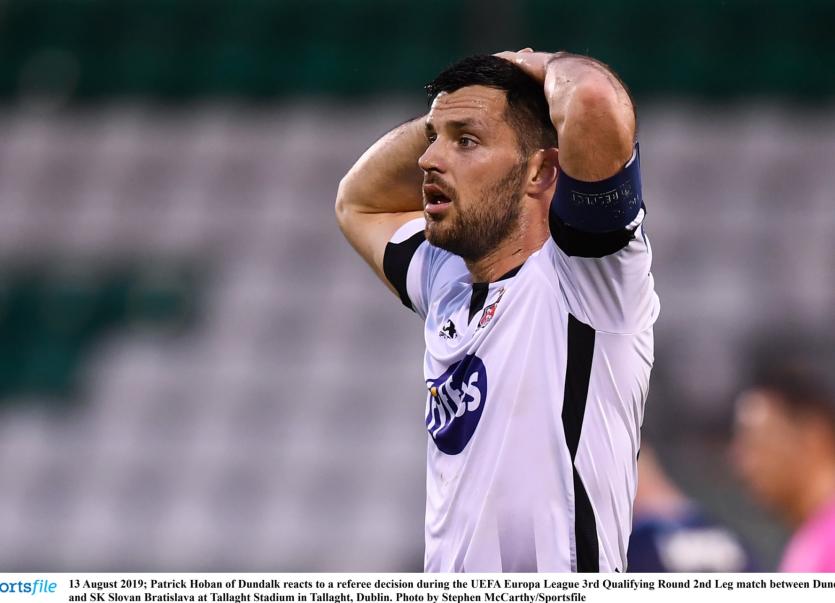 Dundalk FC never showed up in the first half as Slovan Bratislava cruised through to the UEFA Europa League play-off round with a 4-1 aggregate win, after quickly putting the tie to bed at Tallaght Stadium on Tuesday night.

The Irish champions did almost wipe out Slovan’s 1-0 first leg lead in the opening minute, but Jamie McGrath’s sweet volley was turned away by Dominik Greif.

A promising start, but that, really, was as good as it got for The Lilywhites. After surviving a scare as Andy Boyle cleared off the line in the fifth minute, they trailed by the quarter-hour through Rafael Ratão’s diving header – a crucial away goal.

Dundalk were desperate for a lifeline, but Slovan always looked likely to score a second and it duly arrived in the 33rd minute. Boyle and Gary Rogers got their wires crossed and Aleksandar Čavrić stole in to kill the tie.

The League of Ireland table toppers had the better of the second half as Slovan sat in, and they grabbed a consolation 20 minutes from time when Michael Duffy fired past Greif.

Duffy then won a penalty when his shot was blocked by the arm of Myenty Abena, but captain Patrick Hoban saw his penalty saved by Greif, who, it must be said, was a frustrating figure for Dundalk over the two legs.

Slovan then put the icing on their cake in injury-time when substitute Erik Daniel rattled in another. 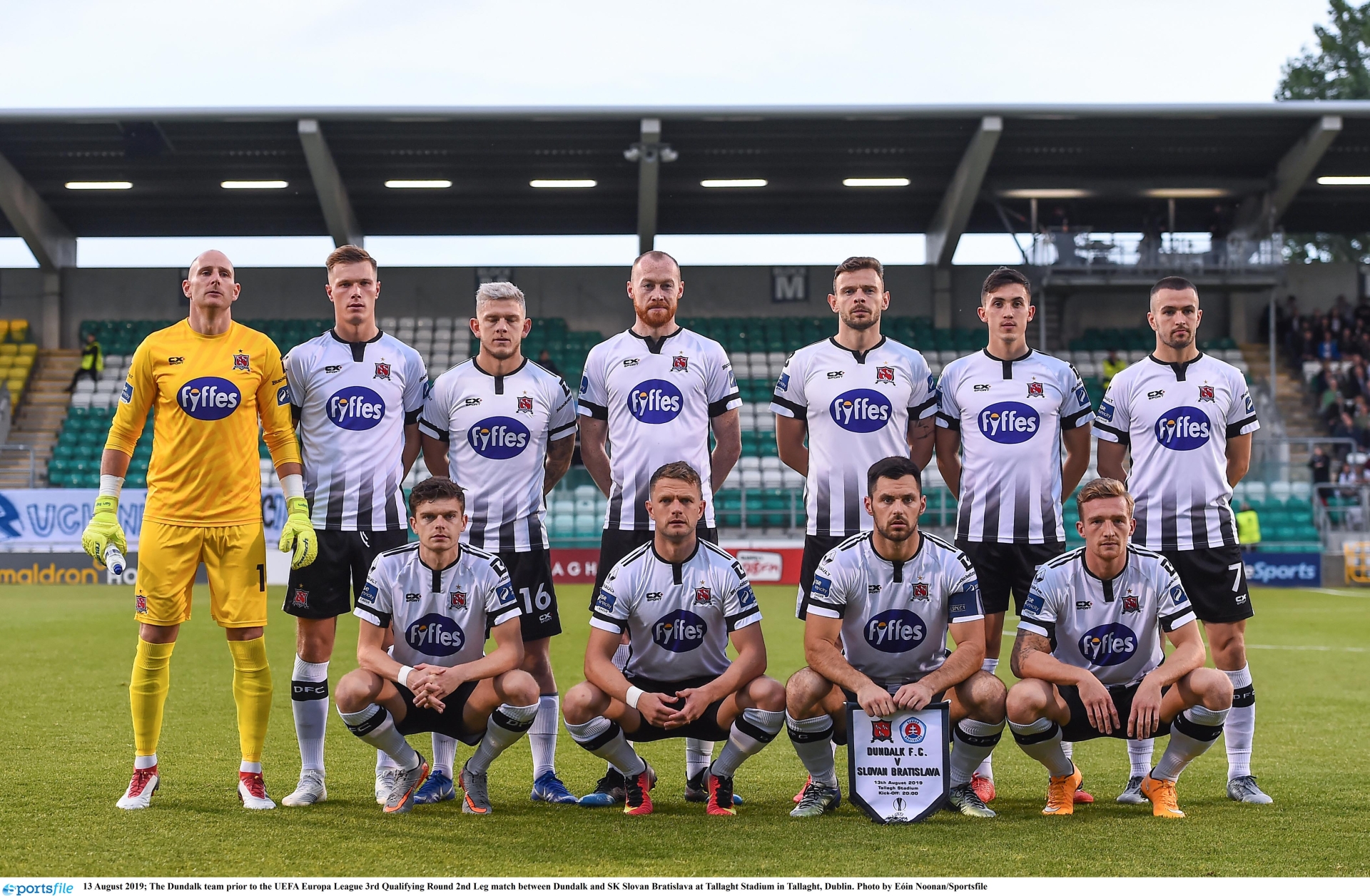 Lilywhites head coach Vinny Perth had named an unchanged team from the first leg in Slovakia, with centre-half Daniel Cleary and winger John Mountney retaining their places having also started in the Extra.ie FAI Cup win at Cobh Ramblers on Saturday.

Slovan boss Ján Kozák, meanwhile, made one change to his team from the first leg as Čavrić – a late substitute in that narrow win – replaced wide-man Moha Rharsalla, who had been lively for most of the clash in Bratislava.

Dundalk were close to a dream start when McGrath fired a volley from the edge of the box but goalkeeper Greif got across smartly to push it clear.

They then survived a big scare on five minutes when Rogers came out to block Andraž Šporar only for the ball to break to Dávid Holman whose strike was cleared off the line by Boyle.

Moments later, Čavrić fed Marin Ljubičić who fired a shot down the throat of Rogers from outside the box.

Dundalk failed to heed those warnings and Slovan broke the deadlock in the 12th minute after poor defending by the hosts. Šporar delivered from deep on the right to the back post where the free Rafael Ratão sent a diving header to the far corner of the net.

Perth’s players tried to respond and Duffy had a shot deflected behind before Cleary headed over. But they escaped once more in the 17th minute when Holman whistled inches past the post from 20 yards.

There was more trouble for Dundalk moments later when Slovan had men over, but they had a huge let-off as Holman’s through-ball had too much weight on it. 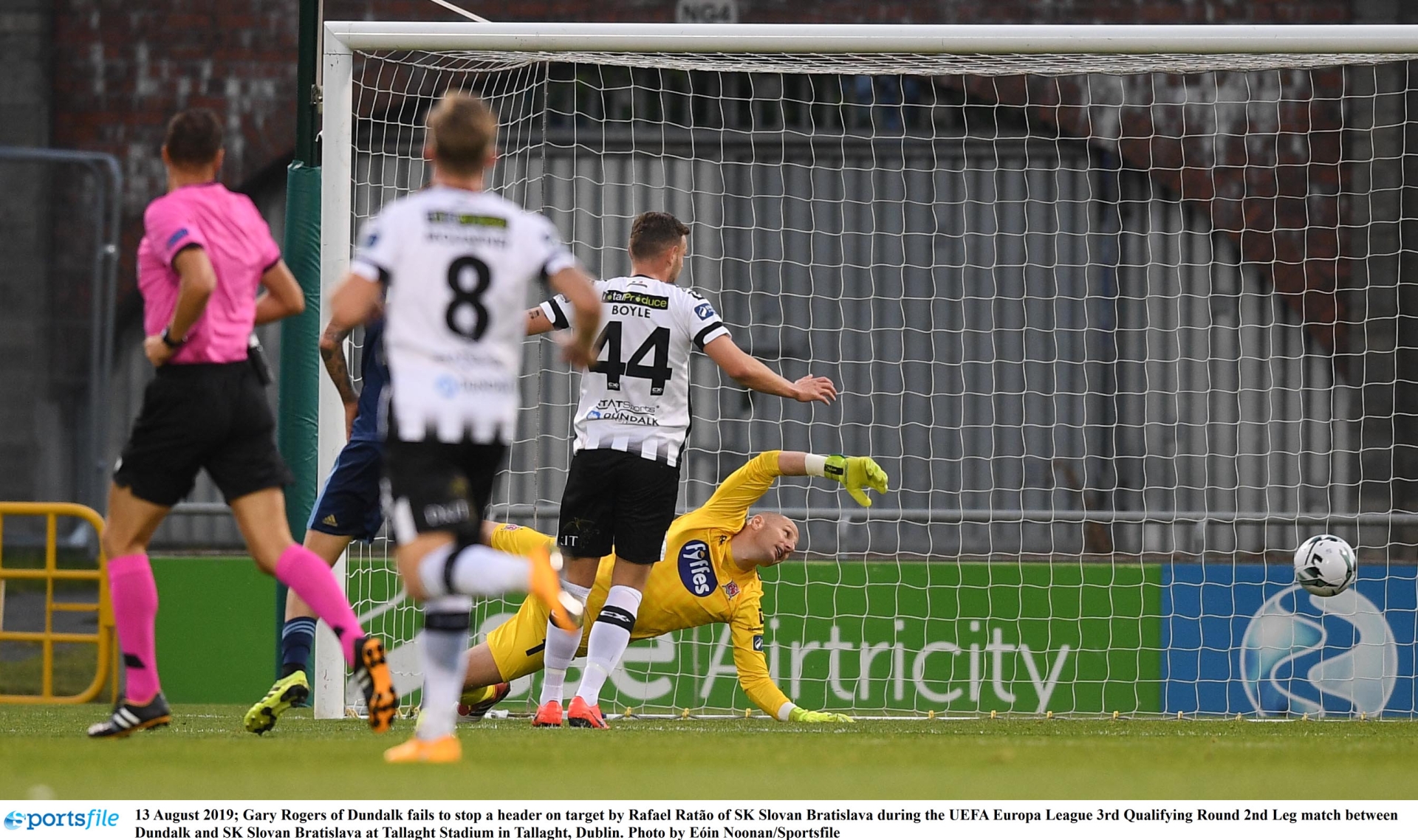 In a lively game, Seán Murray’s corner midway through the half was knocked back across goal into the path of Hoban whose effort was blocked by a packed Slovan defence. Greif then pushed away a Chris Shields shot.

On the half-hour, as Dundalk desperately searched for a way back into the tie, Dane Massey set Murray in the box but his effort curled the wrong side of the upright.

Disaster struck again on 33 minutes as Slovan completely killed off the tie when a mix-up between Boyle and Rogers on the edge of the area allowed Čavrić to nip in and lift the ball to the net.

Mountney then thundered a 20-yard central free-kick which Greif did well to turn away from danger. But it was all Slovan. They were a constant threat and Holman threatened again – however, at the back post, he could only direct the ball over the target.

At the break, Perth introduced Patrick McEleney and Seán Hoare in place of Murray and Cleary, and Dundalk upped the pressure approaching the hour-mark.

Slovan were happy to hold what they had, but Dundalk nearly pulled one back in it in the 58th minute when Shields’ cross was headed goalwards by Hoban but Greif pushed it away. Hoare then saw his curling shot pushed behind by the ‘keeper, before Mountney was just denied at the front post.

Dundalk reduced the deficit in the 70th minute when Massey laid the ball off for Duffy who fired in from just inside the area.

It should have been 2-2 on the night moments later. McEleney’s initial shot was brilliantly stopped by Greif but Duffy’s follow-up was blocked by the arm of Abena, with the referee pointing to the spot. However, Hoban’s penalty was blocked by Greif to end any hope of a resurrection.

Slovan – who added insult to injury with a stoppage-time third through Daniel – now progress to play PAOK who were defeated 5-4 by Ajax on aggregate in the UEFA Champions League third qualifying round.