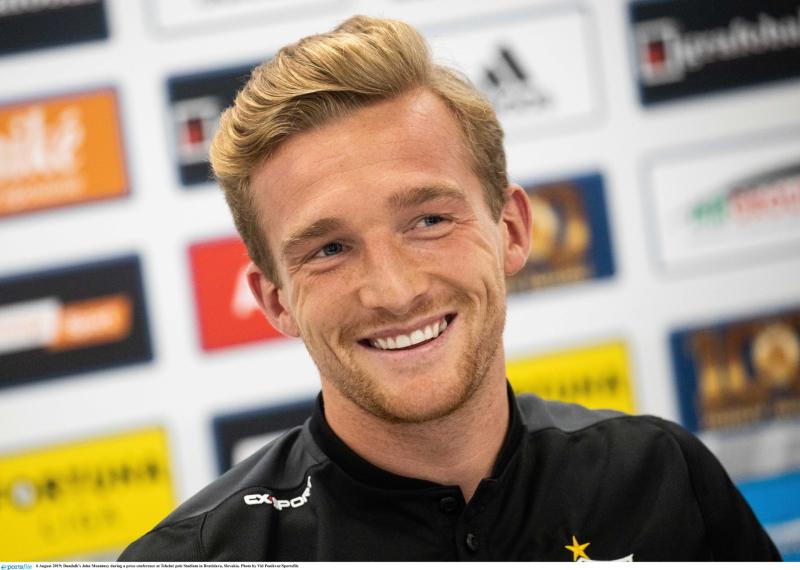 John Mountney was only inches away from bagging a priceless away goal in Bratislava last week, and it is missing out by those tiny margins that leaves Dundalk FC with what he says is a “dangerous” situation in Tallaght this Tuesday.

Dávid Holman’s 86th-minute strike in the Slovakian capital means it is very much advantage Slovan Bratislava going into their UEFA Europa League third qualifying round second leg in Dublin.

It could have been so different had Mountney’s injury-time header gone in. Instead, goalkeeper Dominik Greif did just enough to touch the ball onto the crossbar.

The Irish champions are now presented with a scenario where if Slovan score one, they would have to net three times to progress to the play-off stage.

There is confidence in the Dundalk camp that they can overturn the deficit – and repeat what they famously did to BATE Borisov three years ago – but Mountney knows they must stay mindful of their defensive duties.

“That’s the dangerous side,” the Mayo man admits. “We have to score, but everyone saw from the away leg the quality that they have. When you go forward and leave yourself open, they have players that can punish you.

“But I think, as a team, so far this year defensively we have been absolutely brilliant. That gives us a good platform when we defend well, for us to go forward and score. We have to back ourselves to score and at the same time keep the shop closed.”

Mountney, who is enjoying one of his best-ever seasons at Oriel Park, is hopeful that Tallaght Stadium can create more lasting memories for him and his team.

There is encouragement, he says, to take from the first leg in Slovakia, and he believes the home support will help push the players on.

“The thoughts are all positive towards Tuesday,” John says. “Everybody that saw the game out there, especially the first half, it showed that we’re more than capable of scoring against them and getting a result.

“Especially now in Tallaght in front of our home fans, where we have such good memories, I’m sure the crowd will get behind us. The plan is obviously to get straight at them and try to get the result.

“Tallaght has been great to us. We have nothing but good memories there. It’s a great stadium and they have obviously improved it, which is even better again. The pitch suits us; you can get the ball down and play. It’s somewhere we feel has been good to us.”