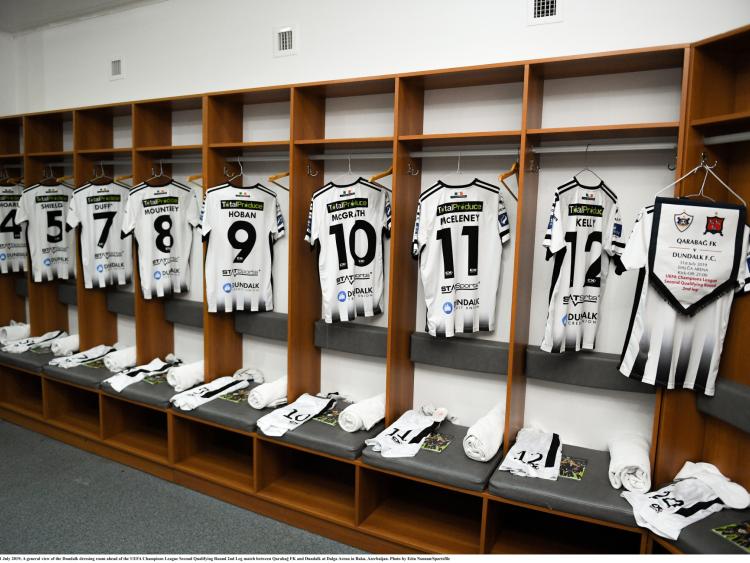 Dundalk FC jerseys in the dressing room ahead of tonight's UEFA Champions League qualifier away to Qarabag in Azerbaijan. (Pic: Sportsfile)

Dundalk FC head coach Vinny Perth has brought defender Daniel Cleary into his team for this evening's deciding leg of their UEFA Champions League second qualifying round tie with Qarabağ in Baku.

Perth was forced into the switch after midfielder Robbie Benson suffered a rib injury in the drawn opener between the teams at Oriel Park last week.

Seán Hoare is expected to take up a midfield role in his absence. Club captain Brian Gartland comes onto the bench.

Qarabağ coach Gurban Gurbanov, meanwhile, has made two changes to his midfield, with Míchel and Filip Ozobić – both unused substitutes in the first leg – coming in for Simeon Slavchev and Gara Garayev, who drop to the bench.

The officials for the evening are Norwegian, led by referee Svein Oddvar Moen.

Kick-off at the Dalga Arena – where the prize on offer is a third-round clash with Cypriot champions APOEL – is 6pm Irish time (live on eir Sport 1 from 5.55pm).

The full team lineups are below.