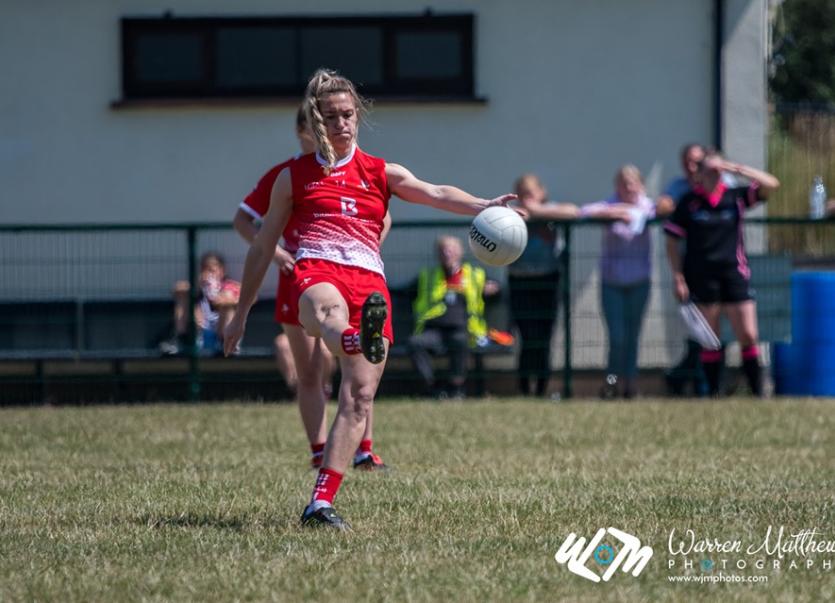 The notion that Louth have a soft underlay to their rosy red exterior was shot to pieces as Darren Bishop’s side booked their place in the All-Ireland JFC semi-final on Saturday afternoon.

With 10 minutes to play, it had looked as though the Exiles were going to romp to a comprehensive victory, one which would have put them in pole position to top the group and load further doubt on Louth’s title credentials.

But, in what their manager was content to call the most pleasing victory of his permanent reign, the Wee County fought back to dramatically prevail courtesy of captain Kate Flood’s point in the sixth minute of stoppage time.

Albeit, London will contend that the referee, Armagh’s Kieran McKeever, aided the sway of the game in Louth’s favour, especially during the closing stages. The whistler was also confronted by an angry spectator as he made his way off Páirc Clan na Gael.

It was a thrilling encounter. So impressive, in fact, that it may not be too outlandish to suggest that this is a potential final pairing, should London earn qualification to the last four by seeing off Carlow in the group’s final affair.

Though if they put in a performance as impressive as this, where they were arguably the better of the sides for longer, they ought to have little difficulty in progressing, which would leave semi-finalists of a distinctly similar level. This year’s junior championship must surely be the most competitive on record.

Ahead of their next outing, in four weeks’ time, Bishop will acknowledge that Louth have aspects to improve upon, despite the positives heavily outweighing negatives on a wonderful occasion. The Reds shot 12 wides, many of which were shot amid their stirring late burst, while conceding much easier than the team management would have liked.

Yet they began strongly and had it not been for Caoimhe O’Reilly, London’s goalkeeper, who was possibly the best player on show, Louth, Niamh Rice particularly, would have won this outing comprehensively.

The first of the custodian’s glut of stops came with Louth 0-3 to two to the good, but she was beaten by Aine Breen in the 14th minute as the hosts took control. Rice later had a strike disallowed, for a supposed double bounce offence, as pressure intensified on the London rear-guard. However, they emerged the stronger and a Naoimhín Daly goal on the brow of the break handed them a 1-7 to 1-5 advantage.

And that was a gap they extended to five courtesy of the second period’s opening three points. Susan Byrne - who enjoyed her best game of the season for Louth - and Rice chiselled the deficit back to three, though the decisive score looked to have arrived in a subsequent attack when Hannah Noonan rattled the net, leaving London 2-10 to 1-7 clear.

But they would register just once further, almost 15 minutes later, as Louth’s challenge was ignited by a wonderful Rice goal.

London still led with two minutes to play, when they lost influential centre-half Niamh Lister to the sin-bin, only for Rebecca Carr and Flood to level before Byrne and Fiona Morrissey traded minors.

It was sport, competition at its purest and extra-time looked to be on the cards, but up stepped the skipper supreme, Flood.