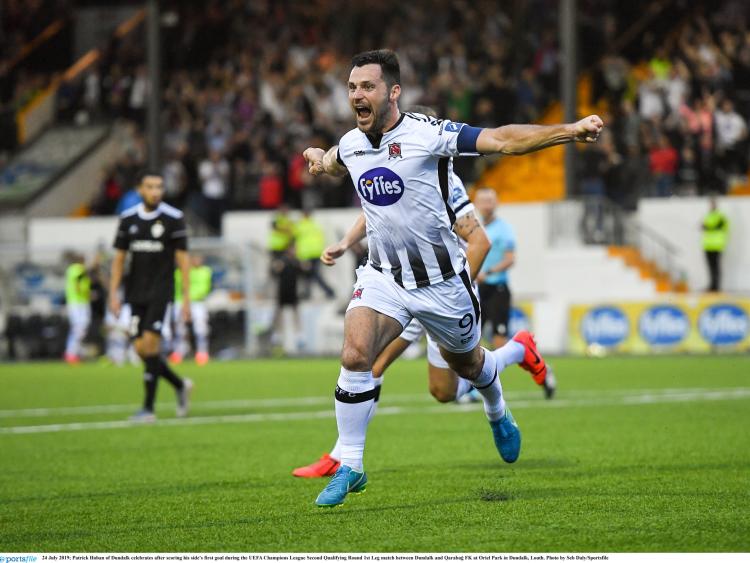 Captain Patrick Hoban’s 78th minute header kept Dundalk FC’s UEFA Champions League dream alive, but a late, late show should have resulted in a win over Qarabağ, who held on for a 1-1 draw in this second qualifying round first leg at a rocking Oriel Park on Wednesday evening.

The slick Azerbaijanis bagged an away goal in just the fourth minute through Mahir Emreli, and they could have had more were it not for record-breaking Gary Rogers.

The goalkeeper – now the League of Ireland’s highest appearance-maker in Europe – was quick off his line to deny Simeon Slavchev a second before half-time, while Hoban also made a goal-line clearance to keep the margin to one.

Dundalk were much better after the break, but Qarabağ ‘keeper Vagner was not troubled until 12 minutes from time. Andy Boyle’s pressure kept a Seán Murray corner alive, and Hoban was on hand to do likewise to the tie.

The Irish champions – backed by a loud support – should have scored again six minutes from time when John Mountney and Seán Gannon combined in setting up Jamie McGrath, but the young midfielder’s shot was straight at Vagner.

In injury-time, Dundalk piled on the pressure, but they could not force a way through, with Dane Massey firing over before Michael Duffy’s shot was scooped behind by the relieved Wagner.

After watching his team draw a fourth successive blank in European competition, head coach Vinny Perth welcomed back Duffy in the only change from the dramatic win in Latvia last week.

Duffy had missed the penalty shootout victory over Riga due to the birth of his first child, and he was immediately restored to the side in place of Mountney, with McGrath operating on the right. 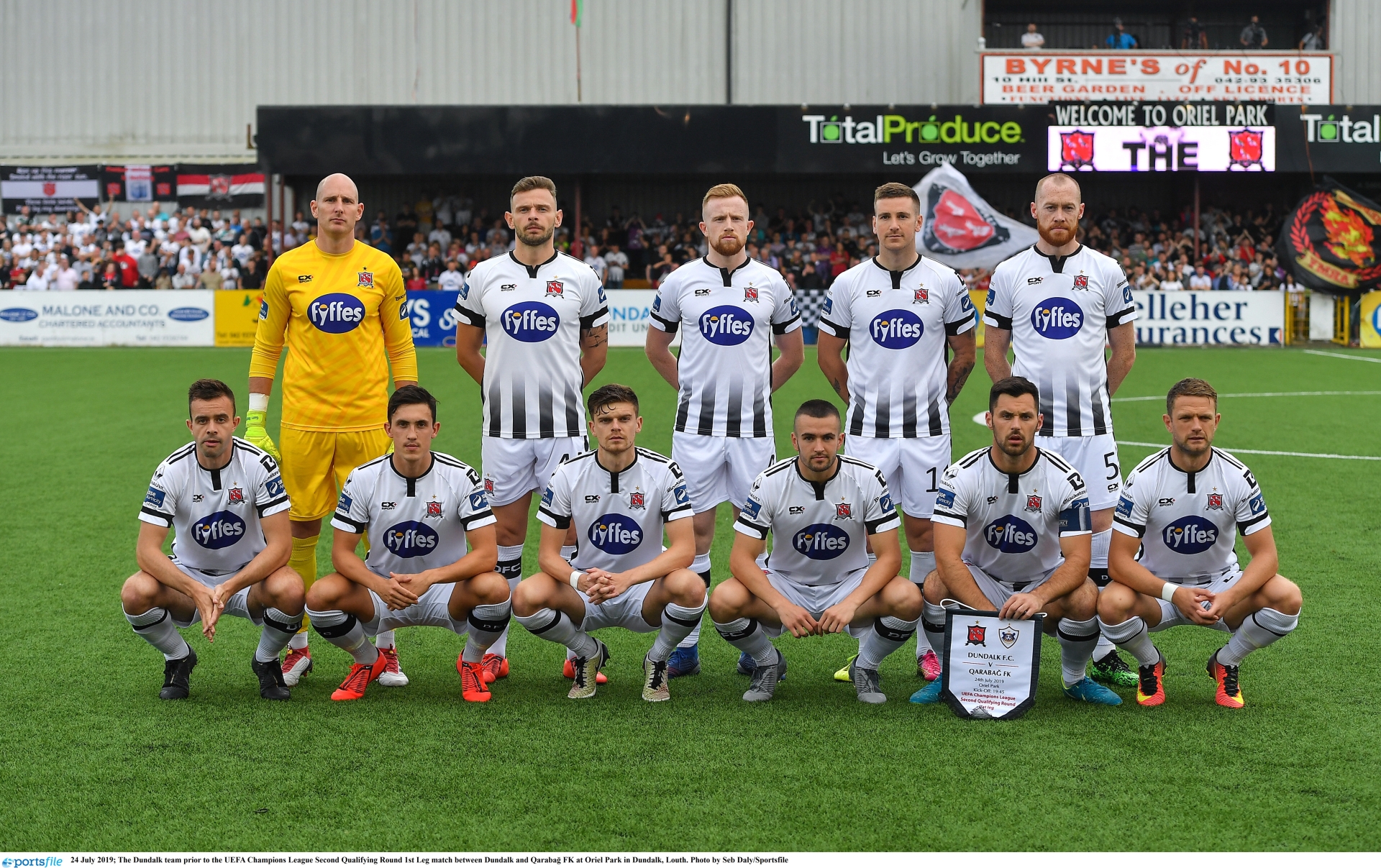 Qarabağ had eased past Albanian outfit Partizani in the previous round. Here, they made three changes from their 2-0 home win seven days earlier; Gara Garayev, Slavchev and Emreli came into their line-up.

Dundalk had started brightly; in the third minute a Duffy corner was met by Boyle whose looping header dropped wide.

However, that was as good as it got for Perth’s players. They were architects of their own downfall in the fourth minute when Seán Hoare cheaply conceded a corner. Jaime Romero delivered from the left and Emreli rose to knock a header goalwards, the ball perhaps taking a touch on the way past Rogers.

Dundalk were clearly shaken and they were on the back foot again moments later when the impressive Abdellah Zoubir and Emreli combined, the latter’s cross to the back post met by Slavchev, but he headed off target.

The visitors almost grabbed a second in the 40th minute. Zoubir’s through ball split the defence and left Slavchev with just Rogers to beat, but the record-breaker came out to make a smart block.

Hesitancy in the Dundalk defence nearly cost them when Emreli’s header following a corner was cleared off the line by Hoban. Searching for a second before half-time, Zoubir then danced his way through once again, but Rogers pushed the effort away at his near post. 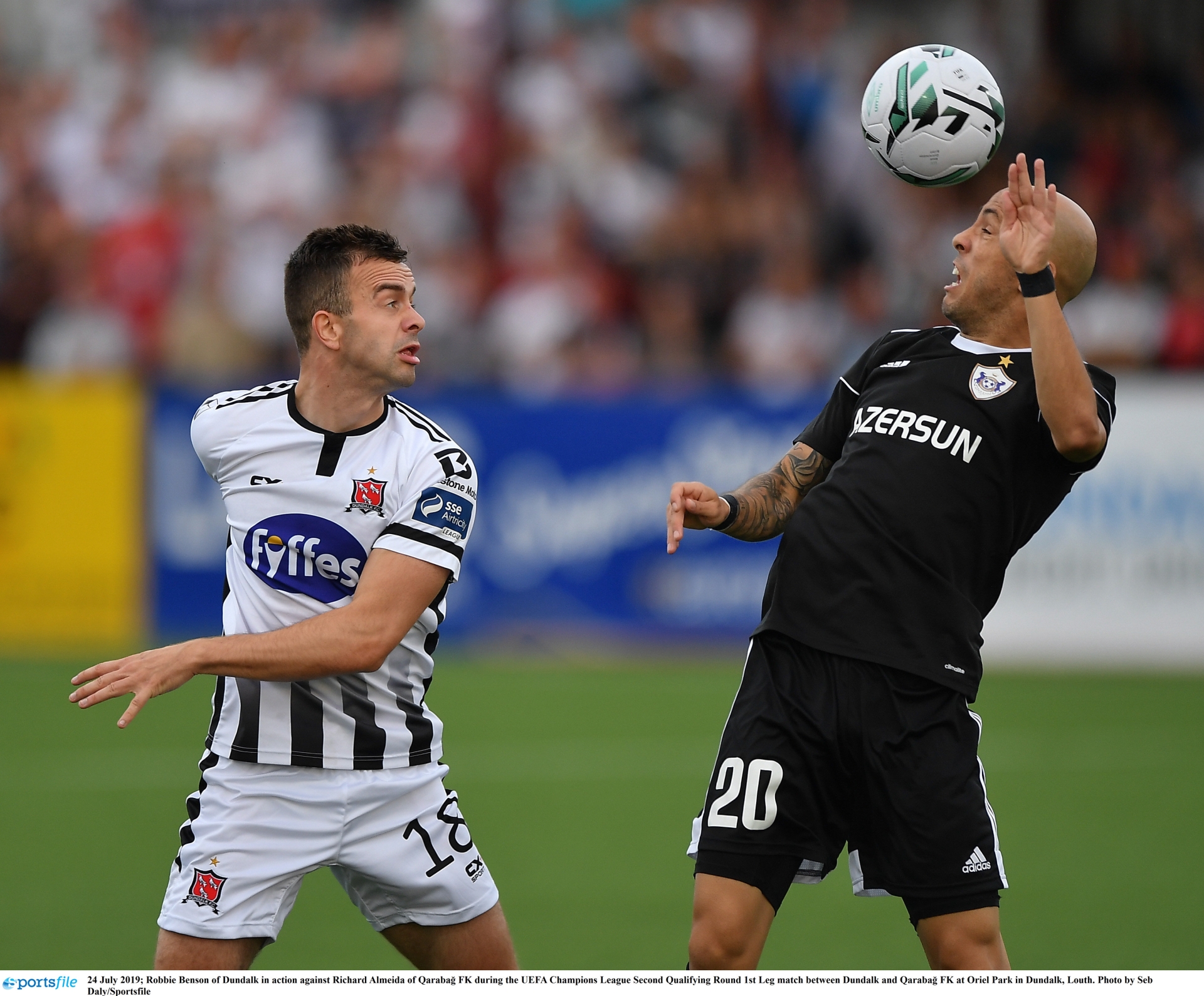 Dundalk came out for the second half with renewed energy, and three minutes after the restart, they had a loud penalty appeal turned down. Patrick McEleney went down under a challenge from Almeida, but a corner was all the hosts earned.

They should have equalised in the 77th minute when Duffy found McGrath, but his shot was deflected behind by Rahil Mammadov. However, from the corner, Dundalk did level. Murray delivered to the back post, Boyle put the pressure on, and Hoban finished from close range.

And The Lilywhites may have had a second in the 84th minute through a raid down the right. Mountney and Gannon were involved, with the latter squaring to McGrath, but Dundalk’s no10 hit his shot straight at Vagner.

Qarabağ remained a threat and Zoubir flashed a strike narrowly wide late on. But, again, Dundalk should have won it in injury-time.

Firstly, a long Murray free-kick into the box was knocked down by Hoare to Massey, but he struck over with just the ‘keeper to beat. Then, in the last chance, Duffy broke through on goal but his shot was clawed behind by Wagner as Qarabağ just about survived.