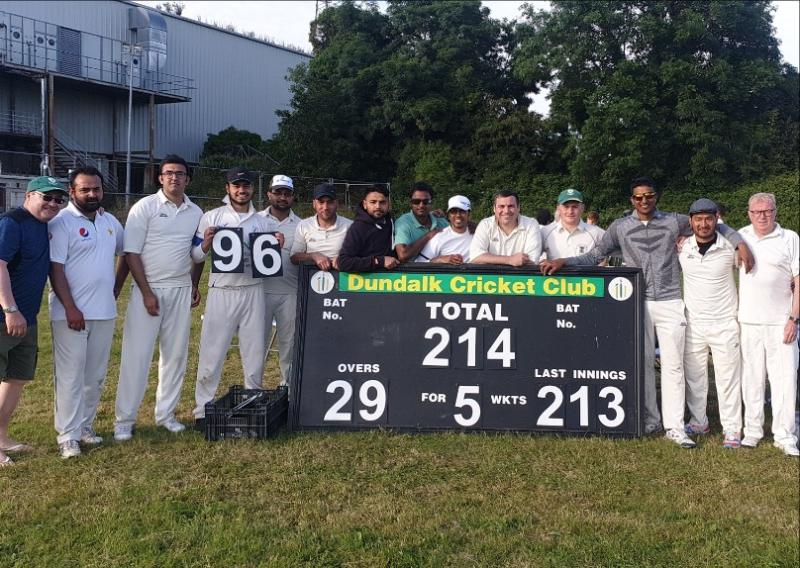 Dundalk Cricket Club stormed to a resounding first home win in their new pitch at Hiney Park on Sunday.

Dundalk Cricket Club stormed to a resounding first home win in their new pitch at Hiney Park on Sunday. Facing a tough test against a Malahide team that had already beaten them earlier in the season, Dundalk comfortably chased down a target of 213 runs.

Malahide won the toss and captain Brian Gilmore elected to bat first. They started their innings brightly, with Adam Doyle and Subhadip Roy scoring the bulk of the early runs. Dundalk hit back, however, with Mudassar Rafique (2-34) claiming both wickets in the space of two overs. Despite being rattled briefly, Malahide steadied their ship and a composed partnership between Gilroy (51 not out) and Ryan Condron (23 not out) saw them bat out their allotted 40 overs with a total of 213 runs.

Facing a challenging target, Dundalk could have been forgiven for beginning their response cautiously. That was not the thought on the mind of Muhammed Zahid, however, who blasted his way out of the blocks from the very first ball. With a swashbuckling performance, Zahid smashed boundary after boundary to push Dundalk past the halfway mark in just 10 overs. He fell just short of a maiden century though, caught for 96 runs with Dundalk in a commanding position.

After Zahid fell, Dundalk’s middle order wobbled slightly, with Syed Shah and Darshan Patel getting out cheaply against a resolute Malahide bowling attack. Kapil Pun played a big part in stabilising the run chase, providing much needed defence while Umer Khan followed in Zahid’s footsteps and went on the attack. With a flurry of stylish strokes, Khan brought up his half-century and pushed Dundalk within sight of the target. His partnership with Shakeel Qamar (the pair finishing 68 and 9 not out, respectively) saw Dundalk over the line with more than 10 overs to spare.

A remarkable first win at home for Dundalk brings them momentum at just the right time in the season. They travel to Merrion next Sunday before a double header against DLR County and Railway Union at home on the 20th and 21st of July. Training continues on Wednesday nights at the club’s pitch behind Oriel Park. The club is also starting its Youth Training camp from Thursday, July 18, 2019 which is dedicated for 10-17 year old boys and girls. Contact Secretary Brent Higginbotham (085-2424268/contact@dundalkcricket.com) or the club’s Facebook page for more details.