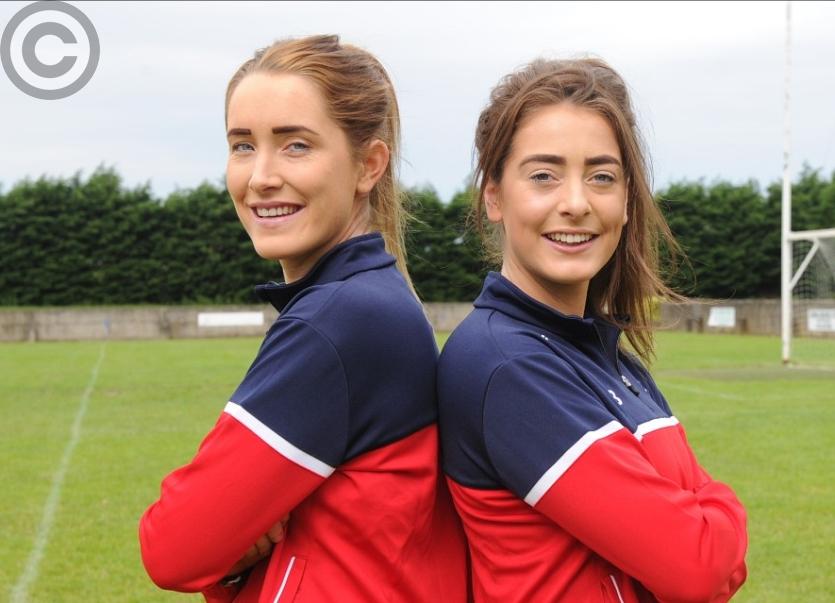 Playing alongside her sister has its benefits for Eimear Byrne, the youngest of the clan’s four siblings. Not only does it provide the DCU student with a midfield partner, as well as some in-game assurance, but something perhaps even more important.

“I’d no lifts to training last year…,” she says, breaking from a smile to a giggle to a belch of laughter.

It’s roughly 9am on a Sunday morning and the three of us, your writer included, are sitting on the second floor of St. Mochtas’ clubrooms. Fresh from an opening round championship win over St. Bride’s less than three days earlier, the Louth Village girls are set for a 10am start on the training pitch.

Yet that type of commitment has developed into a way of life. The desire to play and represent their county, and so maintain a unique family run, outweighs the heftiness of human logic.

Declan, the eldest, has played over 100 times for Louth, is married, has a full-time job and is building a house.

Next is former Wee County captain, Aoife: A primary school teacher who’s in the process of finishing her house’s development.

Ciarán, or ‘Casey’, needs no introduction. Retired Aussie Rules player. The man Louth hopes are pinned on. Arguably the most unfortunate fella around, plagued by injury.

And Eimear. Twenty-one, preparing for her final year at University, based in the capital for portions of the year and working in a part-time job which entails 5:15am rise times.

Yet, in spite of there being a multitude of reasons that would condone them being otherwise, they’re all Louth seniors.
“During college I lived in Dublin, but myself and Deirbhile Osborne (team-mate) came down the road together (for training),” Eimear explains.

“We’re not men, we don’t get funded for that; whatever I was getting from the part-time job at the weekend was going on diesel to come back training.

“But it’s unacceptable to miss training. You just go and that’s it. If he (Darren Bishop, manager) says ‘jump’, I would literally say ‘how high?’”

And they do it all in the name of a relentless quest for success. Having played together for the first time seven years ago, in a club game against Roche, Eimear hastens to point out, the pair have never sampled silverware in tandem.

That is, ultimately, the dream and when the topic is brought up, the pair may as well have glided into the realms of fantasy, or, as they would hope, fortune-telling.

“Win Leinster, win the All-Ireland, win with the club and be together for all of them.” Eimear has firmly set her stall out.
Meanwhile, Aoife’s prophecy entails a touch of deja vu, Mochta’s men having won the intermediate championship last year. And what a party that was.

“The bus will pull in, the village will be mad, the fireworks will go off, the bonfires started…”

A stoppage in conversation ensues, as the tape recording subsequently testifies. They’re in the moment.

MOTIVATION
Of course, hunger is but rudimentary in the inner sanctum of an athlete, a Gaelic footballer in the Byrnes’ case. But that drive’s provision varies depending on the individual.

In their case, it seems to be the lingering pain of past defeats which has them setting the bar so high, in terms of the honours they want to accrue. Assess Eimear’s take on an all-conquering attempt and it’s clear the lines between success and failure aren’t blurred.

While they haven’t won on the big stage in unison as yet, there have been occasions in which they’ve gone close. Last year’s championship semi-final defeat by Cooley stands like Dumbo the Elephant in the corner of the room.

“That hurt,” says Aoife. “I think I was still crying that evening.”

Taking over, Eimear adds: “It hurt a lot, that beating. It was one of the worst (defeats) I’ve ever gone through. Obviously going to watch the senior final, Geraldines and Cooley, and I’ll never forget it… ‘Oh my God’...”

It was as though that defeat was the latest chapter in a miserable sporting epoch, Eimear having been on the field and Aoife in the stand during last year’s All-Ireland JFC final loss to Limerick at Croke Park.

“It was tough, watching on, sitting in Croke Park. It was hard to watch,” Aoife remarks.

Yet it didn’t deter her from recommitting when boss Bishop asked her on board for the present campaign. And not even injury, which ruled her out for the majority of the National League, derailed Aoife’s bid to be a part of the retribution tilt.

LIFE IS BALL
The Democrat: “So, outside of football, what is there?”

Aoife: “I’m building a house at the minute… that’s my other priority.”

Eimear: “Other than football, we do nothing.”

It may be par for the course, though it’s difficult to imagine a family with fewer fractures. Playing football and doing it with such distinction fills their parents with pride.

“I think Big B (Brendan, father) is there in the house very happy,” Eimear notes.

Of more particular relevance, however, is the brother/sister dynamic. They both agree that Declan is the “most committed person” to football they know.

“He treats his body probably better than Ciarán ever would,” adds the younger of the duo.

While ‘Casey’ is next under observation. And there is really only one place to start, fitness troubles aside. His move, at 18, to Carlton, Aussie Rules and down under.

Given the adoration spirals deep, the cavity created by his absence grew larger and larger. Time wasn’t the healer it was alleged to be.

Aoife: “I hated it. Every Christmas when he was going away, I just used to put a note on my door: ‘Don’t come in to say goodbye’.”

Eimear: “He’s the GOAT (Greatest Of All-Time). Anyone that knows Casey, he’s a bloody nutjob, but so much fun to have about the place. Every time he’s home he’s so giddy. He really does bring a life about the place and when it’s gone you miss it so much.

“Anyone else who’d have had those injuries would be a different person, but he is so resilient. His personality is infectious and I think his new job with Defy suits him. You can’t say no to him!”

WOMANCE
There is unambiguous agreement when the topic of the girls’ respective playing styles arises. Whereas Aoife is the more conservative and able distribution-wise, Eimear is ‘100 miles an hour’, marrying blistering speed with a tendency to score heavily. This, the latter believes, has manifested itself from her younger days spent as a forward.

Yet they’re of the same mould away from the football field. Joined at the hip.

Eimear: “Wherever Aoife goes I’m usually not far behind.”

Eimear: “It’s cool, because you’re playing with your best friend, your sister; she’s a heart of gold. It’s cool, I’m not gonna lie.”

Consensus is reached, too, when talk of what major success would do for Louth, in the form of an All-Ireland title.

The players are there, Aoife insists, and with a management such as this year’s, progress is practically inevitable if the bars of negativity, formed by years of disappointment and defeat, can be melted by a major triumph. A win this year may be the prelude for more.

But, first and foremost, claiming a second consecutive Leinster junior crown must be the primary motive. They enter Sunday’s Cullen Park assignment against Carlow having won, easily, the sides’ spring league fixture.

Though, with Kilkenny having pulled out of the provincial grade, Louth’s last game was the Division Four semi-final reverse to Antrim, after extra-time; a game which they led by four points entering the closing stages.

Eimear was subsequently named on the Team of the League, though the impression is that she would concede that honour for another Leinster title, regardless of the competition’s depreciation.

“You just have to accept that that’s the set-up. You can’t go in with the mindset that it’s just a final; a final is a final no matter what day you put it on. It’s still silverware.”

On an unrelated note, Aoife reckons she’s the more nervous of the pair, but, perhaps, in a bid to quell the emotion, she should abide by what she preaches.

Eimear: “At the start of this year I was stressed with college. She saw that I was a bit down and came home with a black top from Penneys with ‘Believe In Yourself’ on it.”

It worked. The exams were passed.

So, instead of going for the synchronised look, entailing their Louth tracksuits, maybe the Reds should invest in Penneys wear ahead of Sunday.