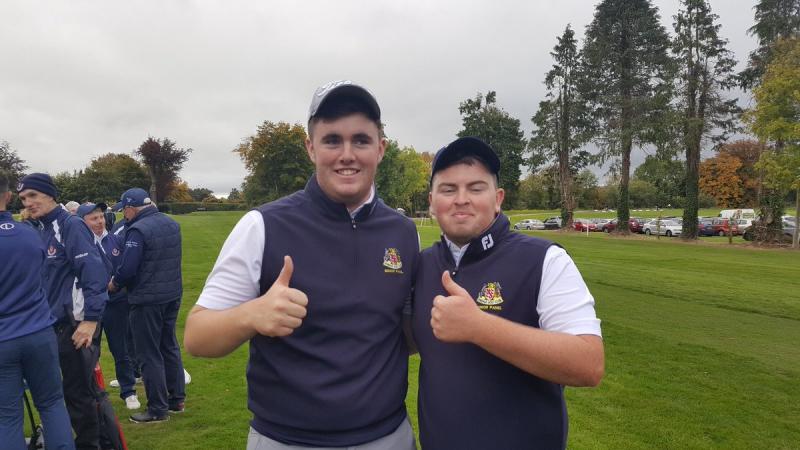 Eoin Murphy and Caolan Rafferty battled to victory for Dundalk Golf Club at the weekend.

Dundalk Golf Club are through to the Leinster semi-finals of the Barton Shield after beating Carton House in the last eight at Seapoint on Saturday.

Last year Dundalk won the Leinster title to claim the club’s first ever senior pennant, but lost out on the national crown when they were beaten by Athenry in the All-Ireland final.

Caolan Rafferty took time out from his preparations for this week’s R&A Amateur Championship in Portmarnock to make himself available for the tie and he partnered Eoin Murphy in what turned out be a very close encounter.

The Dundalk pairing took a one hole lead twice after the third and 10th holes, but were pulled back on both occasions to all-square by Carton House birdies at the sixth and 11th.

Carton House finally got their noses in front on 14 when the Dundalk pairing recorded their only bogey of the day, but they bounced back immediately with a birdie at the next hole, the par three 15th, to get back to all-square and it stayed that way until they were called in.

In the other match Aaron Grant and Josh Mackin were always in control having taken the lead with a birdie on the second hole. They stretched that lead to three holes by winning the fourth and fifth holes with pars before Mackin drained a 20 foot on the par five sixth for eagle and a four hole lead.

A bogey at the par five eighth saw them lose a hole, but they won the ninth with another birdie to turn with a four hole lead which then stretched to five with a win on the 11th.  Carton House did win 12 and 14 to pull the Dundalk lead back to three, but a win on 16 restored the four hole advantage with two to play.

Dundalk will now face the winners of the quarter-final between Corrstown and Woodbrook on Saturday, July 27, at 7:30am in Royal Tara with the final due to take place at 1pm the same day.