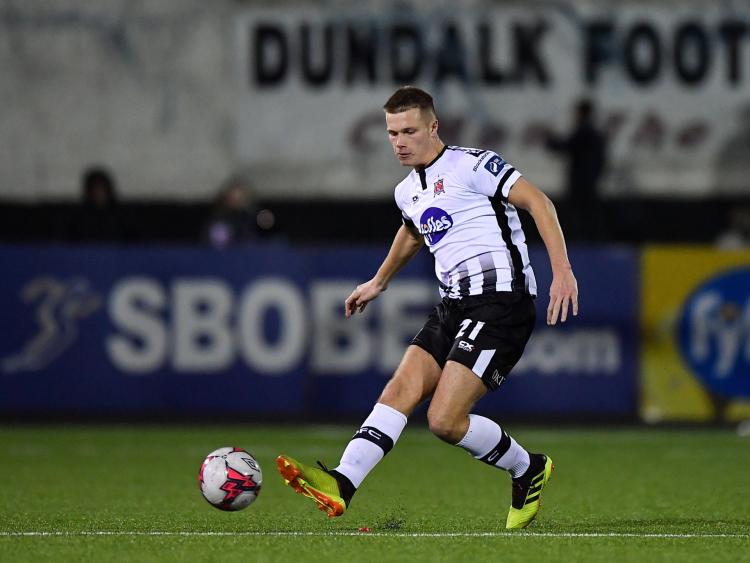 Dundalk FC will be without two of their most in-form players, Daniel Cleary (pictured) and Dean Jarvis, for their top-of-the-table clash with Shamrock Rovers at Tallaght Stadium. (Pic: Sportsfile)

Dundalk FC will be without two of their most in-form players, Daniel Cleary and Dean Jarvis, for their top-of-the-table clash with Shamrock Rovers at Tallaght Stadium at the end of the month, after the pair were ruled out through suspension.

Cleary has been singled out for praise by Vinny Perth in recent weeks, and the head coach will be left particularly frustrated by this ban.

It was incurred after the centre-half picked up his fifth yellow card of the season in last month’s EA SPORTS Cup quarter-final victory over UCD.

Jarvis has also been on the top of his game and has edged ahead of Dane Massey in the pecking order at left-back, with his performances earning him a nomination for the SWAI’s monthly award for May. His fifth caution of the campaign came in the league victory against Sligo Rovers.

The defensive duo would have served their suspensions had Dundalk been in action before the mid-season break.

However, their scheduled SSE Airtricity League Premier Division visit of UCD was postponed due to The Students having players involved with Stephen Kenny’s Republic of Ireland U21s at the Toulon Tournament.

Perth and the club had been keen to arrange a replacement fixture.

They made contact with Derry City in the hope of bringing forward their July 5 trip to June 14.

However, Derry wished to fulfil their game with Cliftonville, which Candystripes boss Declan Devine described as “more than just a normal friendly” as he runs the rule over players ahead of the summer transfer window.

Dundalk had also suggested moving their home clash with Cork City on July 19 – a fixture which needs to be rescheduled due to European involvement in any case – to last Tuesday, 11 June.

Cork, though, were understandably unwilling to agree to playing the game just 72 hours before their trip to Sligo.

That means Cleary and Jarvis must now sit out the crunch clash against Rovers. Brian Gartland – who captained the team in the scoreless draw in Tallaght in March – and Massey – who has started both league meetings with the Hoops this season – will come in, as Dundalk look to strengthen their position at the top.

Shamrock Rovers have made tickets available through their website, shamrockrovers.ie/match-tickets, for Dundalk supporters ahead of the much-anticipated June 28 showdown.