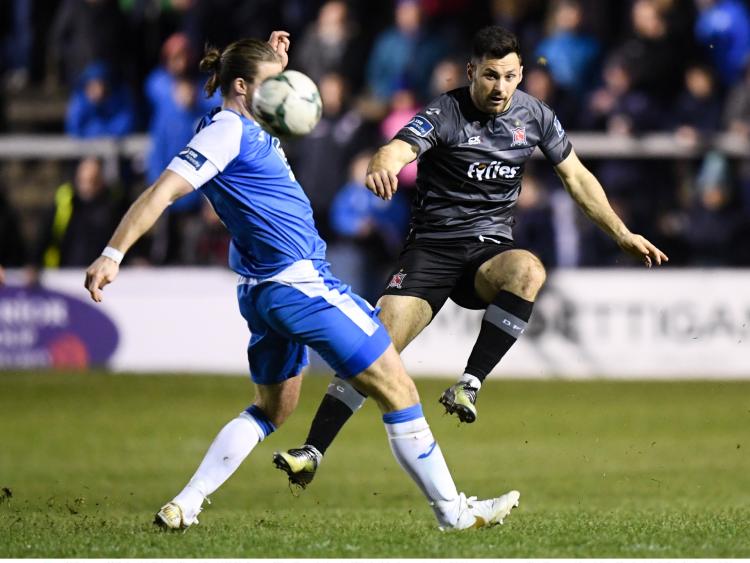 Dundalk FC vice-captain Patrick Hoban says his team must “make sure that we are on our game” as they look to finish off the first half of the season on a winning note when they tackle Finn Harps at Finn Park on Saturday evening (8pm).

The reigning champions came unstuck in Donegal in their second outing of the campaign in February, when they needed a 70th minute Brian Gartland equaliser to claim a point.

However, that was a rare slip-up against the Ballybofey-based club, who that night ended a near 12-year wait for a goal against Dundalk.

The Lilywhites had won the previous six Premier Division meetings on an aggregate score of 20-0, and they have since resumed normal service with a routine 3-0 victory over Harps in April thanks to Daniel Kelly’s hat-trick.

Harps have also conceded 14 goals in their last four league outings. However, Hoban knows how hometown tactics can work, with Ollie Horgan’s men running the likes of Shamrock Rovers, Bohe- mians and Cork City close on their own turf this term.

“It’s a very difficult venue to go to, because the pitch is in five yards either side,” the club’s record scorer noted. “They try to stop you playing, they sit in and they make it very difficult for you on the night.

“But that’s down to us to go there and try our best to get three points. It’s never easy; you can see that if you’re not on your game, you get punished in this league. We have to make sure that we are on our game on Saturday.”

Dundalk go into this weekend on the back of an 11-match unbeaten run in the Premier Division, which includes 10 wins. The other, a 2-2 draw against Derry City, was one where they threw away a two-goal lead.

It has been an almost-perfect run of form since they lost at The Showgrounds on April 12, and they gained revenge for that defeat with an emphatic 4-0 win over Sligo Rovers at Oriel Park last Friday.

That result sends them to Finn Park on a high. Their strong team spirit was evident in their latest success when Hoban decided to give up the 80th minute penalty which he had earned, as he handed the ball to John Mountney to complete his hat-trick.

“The way he put it to me, I said ‘yeah, you can have the penalty’, because he has never scored a senior hat-trick before. Once he said that, you have to give it to him to try to score his first hat-trick. It’s just one of those things and I’m absolutely delighted that he put it away.”

It was also an example of Hoban’s captaincy. The 27-year-old has been the skipper a lot this season, with Brian Gartland being rotated due to the strength in depth available at centre-half. But he says the armband does not alter his mindset.

“It’s no different to what I was doing last year,” he said. “I felt like I was a good leader last year. I don’t change the way that I am. I wear my heart on my sleeve sometimes. I can be moany. But I like leading the team, I really enjoy it and I think the lads like it too – I’m happy out.”

After this Saturday, Dundalk will have a 20-day break before they face Shamrock Rovers, with a trip to Spain planned in between as they put full focus into their preparation for the late June journey to Tallaght.