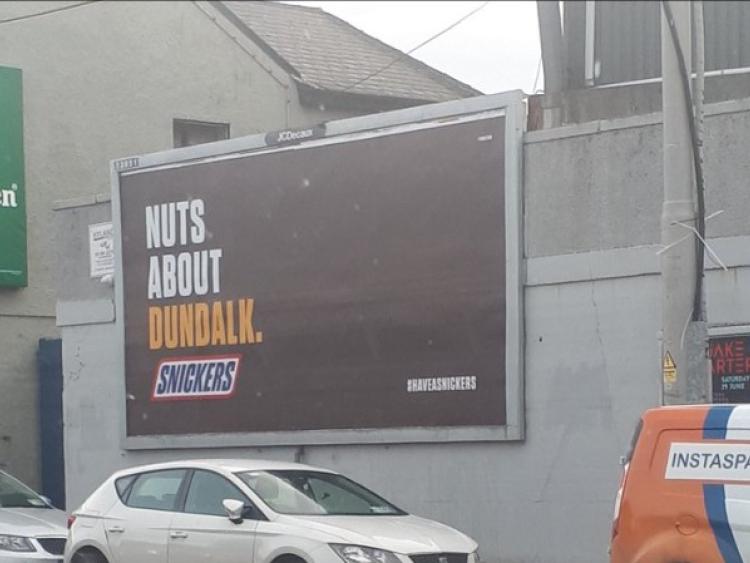 Mr. Gabay is one of the leading brand strategists and, in 2016, was commissioned to write a marketing report on the League of Ireland.

His effort could have been best described as comedic. “Under John Delaney it’s been amazing…” we were told, the league was described as “cool” and St. Patrick’s Athletic were abbreviated to three different forms on the one slideshow - “Saint Pats”, “St Pat’s” and “St Pats”.

Alan Partridge couldn’t have scripted it.

Isn’t it just a pity that Gabay couldn’t see what was obvious. Snickers and billboards. Duh!

Twitter went into overdrive last week when a picture emerged from an advertising display outside of Cork City’s Turner’s Cross home. An advert for Snickers, it read: ‘Nuts about Dundalk’.

Now if a red rag enrages a bull, nothing quite boils blood on Leeside like the mentioning of Dundalk. After 2014 and ’15 and ’16 and last year and likely this and maybe even 1991… it’s fair to say the Lilywhites have been a sharp thorn in Cork’s side.

The two clubs and Snickers Ireland got in on the act, exchanging a series of banter-laden tweets. “They’re not them when they’re hungry,” being only of Dundalk’s witty remarks.

Interaction was huge, League of Ireland interaction, something which isn’t always easy to nurture when domestic football subscribers, on a wider Irish scale, are but a drop in the ocean.

Why Gabay’s report remained firmly in mind as tweets were flung around in relation to the Cork-based billboard, I don’t know. Perhaps, seeing as we’re still talking about it three years on, the Englishman’s borderline-facetious compil- ation was successful in that it gave the league some publicity. ‘There’s no such thing as bad publicity,’ some say. But there is, and that was.

Ultimately, given the predicament that the FAI currently finds itself in, clubs’ promotion is going to have to be largely self-driven and social media affords them a useful tool in this quest.

Albeit it may seem innocent, light-hearted slagging such as Thursday’s helps this, one would think.

Bristol City’s Twitter feed rose to prominence last season for their posts after goals for, which included the scorer doing some sort of jig or dance or mode of behaviour more associable to a child. But it worked. Sky Sports did a special feature on Bristol’s media team and their social followership probably multiplied at a rate of retweets.

In Ireland, Cork and Shamrock Rovers have been very effective in their usage of online resources. On Thursday, Rovers released another promo video, the latest in a long line, which saw no words uttered, just two ladies standing smoking with subtitles beneath suggesting what they were talking about. It was marketing at its best.

Snickers’ effort was shrewd on their part, too. Who knows, bar sales may have gone through the roof in Cork, or more likely Dundalk, but they have had a dual effect. On a sleepy midweek day, it got people talking about League of Ireland.