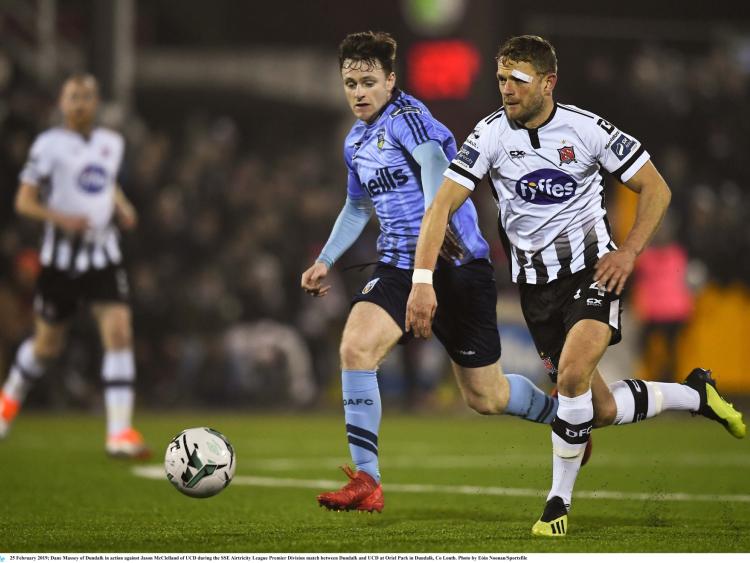 Dundalk FC's Dane Massey and Jason McClelland of UCD during the league meeting at Oriel Park during spring. (Pic: Sportsfile)

Vinny Perth is eager to reclaim the EA SPORTS Cup this season, with Dundalk FC’s head coach calling for another strong support for his team when they take on UCD in the quarter-finals at Oriel Park on Monday night (7:45pm).

In an effort to get more people through the turnstiles, the club have reduced ticket prices to €5 across the board for all areas, and Perth has made it clear that he will be “taking it very seriously”.

Dundalk just about saw off UCD on the way to winning the competition for a sixth time in 2017, knocking them out only on penalties at Oriel Park, at the first hurdle.

The Lilywhites lost their grip on the trophy last August when they were beaten by Cobh Ramblers at St. Colman’s Park in the semi-finals, and Perth is keen to avoid another upset as he aims to return this piece of silverware to the cabinet.

They have already beaten St. Patrick’s Athletic in the second round this term, thanks to goals from Georgie Kelly and Dean Jarvis.

Each goal scored by Dundalk in cup competition this season will earn €100 for the Temple Street Foundation, and this will be the first time that they will line out in their purple kit at home.

Looking ahead to the tie, Perth – whose side entertain Sligo Rovers in the league on Friday – said: “Monday’s game is all we’re focused on, trying to get a team fit on the pitch. We’ll be strong in certain areas and not so strong in other areas because of injuries. We’ll have a couple of young players in around the squad.

“But at the same time, it’s a competition we want to win. You get to a quarter-final, it’s a game we want to win and we’ll go all out for it.

“Our support over the last couple of months has been outstanding. I’ve really felt that myself, personally. They really got behind the team on Friday and never gave up on them. We need that on Monday as well, because it’s the only trophy not in Oriel Park at the moment and I want that back.

“We will be taking it very seriously. I don’t see UCD making many changes because they don’t have a big strength in depth in their squad. It’s a proper game on Monday and we look forward to it.”

While Dundalk are on a 10-match unbeaten run, UCD have hit a wall with nine straight defeats. Their only goal in that period came against Dundalk through Yoyo Mahdy at the Bowl last month.

Mahdy, incidentally, was the man who missed the decisive penalty in the aforementioned shootout when these teams last did battle in this competition two years ago.

Temple Street Children’s Hospital Foundation will also be fundraising at the game, with the club asking supporters to “please donate generously if you can”.