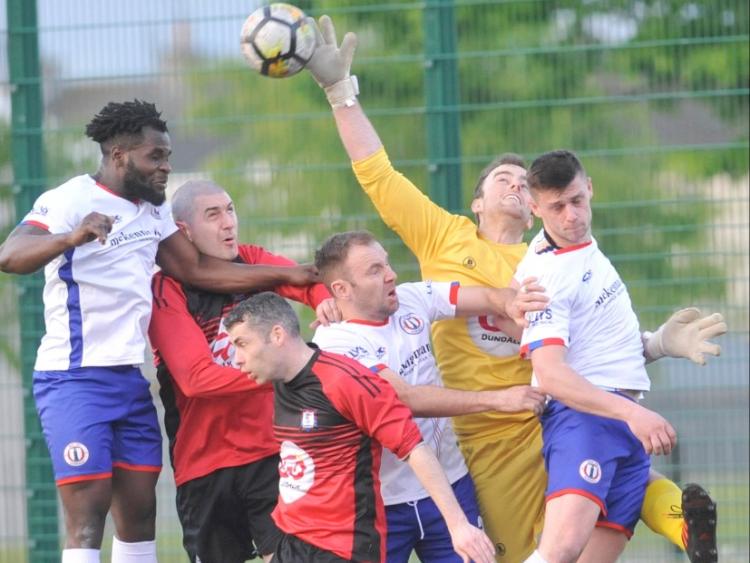 Champions Boyne Harps scored in the final 10 minutes to see off Muirhevna Mor in United Park on Thursday.

The visitors had plenty of chances in the game and had an effort ruled out for offside during the opening half. Paudi Hearty and Brendan Hughes also went close either side of the interval, before Martin Smith blazed over late on.

Square United endured a really difficult second half away to Trim on Friday night, having trailed 1-0 at half-time.

Jason McConville’s team were the better team in a close game, creating several chances despite lacking a cutting edge in front of goal.

The nearest Rock came to making a breakthrough came just before the interval when Bellurgan centre-half Stephen Finnegan was forced to clear off his own line.

And that intervention was proven crucial after Sheelan hit the game’s only goal.

Bay FC maintained their unbeaten Division One record by seeing off Redeemer Celtic in a repeat of last season’s third tier play-off final in Muirhevnamor on Thursday night.

Alfonso Crespo’s first half goal had Damien Bellew’s side in front at the interval, after an eventful first half which saw ’keeper Kevin Mullen save a Kevin McCormack penalty and Ryan Duffy receive his marching orders for Redeemer on a second yellow card.

Bay continued to hold the upper hand after the break, but had to wait until the dying embers of the affair before adding a second, when Anton Webb beat Kyle Murphy. By this point, Redeemer were two men down after Kurt Murphy’s dismissal.

Conor Macken’s double helped Glenmuir record their first away win of the season on Friday night.

Kentstown started the brighter, but a Macken penalty put the Glens in front, only for the hosts to draw level by half-time.
But the Hoey’s Lane side were superb in the second half and took the points with Gino Cooney’s wonderful, outside of the boot finish from 25 yards and Macken’s corner, which went directly in.