INSIDE TRACK | A wonderful night in the Clans, Dundalk FC on the march, Colm Corrigan and Leinster rugby magic.... 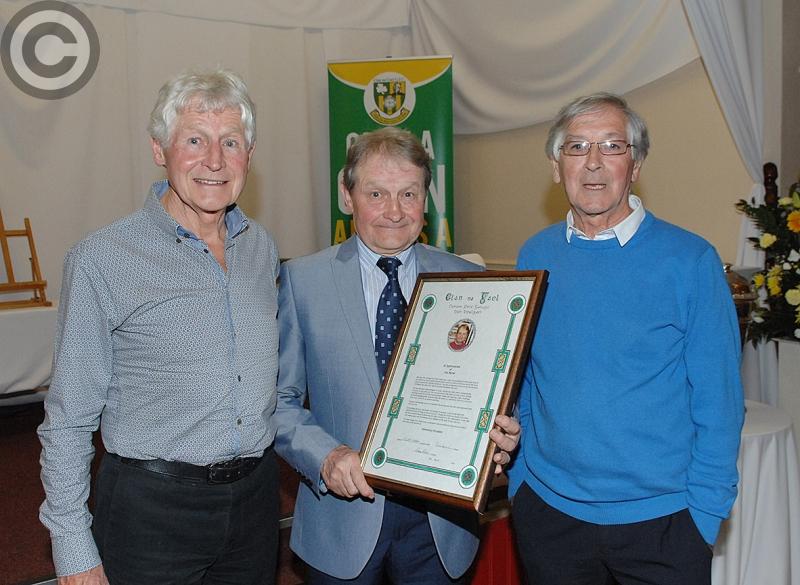 Fra Byrne with his brothers, Gerry and Robert, at Clan na Gael's awards night in the clubrooms on Saturday night. (Pic: Arthur Kinahan)

It was difficult to keep up with all that was going on over the weekend, but somehow Inside Track managed it, taking in a bit of this and piece of that, most of it coming up on the telly. But there was one ‘live’ event, and, good to say, this was the highlight.

Look around every sports club, taking in all codes, and you’ll find workers whose names wouldn’t belong in the household category. They do their work in a quiet, unobtrusive manner and if they get credit it wouldn’t nearly be as much as they deserve. Without them, their club couldn’t exist.

Clan na Gael, the second-oldest of Dundalk’s six Gaelic football clubs, have had dozens, maybe hundreds, of what are best labelled as unsung heroes in their 103 years. These people have helped the club graduate from very humble beginnings to what is currently in place in the heart of Castletown, an impressive centre, dressing rooms and two playing fields.

The part Leslie Toal and Fra Byrne have played in making much of what has happened in the half-century or so – let’s hope that doesn’t make the lads feel ancient – was recognised at a pleasant function on Saturday night.

On an occasion when Clans’ successful ladies team and its best footballers and workers for 2018 were given recognition, and the team that brought the Joe Ward Cup to Castletown for the first time 60 years ago were being honoured, Toal and Byrne were named as club presidents. They were being asked to come out from the shadows to receive much-deserved recognition.

GAA President, John Horan, was present, Seamus O’Hanlon acted as MC, and chairman, Niall Weldon, represented the club with style. And, as the two being honoured had done for years, Maurice Harrison beavered away in the background, having, with the help of former chairman, Peter Brannigan, put the whole night together.

It’s been quite a number of weeks since Dundalk FC came under Inside Track’s gaze. It hasn’t done the team tutored by Vinny Perth any harm. In fact, it probably has been a huge benefit to them.

A few days before the February 26 edition of this ’paper appeared, Dundalk could only draw with Finn Harps. Shamrock Rovers were blazing a trail, and there was a wavering Oriel Park confidence in the new sideline regime.

Nearly three months on, the Carrick Road swagger, honed by several seasons of success, is back. Rovers, at one time holding a double-figure lead over the champions, have been reeled in (this is being written on a Sunday afternoon).

Colm Corrigan, taking time out from calling the dogs home at Dundalk Stadium on Friday night, kept us informed with news from the latest joust with the ‘ould enemy, Cork City. “Dundalk are one up”, “Pat Hoban has hit the post with a penalty”, “Cork have missed two sitters”, “Mountney has made it 2-nil.” In the end, some balm for a struggling punter.

And so to Saturday afternoon. First of all, Leinster vs Munster in the rugby at the RDS. Robert Kearney’s not playing for the eastern province but his brother Dave is. Also missing from the starting 15, but on the bench, is Jonathan Sexton. Leo Cullen could be experimenting. There’s a Euro sickener from the previous week to be addressed. And it is, with a facile win for the home team. Success in the final of the lesser competition – against Glasgow - would provide some comfort.

The FA Cup final is not the attraction it once was. The magazine published every so often years ago, carrying Charles Buchan’s name, told us the story of the mid-1950s Wembley showdowns. After that we learnt from the wireless and newspapers how a Cup-winner with Dundalk, Newry-born Peter McParland, scored the two in Aston Villa’s ’57 defeat of Manchester United.

Television then brought us pictures of Spurs’ early 1960s’ double, and many years after that, Bob Stokoe’s Sunderland team, with no current Internationals included, wiped Leeds’ eye.

Your writer was travelling on the Louth senior footballers’ bus for a challenge with Cork on the day of the 1980 final between West Ham and Arsenal. Dino Kelleher organised a buster on the first scorer, and Trevor Brooking came this way. Winnings were collected, but given to the bookies that night at the Cork dogs.

The players’ names back then were easy to pronounce, Kerr, Blanchflower, Bonds etc. But it’s not like that any more. And winning the trophy doesn’t have the same importance. Still, going for the domestic treble, Manchester City were happy to collect on Saturday, wiping out Watford on a 6-0 scoreline.

As this piece runs into time-added-on, Cork hurlers are home, hosed and happy in their stable. As always, the hurling championship is going to be good.