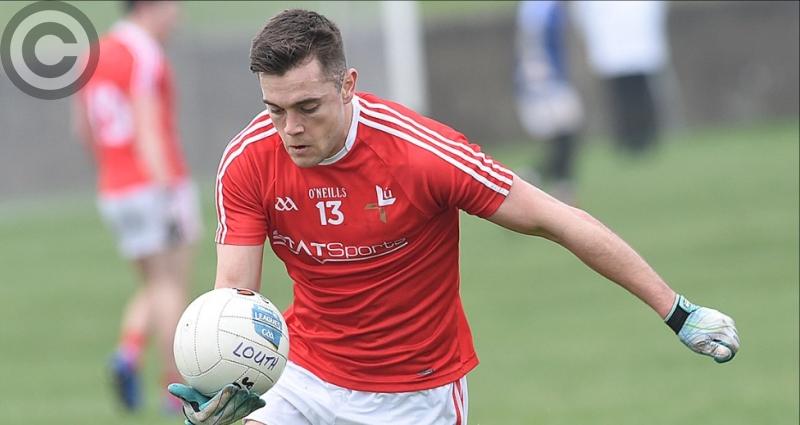 On a day where eight-in-a-row Scottish champions Celtic lost the Old Firm derby against Rangers, Louth completed their own eight on the trot in Wexford to earn an unlikely place in the Leinster Championship quarter-finals.

With nine minutes of normal time to play, the Reds looked to be heading for the qualifiers, trailing 1-14 to 0-14, with little to suggest that they could find the consistency required to regain control.

However, the introduction of Ryan Burns proved telling, with the Hunterstown Rovers man having an impact similar to the one he had during his championship debut five years ago, when he scored the decisive goal in a win over Westmeath.

The attacker hit four points, three from play, as Louth coasted over the victory line with quite an amount to spare.

Afterwards, Wexford Park’s pristine pitch was a sea of red, as the congregation from the north-east embraced those responsible for the thrilling nature of a much-needed victory. Had Louth not prevailed here, much of the promise banked from a positive National League effort would have drained, especially considering Wexford, based on spring form, are from the pyramid’s lowly lurches.

As he emerged from the post-match celebrations, Burns was a sight of emotion, fresh tears in his eyes, his mouth drier than sand, the red jersey soaked to his skin.

“Championship football is mad,” he uttered, glancing back at the centre-field scenes. “It makes your head twist, you think about it so much.

“I saw underage kids coming down and it’s important that we set the right stepping stone for them to aim to come up and be someone and follow in our footsteps.

“Louth football has to move on and Wayne (Kierans) is definitely putting the right stepping stones in place for that. Long may it continue.”

STORY OF TWO PENALTIES
For so long, the game looked to be taking the course of the hurling affair a day previous, where Sligo always looked to have that bit in reserve in comparison to Louth. A game that was level nine times, the Reds led for a mere tally of seconds at Wexford Park prior to their late comeback.

That was when Declan Byrne scored a brace inside two minutes of the second half getting underway, Wayne Kierans’ team having trailed seven-six at the interval.

Ultimately, it seemed as though the decisive stroke was going to come from Wexford’s Kevin O’Grady, who directed a 48th minute penalty past Fergal Sheekey, putting the Slaneysiders 1-11 to eleven clear and further compounding Louth’s misery at missing a spot-kick of their own.

But the referee, Tipperary’s Derek O’Mahony, played a major part in the latter incident. The visitors had started well and spurned a couple of glimpses at goal prior to Andy McDonnell’s bundling of the ball over the line in the midst of being fouled by marker Conor Carty, who was black carded.

Jim McEneaney subsequently stepped up, though his effort was weak by his usual, clinical standards and when Conall McKeever had another goalbound attempt swept off the line later in the half, the pit of one’s stomach began to churn at the thought of another championship setback.

“It could have been the story of the game, that they took their penalty and we didn’t,” Kierans observed.

“Thankfully it wasn’t the case and we were confident we’d get the chances, so it was just about taking them and that’s what the panel is there for.

“We knew we had the firepower. There’s not too many teams around Division Three and Four, or even Two, who wouldn’t have Ryan Burns in the starting XV, so that bodes well for the future.

“The championship can level things out and they played well above their league form today, Wexford, and fair play to them. But it’s a great win for us because, unfortunately, we don’t have that many championship wins over the last couple of years.”

FAMINE
Indeed, Sunday was just Louth’s ninth championship win of the last 23 played, including qualifiers, and saw them break a 39-year stretch since last prevailing against the Model County in Leinster.

But, arguably, Wexford’s need for a win here was as great, on the back of a forgettable league season and given that their last provincial victory came in 2014.

And they can feel unlucky not to have rid themselves of that unwanted record, having had a firm grip of the game for over an hour. Albeit the tie was always close and Louth were a tad unfortunate in the final third, Paul McLoughlin’s side had Ben Brosnan and Jonathan Bealin in prolific scoring form, while their opposite numbers failed to post as significantly.

The opening 22 points were shared, Louth having James Califf on song from both play and placed kicks, although many of those in red disappointed for lengthy spells, only Tommy Durnin and Anthony Williams, along with Califf, replicating something close to their league levels.

Kierans called upon Burns and William Woods, players tailor-made for the situation, and the pair were impactful, as was Eoghan Duffy further out the pitch, yet the turning point may possibly have been another blunder from the official.

A Wexford attacker looked to have been fouled with them two ahead, but play was waved on and Burns converted to reduce the arrears to a single point with two minutes to play. And, from there, with Durnin and Bevan Duffy coming to the fore in the middle, the outcome was a foregone conclusion. Louth were going to win.

“The last period of the game, the last 10 minutes were pretty awesome,” was Kierans’ summary.

Had Louth been racing on the motorway, they’d have broken the speed limit. It was a timely blitz, and one to remember.