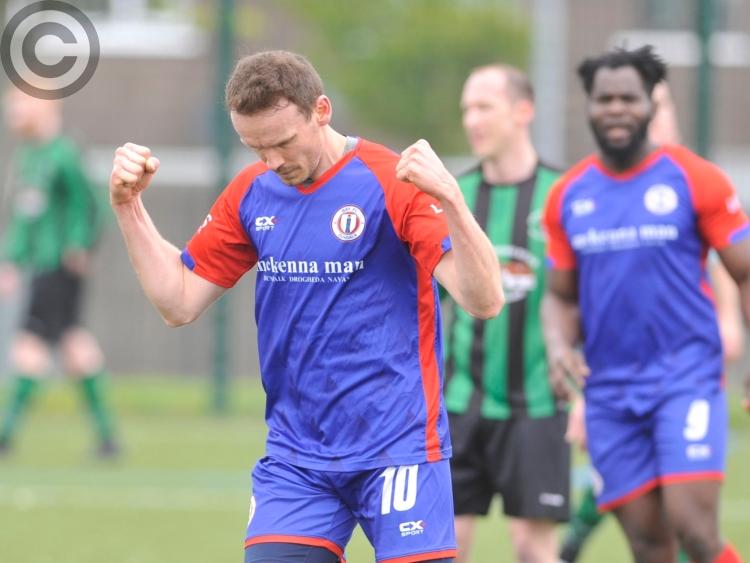 Two goals from Aaron Kerley and another from Trevor Matthews earned Square United a 3-0 derby win over Ardee Celtic on Wednesday night.

The hosts took the lead on 14 minutes when Kerley nipped in to score past Declan Butler. Ardee could have drawn level within three minutes; however, the normally so reliable Robbie Reynolds sent his penalty kick over the top and Square made it 2-0 shortly before the break when Kerley headed home Paudy Clarke's delivery.

Five minutes into the second half, Square made it 3-0 as Matthews got in on the scoring act.

Muirhevna Mor went down to a heavy defeat away to Trim Celtic on Sunday afternoon.

Marc Griffin’s men trailed 1-0 at the interval and despite second half goals from Brendan Hughes and Micky O’Kane, Trim gained some revenge for last season’s Tully Cup final defeat with five further scores.

Ardee Celtic conceded from a set-piece and the penalty spot as they lost to Parkvilla on Sunday.

The Deesiders, showing three young debutants, competed strongly and defended well, but were unable to engineer many scoring opportunities and their wait for a first league win goes on.

Despite taking the lead through Aaron Kerley’s penalty, Square suffered defeat away to Duleek on Sunday.

Duleek were on level terms by the interval and registered midway through the second half to secure all three points.

Redeemer recovered from their hammering by OMP to record a crucial victory away to Kingscourt on Thursday night.

Despite having Stephen Smith sent-off in the opening half, Wayne Conroy’s team impressed and took the lead before the interval through Andy McDermott’s fine header, with the excellent Kevin McCormack providing the delivery.

Barry Carr made it 2-0 with 10 minutes to go, finishing a move that involved Ray McCann and Decko Moran, before Kingscourt pulled a consolation back with the final kick.

Bay FC continue to impress on their Division One return after sticking seven past Albion on Sunday.

After conceding the opener, Mario Kolak, Luka Brlenic and Paddy Connor found the net for Damien Bellew’s side to hand them a 3-1 interval lead.

Quadri Olowo added two at the beginning of the second period, before Kolak and substitute Aaron Kelly got in on the scoring act. ’keeper Kevin Mullen also saved a penalty.

Concessions in the early stages of both halves cost Glenmuir away to Millmount on Sunday morning.

Conor Macken’s side dominated much of the affair, but struggled to find the final pass in a first half which resulted in Millmount taking a 1-0 lead to the break.

A surging run and deflected finish from right-back Deane Browne pulled the Hoey’s Lane men on level terms, but, almost straight away, the hosts went back in front.